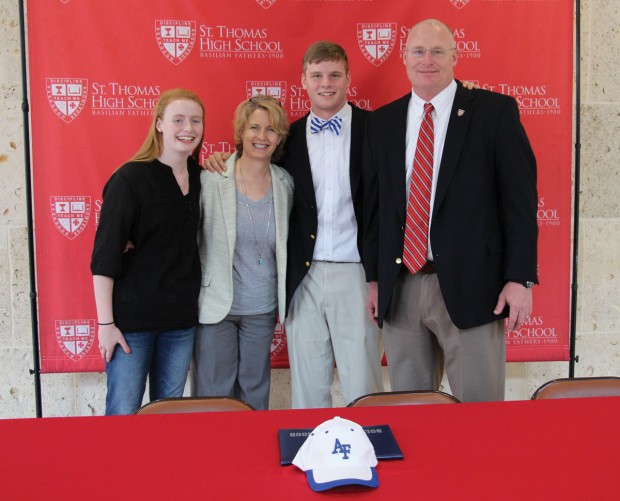 The Lamar Texans will be well represented at the collegiate-football level, with a dozen Lamar players making their college choices official on National Signing Day. A trio of those Texans will play at the highest level of college football, with prize defensive back recruit Holton Hill signing with Texas, running back Tyreik Gray going to Houston and quarterback J.W. Ketchum signing with Baylor.

Hill’s signing was considered a big feather in the cap of first-year University of Texas head coach Charlie Strong. “I really like what Coach Strong brings to the table,” said Hill. “He’s real big on discipline and doing the right thing, which is going to make be a better person. I really took that into consideration. Plus, Texas has a very defensive-minded coaching staff, which is perfect for my position.”

With Ketchum also bound for the Big 12 Conference, the two Lamar teammates will soon be opponents on the football field. “I can’t wait to play against Holton,” said Ketchum. “Going through this whole recruiting process and now celebrating with all my teammates is a great feeling.”

The signing of Gray by the University of Houston Cougars was quite noteworthy considering that the Lamar senior is rated among the top 25 running-back prospects nationwide. “I had some great schools recruit me, but I really wanted to stay close to home,” said Gray.

The Bellaire Cardinals are sending a foursome of players to college football, including Division 1 signee Xzaviar Campbell. Campbell, a standout running back for Bellaire, will attend University of Nevada, Las Vegas this fall. “It’s an unbelievable feeling,” said Campbell. “The moment I visited UNLV it felt like home. It’s a dream come true, and I’m proud to represent Bellaire at the next level.”

With the St. Thomas High School student body in attendance, Eagles senior Campbell Clarkson took center stage, and the TAPPS 5A All-State offensive lineman proudly signed his National Letter of Intent with the Air Force Academy. “What stands out more than anything else is the commitment to serve the country,” said Clarkson. “That’s what means the most.”

“When you watch Air Force play, it’s similar to St. Thomas,” said Carson’s father and St. Thomas assistant football coach Tim Clarkson. “They may not always be the biggest, strongest and the fastest, but they are players of great determination and resiliency. That was one of the biggest things that appealed to Campbell.” 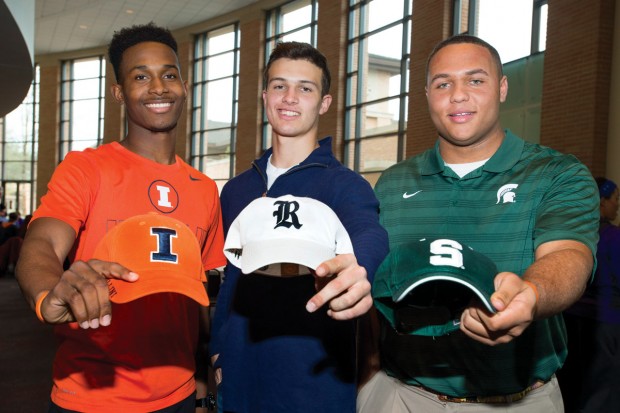 Over at St. Pius, a foursome of Panthers signed to play college football, including wide receiver Jalen Smith, who is heading to Fresno State. “It’s an honor and a privilege to play at the top level of football at such a great program,” said Smith. “I’m ready for the challenge.”

The signings also mark the second straight year that Kinkaid has sent three players to the highest level of college football, which is remarkably impressive for a small private school. “The coaches out there know that we have high-character kids who are academically sound and ready for college,” added Larned. “Needless to say, we’ve also produced some extremely talented football players in recent seasons.”

In soccer, the Memorial Mustangs girls kicked off the season by winning the Spring Branch ISD Tournament for the second consecutive season. “There was a lot of really strong competition,” said Mustangs head coach Lindley Amarantos. “It was also one of our goals to repeat as tournament champions. We defeated a real good North Shore team in the opener, and that’s kind of set the tone for the rest of the season.”

Among the players setting an excellent tone for the Mustangs is junior forward Amy Nguyen, who leads the team in scoring and has already committed to play collegiate soccer at Oklahoma State. In addition, Amarantos had high praise for junior Sarika Legge and senior captains Rebekah Koehn and Riley Shivitz. “Sarika anchors our defense while Rebekah is kind of the heart and soul of our team.”