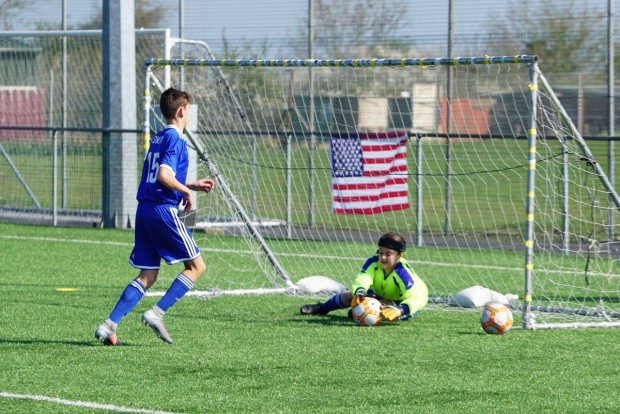 Caroline Meade was your typical soccer-playing eighth grader. Her love of soccer began during recess on the Condit Elementary playground. When she was six, she was thrilled to be part of a Weekley Family YMCA soccer team with real uniforms. Through the years she participated in Bellaire Rec Soccer and West U Rec Soccer Leagues. As a T.H. Rogers middle schooler, Caroline proved smart enough to handle her school’s high academic bar, successfully juggling homework and other responsibilities, including proudly wearing a T.H. Rogers Ram’s goalie jersey. Unfortunately, life was about to kick Caroline some hard-to-block challenges.

Early in 2018, Caroline’s parents, David and Rania, could tell something was different about Caroline. Rania shared, “Her personality wasn’t the same. Things seemed to be getting worse and we weren’t sure of the best way to handle the situation.” They decided to admit her to the Menninger Clinic’s inpatient program, which treats complex mental illness for adults and children.

Caroline said, “When I went to get treatment, it was very helpful to be around other kids dealing with issues just like me. People shouldn’t be embarrassed or scared to get help for depression or any other mental illness if they need it. I met some other great teenagers while I was participating in the program. Some I still keep up with.” 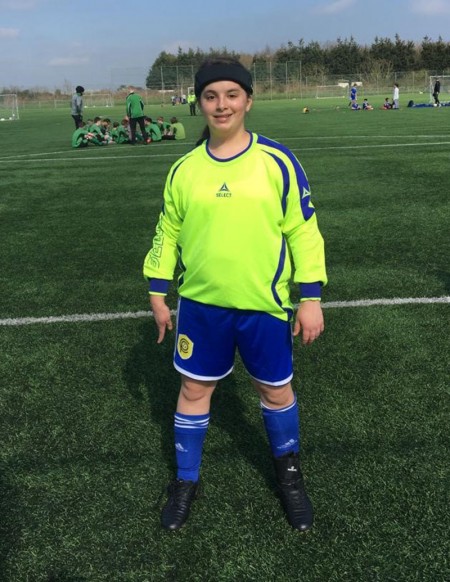 Caroline Meade takes a moment to smile for the camera as she proudly wears her USA CP Soccer goalie jersey. Caroline was thrilled that she had the honor of being part of the team.

In addition to psychological tests, Menninger also ran physical tests. In February 2018, the family received an answer as to why Caroline’s mood had changed so radically: She was diagnosed with Craniopharyngioma, a rare type of brain tumor. This tumor is normally benign but can affect vision and the pituitary glands’ monitoring of hormones, physical growth and likely contributed to Caroline’s depression.

The months ahead were a blur for Caroline, her parents, and her older brother, Donovan.

In March, Caroline had surgery to remove the tumor. Unfortunately, during the procedure, Caroline suffered a stroke. Physically, her body wasn’t affected too severely, but verbally and cognitively, Caroline experienced aphasia, which impairs the ability to speak and understand others.

In April, Caroline transferred from Memorial Hermann Children’s Hospital to Shriners Hospital for two months of rehab and was able to come home in May. Since last June, Caroline has made lots of progress but continues outpatient treatment of speech and physical therapies. 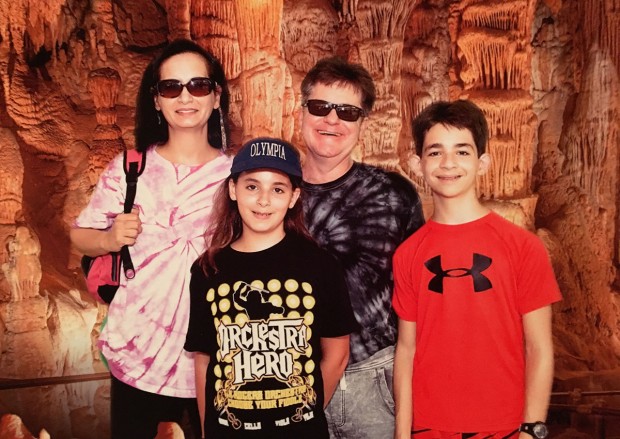 Rania, Caroline, David and Donovan Meade enjoying a family vacation at Luray Caverns in Virginia the summer of 2016.

During recovery, there have been good and bad days. One of the best moments happened last fall at The Institute for Rehabilitation and Research when Caroline’s physical therapist, Shannon, told her about a new youth sports organization called CP Soccer. A man named Deven Hull had recently given a presentation about CP Soccer to the physical therapists at TIRR and, knowing how much Caroline loved soccer, Shannon thought it would be a great fit.

CP Soccer is an adaption of soccer for athletes ages 7-18 with ambulatory cerebral palsy and other neurological disorders, such as stroke and traumatic brain injury. The program has existed in other countries for years but started in the United States in 2017 when two soccer-loving families, both of whom had children whose lives had been impacted by strokes, launched the league with the first team in New Jersey.

In the fall of 2018, four more cities including Houston added CP teams. Deven and Catherine Hull loved the concept and committed to growing the program in Houston. Their son, Gabriel, had a stroke in utero and was affected on his right side. Gabriel started playing soccer when he was six and now plays for the Houston Dynamo South 02 Orange team and has participated in multiple camps and tournaments for the US National Paralympic team.

CP Soccer Houston partnered with The Houston Dynamo/Dash Youth Soccer Club (HDDY) for boys and girls. The club is unique as it is the first time Major League Soccer teams have sponsored a youth soccer program. HDDY supports CP Soccer in numerous ways including field space, equipment, storage and coaches.

Deven recalled, “We were so excited to have our first practice last fall. Although things started off a little bumpy when just one child showed up and he felt a little sick to his stomach after running around for a short time. While he sat down for a drink of water Coach Keith [Johnson] came and chatted with him and encouraged the boy to come back out. They ended up being on the field for another hour and the boy had a big smile on his face the whole time.”

Coach Keith “Muck” Johnson has been playing soccer since he was 5 years old even though a stroke in utero affected his left side. He is a veteran US Paralympic National Team goalie who has had 101 appearances for the United States including Paralympic Games, World Cups and Parapan American Games.

The CP Soccer Houston’s team roster has continued to grow. They were thrilled when Caroline joined. She was happy to return to her favorite position and is now the team’s official goalie. She is one of the older kids on the team and one of the only with previous soccer experience, so she’s been able to mentor her teammates.

Caroline said, “I like playing soccer with people who are the same age as me that have CP (cerebral palsy) or had a TBI (traumatic brain injury). Even one of my coaches had a stroke. I enjoyed myself when I was on a team again since I hadn’t played since before my stroke.”

Coach Keith said, “One of my favorite parts of coaching is seeing the smiles on the kids’ faces and watching them progress to the next level. Parents love seeing the kids working hard and having fun. I wish this program would have been available when I was younger.” 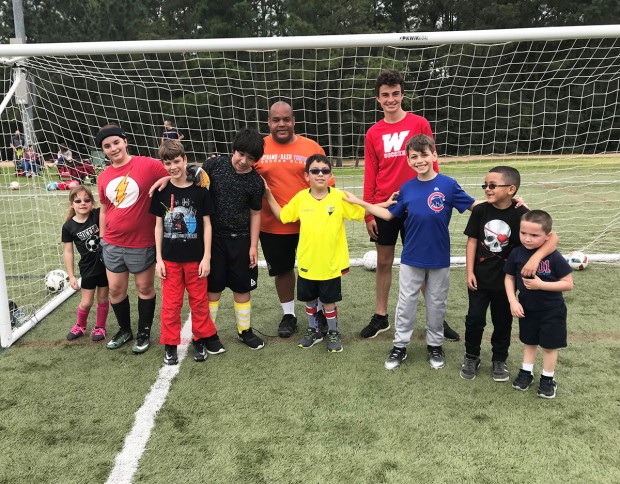 The CP Soccer Houston team strikes a pose for a group photo during practice. Caroline is pictured second from the left and Coach Keith Johnson is in the middle wearing an orange shirt.

Phil Ebner, the director of the Dynamo/Dash Youth Academy Program, shared the league’s enthusiasm. “We are so proud of Keith and Deven and what they’ve done for the CP soccer program in just nine months. We are excited to watch it continue to grow,” he said.

Caroline’s dad, David, said. “Caroline is so happy to be playing on a team again. If it weren't for CP soccer, she probably wouldn’t be playing. She is getting exercise in a fun way and has new friends. She even got to go to Ireland, which would not have happened otherwise.”

In March 2019, the CP Soccer national coaches fielded a team of 17 Under 14 (U14) players to compete in the Dublin International CP Football Festival and invited Caroline to be part of the team. The event was called the Friendship Cup and the players competed in 10 matches against teams representing Ireland, Northern Ireland, Scotland and England.

Caroline didn’t know a single person on the team before heading to Ireland but left with many new friends. Her other US CP Teammates came from teams in New Jersey, the Mid Atlantic, New York City, South Florida, New England and Atlanta. 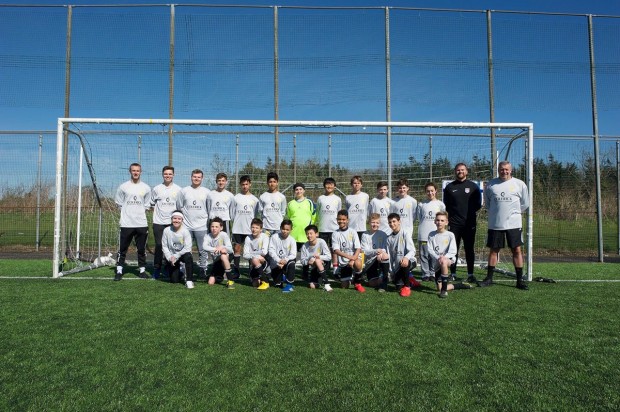 USA CP Soccer Team at the Friendship Cup in Dublin, Ireland. Caroline Meade, wearing the yellow goalie jersey, was the one player from the Houston team. Teammates came from across the United States.

Caroline’s dad, David, who travelled to Dublin with her, said, “Everyone was very nice and supportive. The kids all try their best but they know it's for fun. The parents and coaches, including ones from other countries, were fun to talk with.”

When Caroline isn’t busy being an international soccer star, she is working hard on her therapy and keeping up with schoolwork at Xavier Educational Academy.

Caroline and her mom recently returned from Florida after six weeks of an intensive speech therapy program. Caroline is looking forward to heading to CP Soccer Camp at Clemson University the last week of June, which will be a chance to reunite with some of her teammates from the Friendship Cup in Ireland, meet new friends and have a blast playing soccer.

Caroline, now age 15, has handled tough obstacles like a pro and been an inspiration to many. Caroline’s family lives in Bellaire but are happy to make the commute to the Woodlands for practices and games. Rania shared, “It’s worth the drive because Caroline is so happy. But would be wonderful to recruit enough players centrally located to have practice closer to home!”

The 2019-20 season of Houston CP Soccer will start in September. Practices and games typically take place on Saturdays. No soccer experience is needed to join CP Soccer. Caroline said, “I would encourage a kid with CP (or who had a stroke) to join because it is fun to meet people and play soccer with people like me.” 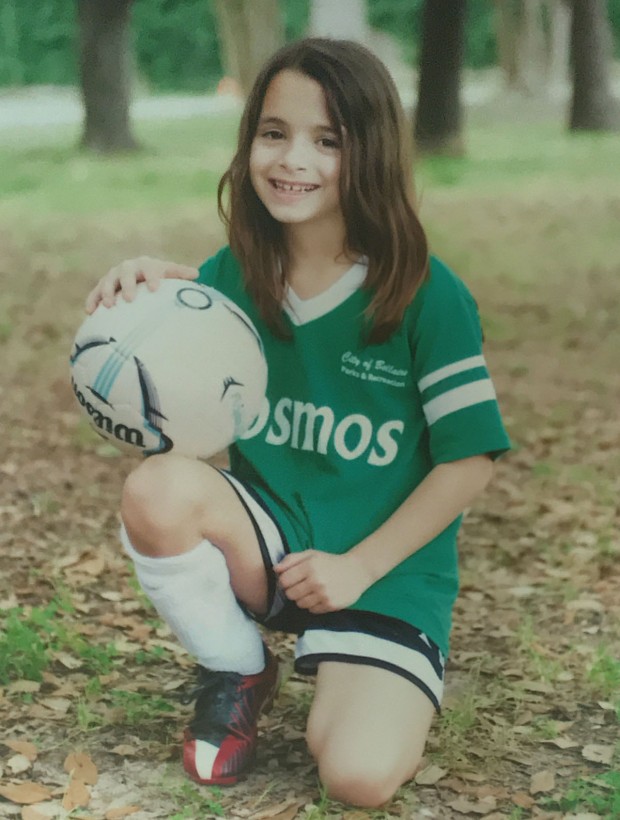