Conserve to Preserve at Lamar 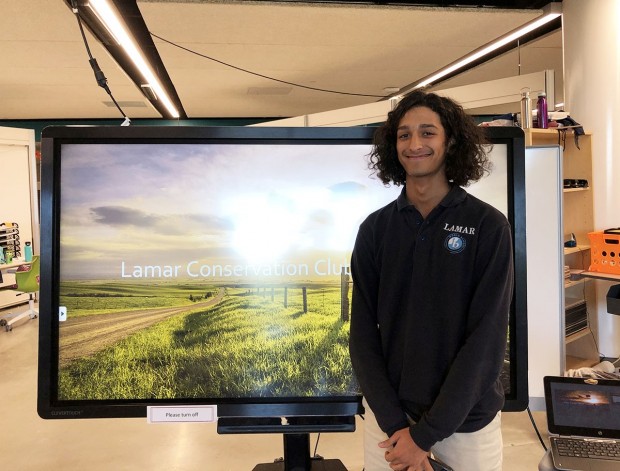 Melvin Zarghooni presents an overview of the Lamar Conservation Club.

The World Series was not the only exciting thing happening recently, as Lamar’s Conservation Club also met for the first time this year. The meeting had a good turnout as they discussed the goals and plans of the Conservation Club for the upcoming year. Along with the tasty cupcakes and cookies that were provided, we were also given a short introduction to the club.

Melvin realizes the impact that we have on the environment and would like to spread that awareness to others. He said, “Preserving the environment is very important because we must take care of the earth that we live in. All the pollution and waste that we produce might get put out of sight, however it is still on our planet and affects the equilibrium of the environment.” During the meeting, Melvin brought up that 2.12 billion tons of waste are created each year, and this seeks to threatens our sustainability.

The goal of the conservation club is to promote sustainable living by promoting a healthy living style. As part of Lamar’s National Honor Society (NHS), Melvin saw a good opportunity for a partnership. He said, “My goals for the club are to spread awareness about how to conserve and have volunteering opportunities in partnership with NHS.”

Conservation Club seeks to provide unique volunteering opportunities for their members, but also makes it a goal to deepen their members’ knowledge and understanding. When asked what members can expect to get out of joining, Melvin explains that “members can expect to learn more about the philosophy and real ways to better the planet” and he hopes that members realize that it’s important to not only act, but also to remain educated on the ethics and issues concerning conservation. John Butler is a member of the Conservation Club because “it’s a cool experience to be a part of something that is helping the world around us.”

The Conservation Club meets biweekly in the lab in Neighborhood 11C. Topics included in the next meeting will include more information on upcoming events as well as a discussion on club t-shirts. This year, dues are not required and everyone is encouraged to join and to become a part of Lamar’s Conservation Club!