The Gift of Fun

Presents from the best uncle and aunt 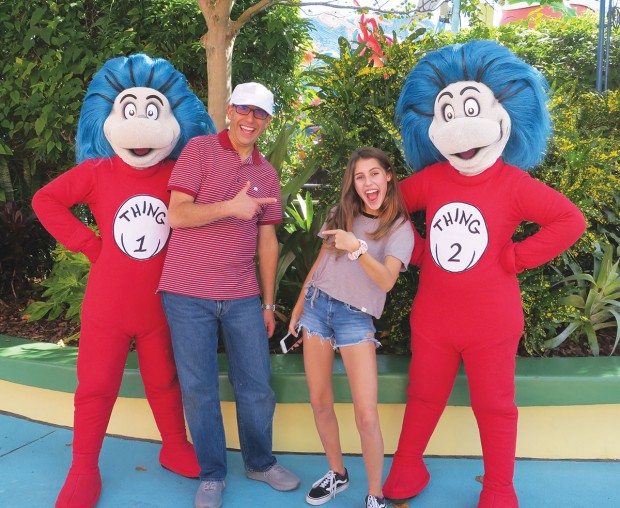 Mark Kunik, wife Mardi Kunik (not pictured) and their niece Reese Kunik (at right) had plenty of inside jokes after they returned from Reese’s birthday trip to Universal Studios.

If there were an award for best gift-givers, Mark and Mardi Kunik would most definitely be in the running.

Their gifts for nieces’ and nephews’ bat and bar mitzvahs – a Jewish coming of age ritual celebrated at age 13 – are not your standard clothing item, electronic gadget or gift card. Instead, the gift is a list of experiences the new teen gets to choose from. The list might include a trip to an amusement park, a pop concert or a Caribbean cruise, with Mark and Mardi.

“They’re really special,” says Mark, a psychiatrist. “It’s just them with the two of us.”

In coming up with the list, Mark thinks about the kids’ interests as well as what their parents do not enjoy doing. When his nephew Maddox celebrated his bar mitzvah three and a half years ago, the top item on the list was a cruise from Galveston – Maddox’s parents aren’t big cruise fans. And when Maddox’s younger sister, Reese, celebrated her bat mitzvah last year, they went on a trip to Universal Studios. Reese was excited since her dad, Mark’s younger brother, is not one to ride roller coasters.

“My dad never goes on them because he says, ‘Oh, I’m too old for that,’” says Reese. “My uncle loves roller coasters, and it was fun to go on them with someone who is family.”

Like anything, becoming an exceptional gift-giver takes effort. Before Mark and Mardi started gifting experiences about five years ago, their go-to gift – like many of us – was an American Express gift card.

“We’d send a gift card, and it would just get lost with all the other gifts that are given,” says Mark. “There’s no thought from the giver’s end or the receiver’s end about the gift. It’s just kind of, more often than not, taken for granted.”

But if not a gift card, what do you buy a kid you don’t even know all that well? All of Mark and Mardi's nieces and nephews live outside of Houston, so they don’t see them all that often. Choosing a physical gift for them proved difficult.

“It was hit or miss,” says Mark. They’ve had mixed success with his material gifts, which have ranged from “eccentric pajamas” with soccer balls on them to magic kits and chemistry activity sets. “I’d try to find something unusual, something I thought would be memorable and tailored to that person.”

Mardi says, “Most of these kids don’t want or need anything anymore. Moving to the experience was much better for us.” 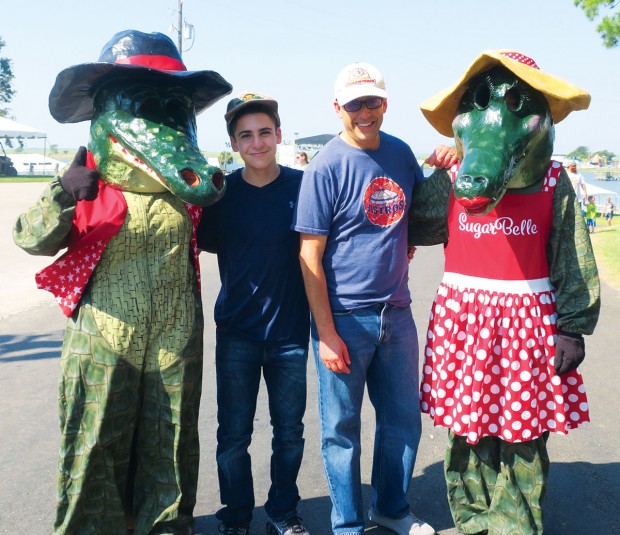 Mark Kunik (at right) took his cousin’s son, Jake Fallek (at left), on a full-day adventure for his 13th birthday, first stopping in Anahuac to attend Gatorfest.

“Jake lives in McAllen and wanted to go to a Texans game because they don’t have professional football,” Mark said. “I picked him up from the airport and took him to Gatorfest in Anahuac. It kind of celebrates the beginning of gator season. Then we drove back to Houston and had lunch in Chinatown, stopped by the Beer Can House and then saw the football game. It was really memorable.”

The trips make for great bonding opportunities. The couple now has inside jokes with each of their nieces and nephews. And since their own kids are in their 20s, they appreciate spending the time with younger ones.

“You have the child without the parents, and you’re with them 24/7, so you really get to know them,” says Mardi.

Next, Mark and Mardi are looking forward to planning something for their 12-year-old nephew who lives in Denver as well as for their twin nephews in Austin.

“My cousins are already talking about what they want to do for their trip, and they are only 10 years old,” says Reese, who says she loved her Universal Studios trip.

“That was the only gift I’ve ever gotten like that. Getting to go on a whole adventure – that’s amazing.”

Editor’s note: We’d love to hear about “experience” gifts you’ve given or received. If you are up for sharing, email [email protected] or leave a comment below.