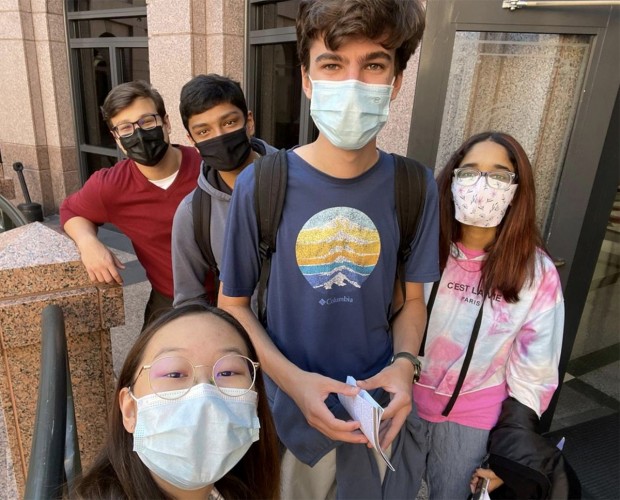 Joao Borges, Parth Gupta, Alexander Ilacqua, Aditi Iyer, and Caroline Hsu (pictured, from left) at the Texas Capital building before the closing ceremonies of the conference.

From Friday, Nov. 5 to Sunday, Nov. 7, The Village High School Model United Nations team traveled to the University of Texas at Austin for the Fall Central Texas MUN conference. The VHSMUN team has a reputation of consistently emerging as the Best Large Delegation. This year, Vikings did not fail to impress once again. From Indian revolutionaries to nuclear warfare to Napoleonic wars, not only did delegates embrace a global mindset in their committees but they also had a blast on the trip.

What’s special about this conference is that for the first time in years, VHSMUN had a team consisting of over 70% novices. Despite this, with a strong leadership team and unwavering support from advisors, the team was able to hold out its reputation as Best Large Delegation.

“The reason we are so successful no matter what is because we treat and support each other like family,” said junior Kahani Malhotra, the VHSMUN President of the General Assembly. “It doesn’t matter whether we have a group of advanced delegates or a novice-heavy team, when you have genuine love between a group of people and when you have students that just want to know more about the crazy world around them, nothing else matters.”

Aside from the astounding amount of individual success, the delegates attained in their committees, although grueling - the trip experience ended up being a heartfelt bonding experience for novices and senior delegates alike. It seemed as if everyone found their voice and special place on the team.

“I would describe my first trip as surreal really,” said junior Joao Borges, a new delegate on the team. “I wasn't expecting it to go that well. I thought I would be extremely unprepared for it and I was extremely nervous, but once I got there it was really easy to speak and voice my opinions in my committee. My favorite part of the trip was getting to know so many people from different schools, as well as a lot of people from Village. I got to make a lot of new friends and feel like I belonged in the club. I learned so much about both myself and about MUN and I don't think it could have gone any better.”

The team ended their trip with 10 overall awards: 1 best delegate award, 3 honorable mentions, 4 outstanding delegate awards, and 3 best position paper awards. Given that this year 70% of the VHSMUN team consists of novice delegates, Viking diplomats have proven that they are unstoppable anywhere and any day.