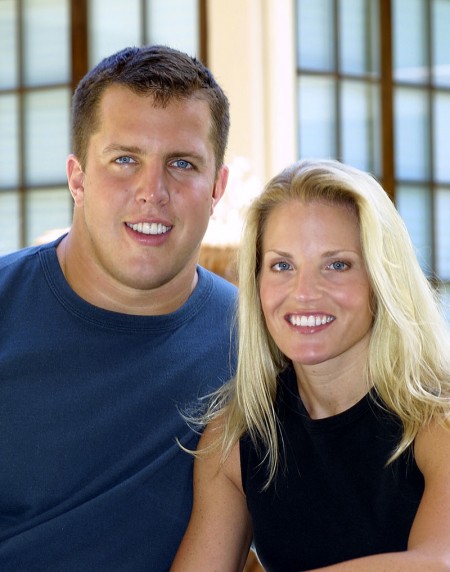 A new city and football team aren’t all that Houston Texan football player Seth Payne is adjusting to. Having recently moved into to a lavish, 5,400 square feet showcase home in Bellaire, he and his wife, Brandi, have a cleaning woman for the first time.

“Are you finished?” Payne asked her as she left their modern kitchen one afternoon. “I think Brandi has a check for you.”

Sitting at his glass dining room table, Payne, 27, appeared out of his element, “I’m still not used to that. We’re just farm kids from New York.”

Having both grown up in small towns in upstate New York, the Paynes, who relocated to Houston last February after Seth’s stint with the Jacksonville Jaguars, chose to live in Bellaire partly to reclaim that “small-town feeling.”

“Just registering everything at the city was the best experience,” Seth said, commenting on the short lines and friendly faces. “The receptionist (Tillie Wiedemann) is like your best friend’s mother.”

And, the Paynes are not alone. Two other Texans, including kicker Kris Brown, 25, also purchased homes in Bellaire, offering an unintentional snub to Sugar Land, the preferred residential area for most players. (The third Texan wished to remain anonymous.) 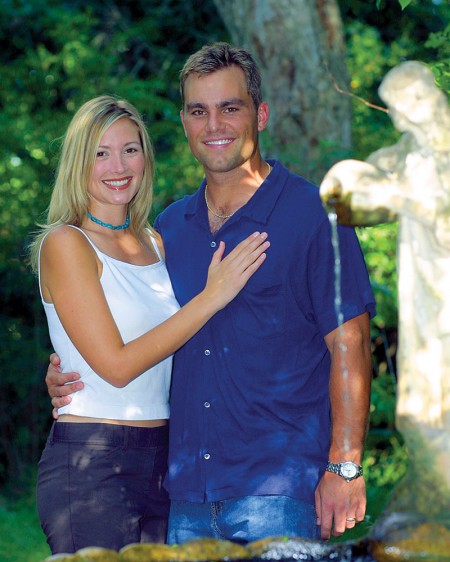 Once Brown clocked the mileage from the suburbs to Reliant Stadium, where the players play and practice, he said “I’m not driving all this time in a car.” So, he bought a four-bedroom home in the city where police make house checks for people who frequently vacation.

And if the short drive to work won’t keep him here, Jax Grill will. Brown and his wife, Amy, frequent the place like teen-agers at a Starbucks. “How many quesadillas have I eaten there?” Amy asked, adding that her husband prefers the tortilla soup.

Mayor Mary Ann Goode has lived in Bellaire since 1955 and believes its reputation as an inner-city suburb is finally catching on. “Bellaire has for many years been written up as the best small city in Texas to live in,” she said. “I would bet you anything we’ve never had three sports celebrities living in Bellaire.”

So far, however, none of the players say they have been recognized despite the pervasive media attention. Of course, the regular season has not yet begun.

Over the past several months, the players and their wives have been poking their heads into the nooks and crannies of the city, trying to acclimate.

Brandi likes to visit Magpies on Bellaire Blvd. and has made countless trips to Bering’s to put the final touches on their four-bedroom home. (They turned the fifth bedroom into a gym.)

About a month ago, City Manager Bernie Satterwhite, their backyard neighbor, invited them over for barbecue and to meet the mayor. 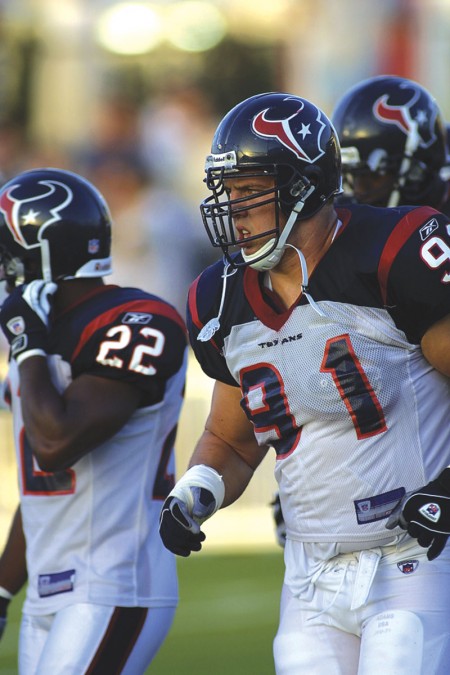 “I think he’s great,” Satterwhite said of his 303-pound neighbor, a defensive tackle. “He’s a big guy, very impressive, very well-spoken.” Insisting he is not trying to score season tickets, Satterwhite said he would be rooting hard for the Texans. “I’m a football fanatic. I have no allegiance to the Titans now.”

Through some local connections, the Browns were welcomed to Houston with an invitation to lunch from former Houston mayor Bob Lanier.

“Everybody has been so sweet to us,” Amy said. “They’ve shown us around.”

Now that she knows the major sites of Houston, Amy leads the couple’s out-of-town friends on tours of her own: She drives down the “cute streets” of Bellaire and West University, to Reliant Stadium, through Rice Village and River Oaks, and back home.

“I’m the hostess with the mostess on weekends,” said Amy, who worked with deaf children when the couple lived in Pittsburgh and Kris played for the Steelers.

Brandi is a former teacher and basketball coach for a Florida school and claims her sports fanaticism rivals her husband’s.

When it comes to football, “I’ve always wanted to play,” she said.

Her husband fervently nods: “She’s a better thrower than I am. She throws a tight spiral.”

Of course, talk about football is much heavier on the field, as the players rev up for the team’s inaugural season. While many don’t like to admit it, a secret agenda for putting the Dallas Cowboys and Tennessee Titans in their places circles through the air.

“Everybody wants us to beat the Cowboys,” Seth said. “It doesn’t matter if we’re 1 and 15, as long as we beat Dallas. There are a lot of strong feelings about Tennessee and Dallas.” 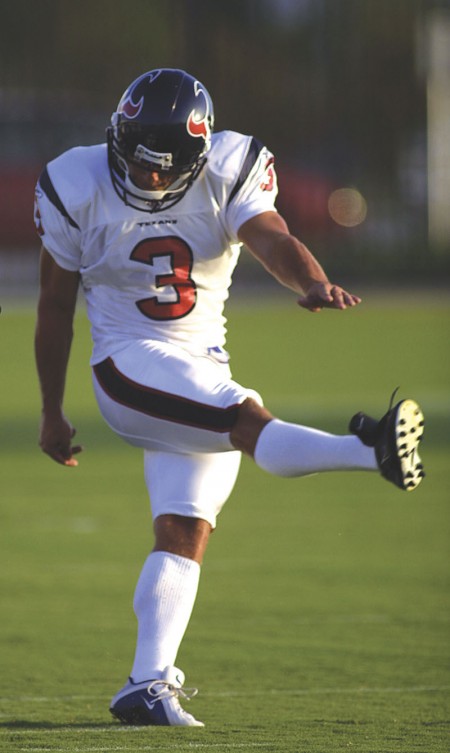 Others are happy simply because the city has reclaimed a professional sport.

“So much excitement is building throughout the city,” Kris said. “Fans are excited to have a team back.”

In fact, hosting the Super Bowl in 2004 is mere icing on the cake. “It’s going to be great for the city,” Kris said. “The stadium is first class. There’s not one in the league you can compare it to.”

While Seth’s and Kris’ lives revolve around football, neither thinks it odd that they have chosen to live in a city where baseball dominates the playing fields.

Kris, an avid golfer and baseball fan, said he likes that young children in Bellaire grow up learning the importance of teamwork. He said he hopes the presence of professional sports players in the community enhances that notion.

“Some people make us out to be bigger than we are,” he said, adding that part of being a role model is being a regular person. “It’s nice for people to see we’re ordinary people.”

Using one’s celebrity in positive ways can change people and communities, said Seth, who is known for visiting children in hospitals and introducing them to their favorite players.

“It gives you the opportunity to help kids that you wouldn’t get to if you weren’t a football player,” he said. “It’s a fun thing to do.”

Heather Saucier is a freelance writer in Houston.