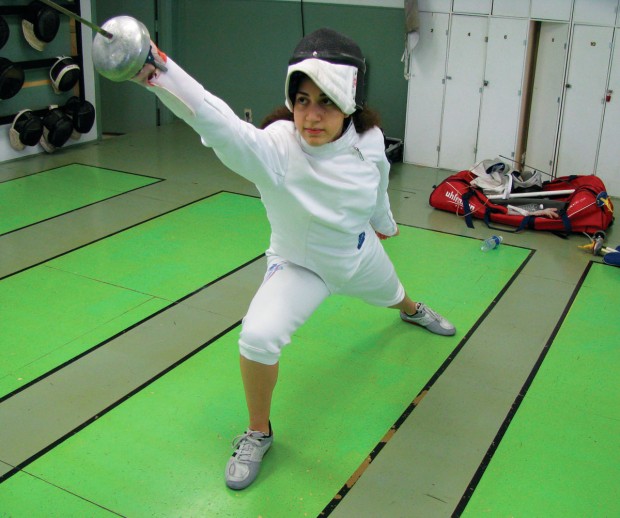 Liz Donnenberg, 15, likes the mental aspects of fencing used to figure out her opponents.

You know those moms who complain about driving to all their kid’s sports activities, the ones who go on about how their tyke needs to be ferried to soccer, basketball, baseball, swim team, and so on?

They sigh. But look closer. Underneath their burdened expression lurks the barely contained satisfaction of a proud mama.

We see it. We—the moms of the non-sports kids—smile and ask polite questions. Sometimes we fish for information: “So, do you ever have to make your kid go to practice?” “Does he like it?”

“Oh, yeah, he loves it,” is a common response. And we glance over at our kid, who is sitting still, reading his book, completely ignoring the running kids.

But occasionally, we hear glimmers of another dynamic. One woman I know cheerfully admits to forcing her girls to play soccer against their will.

“It’s good for them,” she says. “When I was little, I was never made to do anything. So I can’t do anything.”

What to do? We know the dangers of overscheduling our kids and how we’re supposed to respect our child’s innate inclinations.

On the other hand, we hear about how kids today are overweight, how they sit still too much, and don’t move their bodies.

Perhaps worse, we remember (or were one of) those kids who were left out because they couldn’t throw a ball, or dodge the dodgeball, or tease each other in the easy manner that teammates instinctively have.

The good news is if your child is at all motivated to find a sport, be assured there is one out there. Just cast your net wide and look beyond the obvious.

Laurel Agris’s son, 8-year-old Mason Cole, is a star academically, and he plays chess for hours. But in sports, he struggled. It didn’t help that he was small for his age.

“He couldn’t catch the ball. He couldn’t hit the ball. We tried gymnastics. He’d flop sideways doing a somersault,” she says. “If he didn’t care, then I wouldn’t have cared. But he wanted to find something.”

Mason found his calling with tae kwon do. The Korean martial art combines the mental and physical. Mason began taking lessons at Young Brothers Tae Kwon Do, and memorized Korean terms and complicated kata forms. His size was no hindrance.

Now, when he must participate in “Share Your Talent Day” at school, he has something to show off. He is working on his black belt, and mom says his self-esteem has skyrocketed.

For Liz Donnenberg, karate didn’t do the trick. Soccer was a nightmare. As mom Vicki remembers it, “She would stand in the middle of the field and just cry.” Vicki later learned that Liz’s dyslexia may have contributed to her difficulty with team sports.

But everything changed when Liz tried fencing one summer and discovered that she was good at it. Now 15, Liz has fenced for years at Salle Mauro Fencing Academy and has achieved the highest rating, an A, in epee (one of three fencing weapons). She hopes to win a college scholarship and make the 2012 Olympics.

“It’s all mental,” she says of fencing. “It’s your willpower, who wants to win the most, and figuring out your opponent. It’s like physical chess.”

Many kids who don’t like sports will try fencing, thanks to swords and swashbuckling fantasies. Vicki says fencing tournaments have “a completely different feeling than going to a football game. A lot of fencers look like people you’d see at the library.”

At the Texas Rock Gym, with its expanse of walls dotted with colorful grips, you see another sort of athlete. There, as rock music plays, members of a youth climbing team scurry up and down, preparing for indoor competitions and outdoor adventures.

Stuart Cook, 11, “belays” a safety line while Gus Cotton, 12, hangs from above, totally dependent on his partner. Gus hollers down: “All the other sports are man against man. But this is man against Mother Nature. Mother Nature can kick your butt any time.”

Some sports, like archery, require less movement (making it ideal for athletes in wheelchairs) but no less body control. “I equate it to being like a violinist. It comes down to eye coordination and ability to focus,” says Kevin Whiteford of Viking Archery.

Margaret Fowler, a 13-year-old archer who says she earned the No. 1 spot in Texas in 2006 for her age group, likes that her sport makes her think, and that it’s unique.

“When you tell people about it,” she said, “they’re like ‘Wow, you’re interesting.’ ” 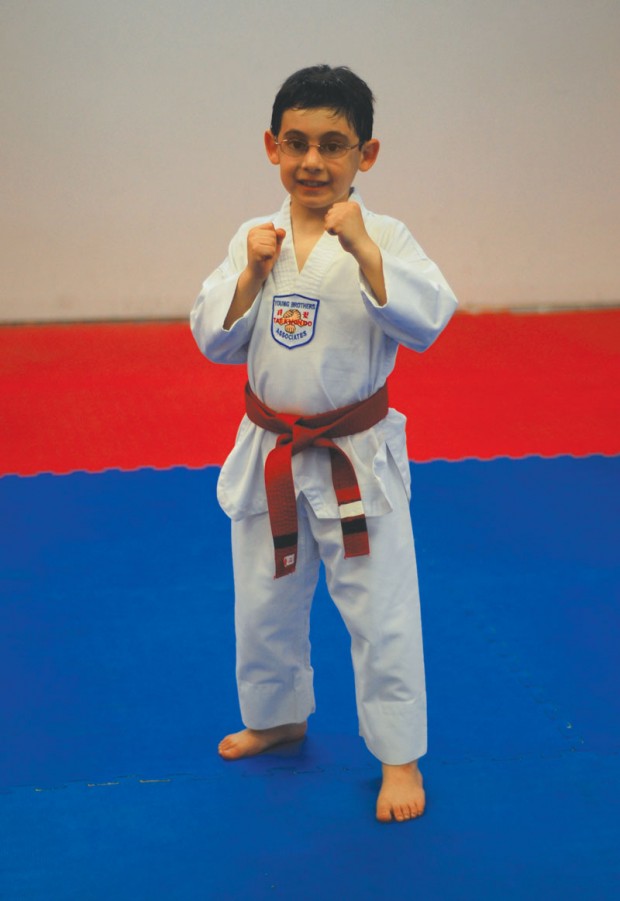 Mason Cole, 8, struggled in sports until he discovered tae kwon do. Now he is working on his black belt.

Margaret Fowler, 13, likes that archery is “a thinking sport.”