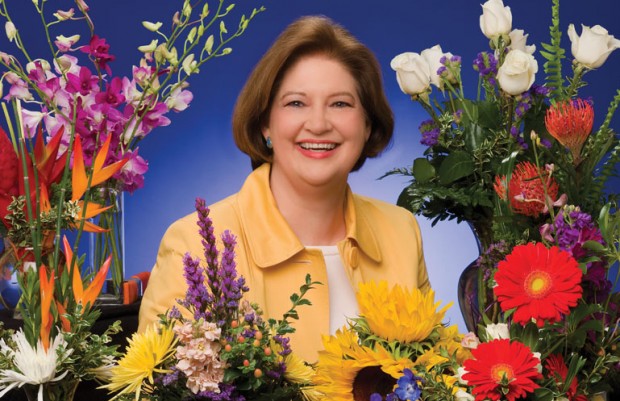 Never being able to say the word ‘mummy’ again in your life sounds like a small thing,” Prince William of Wales said last month. “However, for many, including me, it’s now really just a word – hollow and evoking only memories.”

The prince gave voice to what many will be feeling this Mother’s Day. For those who have lost a mother, there will be no phone calls, no cards, no flowers. But some who have lost their mothers have found a way to laugh with the tears and smile through the sadness.

“I can tell you the day is often not easy.” It has been decades since Dee Dee Dochen last said goodbye to her mother, Janet. Even today, you can hear her voice catch while she is laughing about a fond memory.

“It is not until you have been there that you understand the deep, deep pain,” says Dee Dee. “I can either curl up and crawl under a rock, which you feel like doing, or do something with it.”

Dee Dee stumbled on one way to ease the pain while wearing some of her mother’s clothes, including “a beautiful evening cape that is real unusual.”

Whether it is her mother’s cape, fancy gloves or sunglasses, someone always is asking where she got them, which gives her the opportunity to tell them.

“I love to talk about them, and I proudly talk about them,” says Dee Dee. “She was very much a lady, and it is fun to wear her things. Doing that makes me feel like she is with me.”

It allows Dee Dee to talk not about the loss of the woman she loves so much, but about her mom’s great fashion sense.

It was clothing of a different kind that helped Mark Sass come to grips with his mother’s passing. A pair of Keds, to be exact.

“My mom had a lot of circulatory problems. She could only find one pair of shoes she liked,” says Mark. “We would take her everywhere possible to buy every color, so they could go with all of the different outfits.”

After Carol Sass passed away, Mark’s wife, Mary,  had one of the pairs bronzed. The shoes sit on the stairs just where she would always leave them.

“If you knew my mother, then you knew it was the perfect thing to do,” says Mark. “She would have rather been remembered in this way than as some staggering loss.”

He says small things, like seeing the shoes every day, have made the transition from sadness to joy easier.

“At first it was bittersweet. It would constantly remind me of our loss,” says Mark. “Now it reminds me of all the good things we used to have, everything she meant to us.” 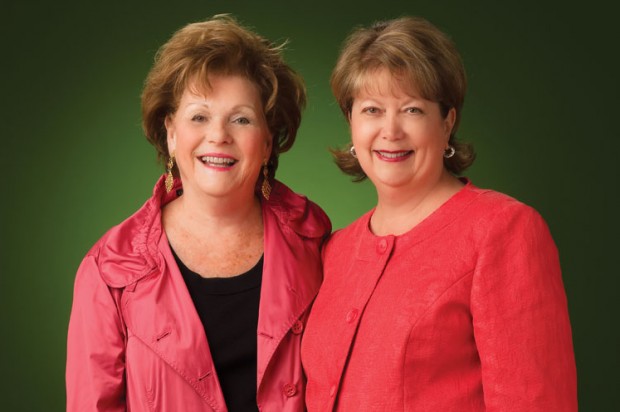 “For me, it’s getting a whiff of her perfume,” Blair Belin says of her mother, BJ McDonald who passed away 20 years ago. “It is a way to still connect. It’s just physical remembrance of who that person was.”

One Christmas, Blair’s husband Greg surprised her with a shadow box full of her mother’s golf things.

“Her hat was in there, her gloves, her bag tags …,” says Blair. The box hangs in her kitchen where she sees it every day. “It’s a real comfort. It makes me smile about my mom.”

Like many people, Blair shares the loss of a mother with her mother-in-law, Mary Ann. The two have found solace in sharing “mother stories” with each other.

It was not the loss of her mother, but of her mother-in-law, that led Sue Botts to discover her way through grief in the form of a flower pot.

“She was in three garden clubs,” Sue brags about mother-in-law Ione Strange’s green thumb. When Ione had a stroke, it was Sue who became her link to her old friends.

“She had this tradition of giving gifts to her bridge partners and neighbors,” says Sue. “Eventually, we started doing orchids because they lasted so long.”

When Ione passed away, Sue kept up the flower tradition. With every flower given, she found a happiness that made it easier to get through the grief of losing Ione.

“You see something so pretty and delicate, and yet it is strong and lasting,” says Sue. “It is vital that other people miss them as well. Yet it brings back a time when they were alive. It stirs those memories, those good memories.”

Memories of Spanish music and dancing feet are helping Gina Cagna-Pack work through the loss of her mother, Mercy.

"It was her spirit. She danced in the kitchen. She danced everywhere,” says the Cuban-born daughter. “There is nothing that would glorify her spirit more than dance.”

So a year after Mercy passed away, her daughter and grandson, Noble, signed up for salsa classes. “I started to move my body the way she moved her body, and the teacher was like, ‘Whoa, whoa …!’ ” laughs Gina. “I think my mom is definitely smiling and going ‘good job.’"

Gina says whether it is keeping the music and dance alive in her house or conquering her fear of the pressure cooker her mother loved, it is all about holding on to those things that made her mother unique. And by doing that, her sadness has turned into a celebration of spirit.

Gina says, “I think that when you leave, you want to think you have somehow left a custom, something that will not be lost.”

Traditions come in all shapes. For the last 20 years, the Seger family has spent Christmas picnic-style under the Christmas tree.

“It has always been literally on the floor, on my great-grandmother’s quilt,” says Kari Seger. “That is kind of the key thing.”

But when Kari’s mother passed away two years ago, something new was added to the spread – crystal and silver, in honor of Kari’s mother, whom they called Mimi. Kari says Mimi was all about the fine dining supplies.

“She loved silver and crystal,” says Kari. “We use a lot of her china and crystal because it brings her there.”

So now the new family tradition involves raising a glass of champagne in crystal glasses and sharing Mimi moments.

“It had always been so much fun,” says Kari. “I think it is better to continue with our fun the way it was and honor her. Besides, Mimi would have loved us drinking out of her champagne glasses.”

Raising a toast of a different kind is Phyllis Rauls. She found stopping to pick up a six-pack before going to the cemetery made the sad trip a little easier.

“I found some beer and took a book and poured a little beer on her grave and even drank beer with her,” laughs Phyllis. “It became a ritual. Every time I went out there I would take beer!”

Phyllis says her mother didn’t drink alcohol, except for beer. “It was just a natural feeling to go out there and sit and talk to her and drink beer. I don’t know why, but it works. So now when I go out there, if I don’t take beer, I feel like, you know, she is just going to twirl.”

The ritual, she says, made the trip to the cemetery more casual. The tradition has lasted almost 20 years and is now shared by Phyllis’s father and sister.

Beer and crystal and orchids? So why do these things work? According to Marian Mankin, an expert with grief-support center Bo’s Place, it is all about the senses.

“All of our memories are formed with all our senses, our sense of smell, touch, scent, taste,” says Mankin. “So all of those things that stimulate those senses, whether it be the taste of that ice cream or the looking at mom’s dishes, setting the table with those things on that day, bring back not just the object but the memories associated with the object or taste or smell. So you have a sense of feeling that person’s presence.”

Whether it is fashion sense, shoes on the stairs or just a well-told story, what each of these people has in common is the bittersweet taste of loss. As each talked about the woman who shaped his or her life, there would be a catch in the voice at some point, but there was also a laugh – in fact, lots of laughs.

For them, the word “mother” is certainly filled with memories, but one would never say it has become hollow. It was easy to hear the warmth and love they had every time they spoke, whether they said “mother,” “mom,” “momma” or just “ma.”

Ideas for working through grief
• To avoid anxiety, acknowledge the day of loss by planning an activity.
• If you miss talking to your mother, write what you have to say in a journal, or write a card to leave graveside.
• Do something that was meaningful to your mother, and it can become meaningful to you.
• Cook her favorite recipe, or buy her favorite treat and enjoy it.
• Share memories with someone who knew your mother, like her friends.
• Do something in her memory. Volunteer or plant a tree.
• Talk about your mother.
• Realize you don’t have to have new memories to share old ones.
• Talk about your grief, whether with friends or in a support group.
Source: Marian Mankin, assistant program director of Bo’s Place, a Houston center offering free grief-support services. Call 713-942-8339, or see www.bosplace.org. 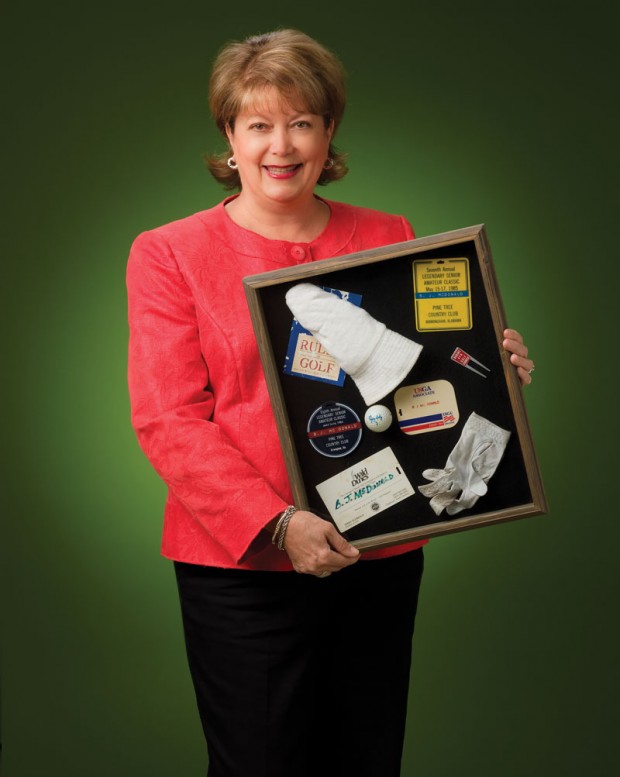 Blair Belin was given a shadow box by her husband Greg filled with her mother's golf mementos. (Photo: www.hartphoto.com) 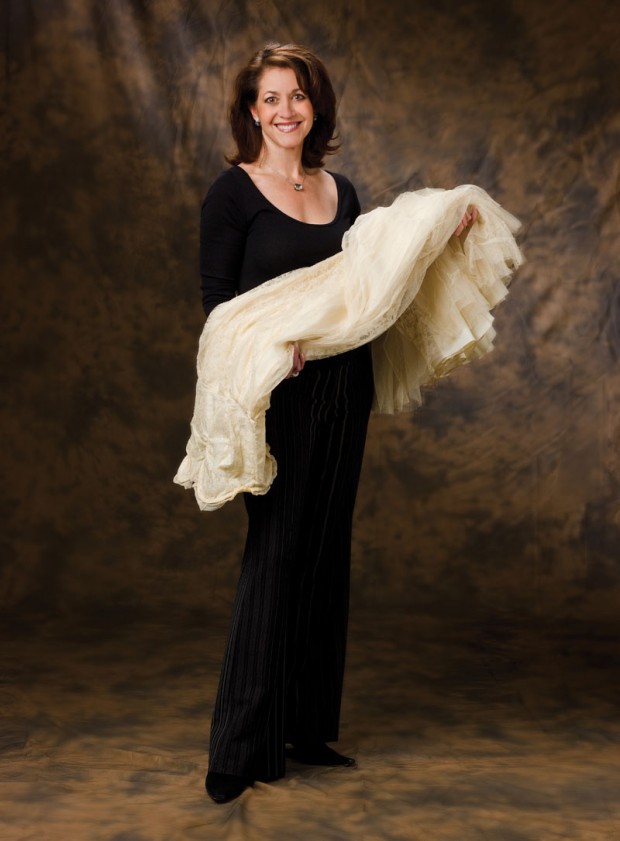 Dee Dee Dochen treasures her mom's wedding dress, which she recently discovered in a box in her brother's closet. (Photo: www.hartphoto.com) 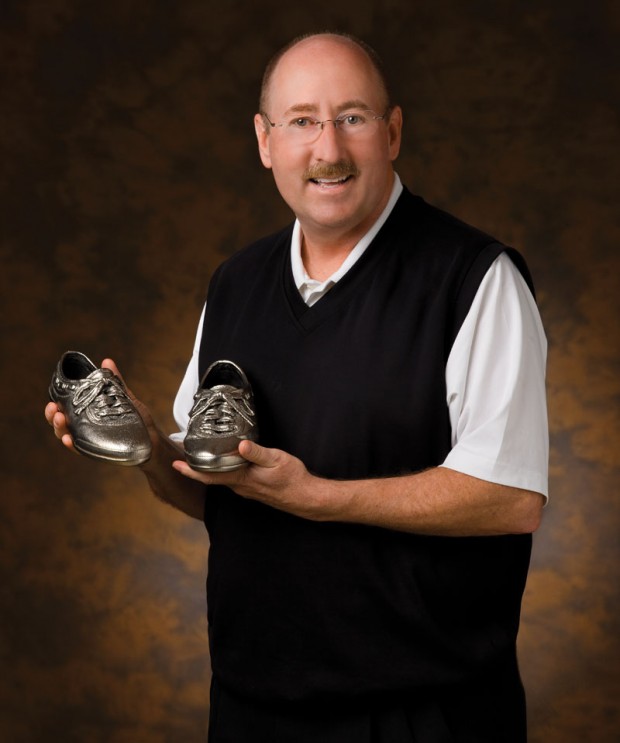 Mark Sass lost his mom but not her sense of humor. Her bronzed shoes are a constant reminder. (Photo: www.hartphoto.com)