Aspiring to be journalists 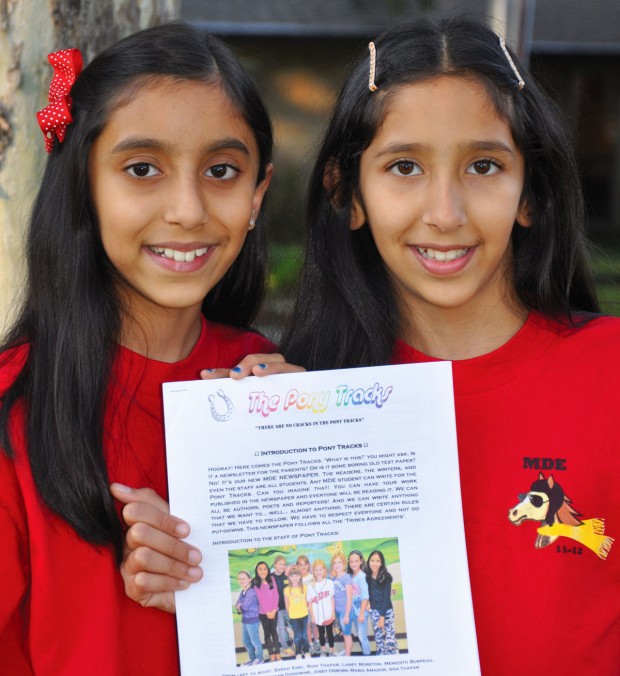 A few months ago we were browsing through our keepsakes from second grade. We came across a newspaper from our previous school in Greenwich, Connecticut. We both wondered why our current school, Memorial Drive Elementary, did not have a school newspaper. We decided to ask our mom if we could start a newspaper at MDE.

Our mom loved the idea, but she was a little hesitant because she knew that an adult would have to pitch in to supervise and was wondering how she could fit it in her busy schedule. We kept on pestering her to do it, and she finally agreed to talk to our principal, Mrs. Anick Watson. We both crossed our fingers and hoped that Mrs. Watson would like our idea. Soon we got the news that Mrs. Watson had approved the launch of a school newspaper.

Then we realized that we would not automatically be part of the newspaper team. We would have to write an essay explaining why we wanted to be a journalist/editor on the newspaper. We both worked hard on our essays because we really wanted to be selected. We were happy to know that we were among the nine students selected.

The first newspaper was launched this past May. The team named the newspaper Pony Tracks, signifying that we will leave tracks that last in the memory of people who read the newspaper, and the pony part came from the school logo. It was a very exciting day for the newspaper staff, and we celebrated with a picnic.

Since then, we have published another edition, and a third one is due this month. The newspaper staff is writing articles to inspire other students to raise money for charity and to volunteer. We already did a hugely successful bake sale to raise money. We hope that writing about our experiences will inspire others who read the newspaper to undertake charity projects. Pony Tracks continues to be an enriching and exciting journey for everyone involved.

Want to be a Buzz Kid? Email approximately 350 words, a high-resolution photo and caption to [email protected]. Or mail it to The Buzz Magazines, 5001 Bissonnet, Suite 100, Bellaire, TX 77401.