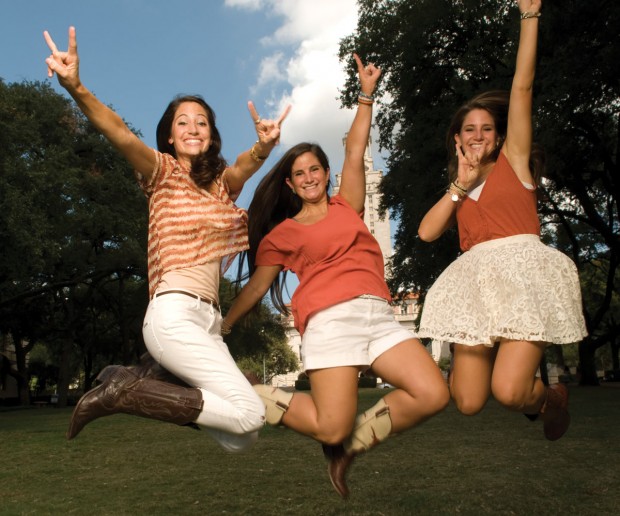 Rachel, Anna and Caroline Meyerson (from left) are all enrolled at the University of Texas, which thrills their hard-core UT parents. The girls enjoy a weekly sister lunch every Friday in Austin. (Photo: Mathew Sturtevant)

For some, college football brings up nostalgia. For others, it’s just a chance to tailgate with friends and family. And, of course, there’s the game itself.

Whatever the allure, these local alumni, with a combined 144 years worth of coveted season tickets, can’t wait to return to their alma maters every fall to experience football season.

Insurance broker Bryan Athon and his wife Lauren, an assistant vice president at a bank, both graduated from Texas Christian University and look forward to football season every year. “We anxiously await the schedule to come out. It’s always fun planning our fall. My wife and I even keep a spreadsheet on which games we want to attend,” Bryan said.

The season-ticket holders will attend five games this year, traveling as far as Kansas. One great memory they share is visiting the Las Vegas strip with thousands of purple-clad fans.

“TCU played the University of Nevada in Las Vegas on Halloween weekend one year. We went with a bunch of friends and stayed on the strip. It was a really good time,” said Bryan.

The couple is proud of their smaller school. “TCU is a pretty unique school. Our team has been discounted a little bit, so it’s fun to go out there and have a chip on your shoulder and prove to everyone you have a good team,” said Bryan.

This year, Bryan is looking forward to his idea of the perfect birthday. “My birthday falls on Thanksgiving this year, which is also the TCU vs. Texas game [at The University of Texas]. We’ll wake up, have Thanksgiving breakfast and then hit the road for Austin.”

About five weeks earlier, on Oct. 20, they will be in Fort Worth at the TCU-Texas Tech University game. 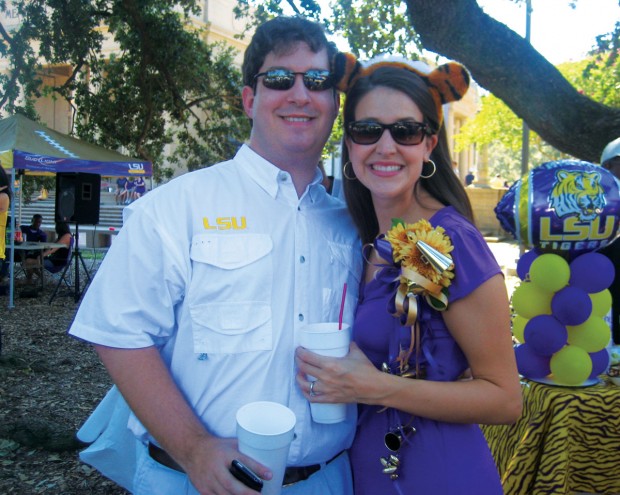 Ultimate fans Greg and Courtney Schilling were given a wedding shower at an LSU tailgating party in 2008.

Meanwhile, 170 miles away in College Station, Greg Schilling, a finance manager, and his wife Courtney, both graduates of Louisiana State University, will be cheering on LSU against Texas A&M.

“Both of my parents and sisters went to LSU,” Courtney said. “On my mom’s side, we just had our ninth LSU graduate. We really don’t know anyone in our family who hasn’t attended LSU.” Greg also comes from a long line of Tiger fans. “My family has had the same season tickets since 1953,” he said. “They were my grandfather’s, and now my parents have them.”

The couple even incorporated their love of LSU into their wedding festivities in 2008. They wed the same night as the LSU-University of South Carolina game. “We got engaged and only had four dates to choose from for the wedding, so we just decided to set up a big-screen TV so our guests could watch the game. The groom’s cake was even Tiger Stadium with little National Championship flags on it,” said Courtney.

The bride was honored pre-wedding with a shower hosted by her family and friends at an LSU tailgating party. “My mom’s friend wanted to throw a party for us, so she just decided to have it at her tailgate on game day. She had a caterer and a bartender, and my mom made this veil with tiger ears on it. We now pass on the veil to anyone in our group who gets engaged,” said Courtney.

Courtney and Greg experienced a rare opportunity to demonstrate their Tiger pride. “Greg and I were living in D.C. after we graduated, and we got to attend a dinner at the White House. The 2008 BCS National Championship winners were invited to attend, which happened to be LSU that year,” said Courtney. “The U.S. Marines played the LSU fight song. It was one of the coolest things I’ve ever experienced. I was very proud to be a Tiger that day.”

Along with their 1-year old daughter, Ellie, they travel to Baton Rouge every season to catch a game. “With LSU game days, it’s the tradition I love the most. It’s going to three or four tailgates and seeing old friends. It’s the camaraderie,” said Greg. 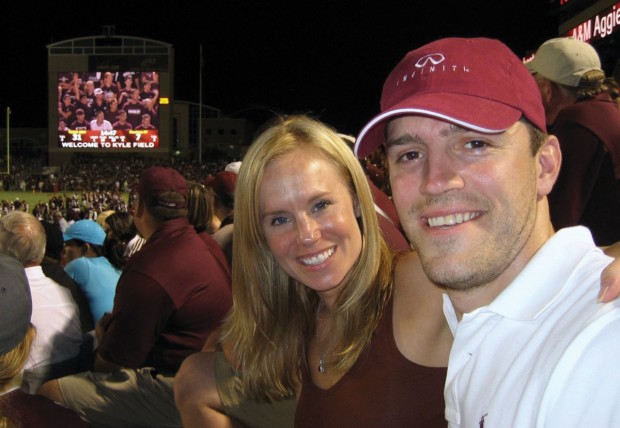 Shelby and Jason Stegent will cheer on the Aggies at Kyle Field in College Station against LSU this fall.

On the same night, across the field from the Shillings, Texas A&M alumnus Jason Stegent, a vice president of sales and marketing, his wife Shelby, a business development manager, and their 1-year old daughter Caroline, will be rooting for the Aggies.

The Stegent family has deep A&M football roots. “My dad, Larry Stegent, was class of 1970 at A&M and a three-time All-Southwest Conference running back. The St. Louis Cardinals selected him with the eighth pick of the first round in 1970,” said Jason. “I went to my first A&M football game when I was a few years old. We were Aggies out of the womb.”

The Stegents have had the same season tickets for 25 years. “We have sat around the same people since I was a little kid. Now I am in my 30s. They have watched me grow up, so I always get excited about going to the first game of the year, shaking their hand, catching up with them, experiencing Kyle Field with them,” said Jason.

“I am not familiar with another school that has a fan base as passionate as ours is,” said Jason. “Even when A&M is not doing well, you would never know it looking at the fans. We are just as crazy about our football team whether they are winning 10 games or 6 or 7. Aggies are supportive of their team no matter what. That’s what it’s all about,” he said.

A&M changed conferences this year, ending the longtime rivalry against The University of Texas. “Thanksgiving day will not be the same this year without the Aggies and Longhorns playing each other. Anyone who appreciates the rivalry hates to see the game end,” said Jason. 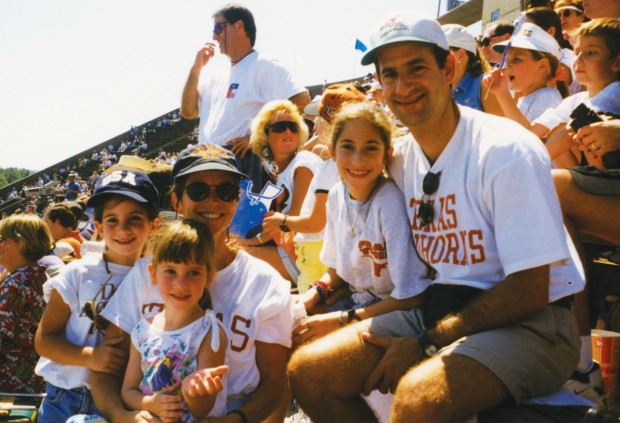 Anna, Caroline, Pauline, Rachel and Alfie Meyerson (from left), pictured in 1997 at a UT game, have traveled together as a family to Longhorn football games for 25 years.

Attorney Alfie Meyerson and his wife, Pauline, are certainly familiar with that rivalry. The couple, both graduates of UT, has three daughters currently enrolled there. “When our third daughter, Caroline, got into UT, Alfie and I looked at each other and said, ‘We have just won the Longhorn trifecta!’” said Pauline, laughing.

UT football games are a family affair. “We got season tickets as a young married couple, and as each child was born, we just continued going to the games. It never stopped us,” said Pauline.

For 25 years, the family has not missed a single Texas-OU game.

“It’s my greatest accomplishment in life. I count in-womb. It helps my numbers,” said Rachel, 24, a UT PhD student studying the psychology of social networks.

“Our friends always thought we were nuts for going every year. It wasn’t just something we did one year, and then gave up. It’s part of who we are,” said Caroline, 18, a freshman majoring in Plan II and business honors. “Our lullaby when we were little was The Eyes of Texas. That was the first song I ever knew.”

“I recognized former UT coach Darrell Royal outside the stadium one year. I got to take pictures with him. He was so nice. I think it was my dad’s proudest moment,” said Anna, 21, a senior majoring in elementary education.

“I do love winning games,” said Rachel. “But regardless, my family always stays until we sing The Eyes of Texas at the end. I think that shows real pride for the university, regardless of whether we win or lose.”

Two other local families don’t have to travel far to see their favorite college team, the University of Houston Cougars.

Rick Burns, an oil and gas insurance broker and UH graduate, and his wife, Kay, purchased a 1978 Ford F-150 and are having it transformed into a perfect tailgating truck. “The guy who is converting it does hunting vehicles. My son and husband designed this one for tailgating,” said Kay. “When it’s finished, it will have a grill, a keg, running water, a TV with a portable satellite, coolers for food and drinks, a rack where you can slide chairs into, and then once the game starts, you can lock it up so all your stuff will be secure.” 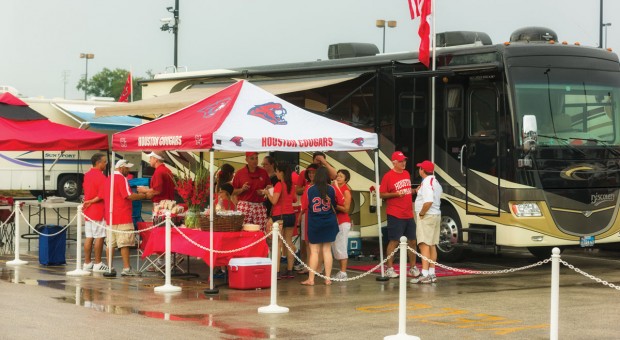 Attorney and UH alumnus Dean Pappas, and his wife, Kathy, have been UH season-ticket holders for 21 years and recently purchased a 40-foot RV to host their tailgates. “We usually have about 100 people at each tailgate for each home game,” said Kathy.

“My favorite thing about UH football is that it really does bring the community together. You’re celebrating something that makes Houston proud. It’s a sense of community, education and family. It epitomizes everything a parent tries to teach their kids,” said Kathy.

Even their four kids, Dena, 17, George, 16, Maria, 14, (all students at Memorial High School) and Victoria, 11, a student at Spring Branch Middle School, share a love for UH football-game days.