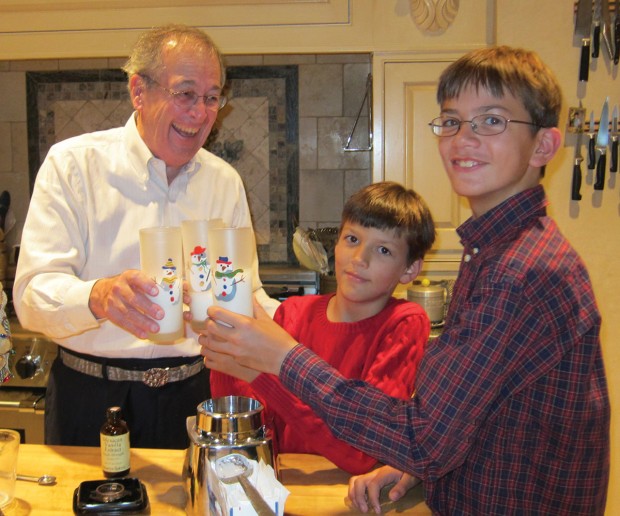 Julius Glickman and his grandsons Carter Glickman, 10, (at left) and Austin Glickman, 11, make “snowmen” each Christmas morning (there’s also a grown-up version for the adults).

Nothing says “cheer” better than a holiday cocktail. And in the South, no cocktail says “holiday” better than milk punch.

Rooted in Colonial times, milk punch is a storied classic, especially at Christmastime. It was originally concocted for medicinal purposes, possibly the impetus for its reputation in New Orleans as a day-after elixir, like a holiday Bloody Mary. Ben Franklin even had his own recipe.

A taste for milk punch spread across the Deep South via Mississippi riverboats until it settled in New Orleans, the settling spot – if not the originator – of so many of our favorite cocktails. There are countless variations. Some call for brandy, some for bourbon, and some for a funky mix.

Mom of four Jackie McGreevy went on a hunt for the perfect milk punch recipe. “For a few years, I’ve hosted our block’s Christmas party,” she says. “Last year, we were taking the kids caroling, and I was determined to make milk punch for the grown-ups.”

After scouring the Internet and sifting through recipes “from Brennan’s to Paula Deen,” Jackie found some to be like shakes, “too heavy,” some too sweet, and some “that were going to put hair on my guests’ chests.” Eventually she came up with a recipe that made everyone happy. Okay, very happy.

“Being my mother’s daughter, I knew I could make my own,” Jackie says. “And I had a lot of fun doing it.”

Jackie’s is but one version of this indulgent, festive – and dangerously down-able – drink. (See below for all recipes.)

Laura Beavers’ milk punch is heavy on the punch. Hers doesn’t hold back, incorporating bourbon, cognac and rum, with a few other ingredients thrown in for good measure.

Unlike Jackie’s pieced-together version, Laura’s recipe is a family tradition that was handed down from her grandfather Tommy Thomson to her mother Martha Thorsell, and then to Laura.

“They used to make it for morning parties,” Laura says, “but now we only do it on Christmas because it’s so strong!”

But come Christmas, the Thorsells and Beavers will be drinking Tommy’s Milk Punch, however dangerous.

On the lighter side (if there is such a thing), Michelle Glickman, a legal nurse consultant and mom of two boys, offers her husband’s family’s recipe for “snowmen.” More akin to a shake, this one takes a whirr in a blender. The “light” part comes from her in-laws, Suzan and her attorney husband Julius Glickman, concocting the drink as a kids’ version of milk punch. And then, of course, altering it.

“We made snowmen every Christmas morning with the help of the children and later the grandchildren,” Julius says. “The rest of the family always had milk punch, and we wanted the children to have their own drink.”

Thanks to the snowmen invention, Christmas morning is white at the Glickmans’: “We always manage to get powdered sugar all over the kitchen.”

Would that be before or after the brandy addition?

Take Jackie’s lead and have a taste test of your own. Jackie’s, Laura’s and Michelle’s recipes follow. Try them all (why not?), and let us know which one is your favorite.

In a pitcher, whisk together the milk, Half and Half, agave nectar (or sugar), vanilla and bourbon. Cover and freeze until slushy, approximately 3 to 4 hours. Stir before serving over ice. Top with fresh nutmeg gratings. Serves about 10.

Stir all ingredients together, chill and sprinkle with ground nutmeg. Serves about 30. Freezes well.

Pour brandy, milk, sugar, vanilla and ice into a blender. Whirl until the mixture is frothy and well blended. Pour into glasses and sprinkle with nutmeg. Makes four.

Shake on ice and strain into a rocks tumbler filled with crushed ice. Makes one cocktail.

Moisten rim of glass; then press rim into crushed peppermint-candy pieces. Shake all other ingredients on ice and strain into glass. If you wish, garnish with a small candy cane. Makes one cocktail.

Combine vodka, Champagne and juice in a large, stemmed, red-wine glass. Add ice and stir until cold. Twist orange strips over the glass, drop in and serve. Makes one cocktail.