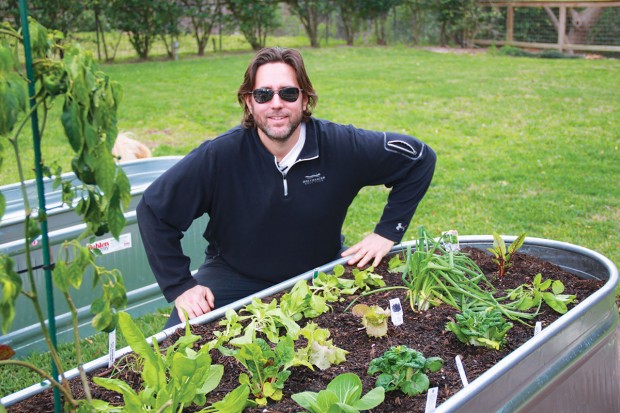 Adam Weinstein and his family eat a plant-heavy diet, some of which they grow in their back yard.

And, of course, get healthy.

Coming off the debauchery that started months ago with Halloween candy and continued through cocktail parties, cookie exchanges and New Year’s Day tamales, a detox is usually a pretty welcome idea. So where to start? Read on for some neighbors’ best tips for you and your family to put to the test, and kick off the new year with some muscle.

Gabrielle Welch, author of The Pizza Trap
Gaby’s a champion for healthy kids and families. Her advice: “Upgrade the quality of your kids’ lives and yours by upgrading the quality of your food. Start adding higher-quality versions of what you’re already eating – hormone- and antibiotic-free meat, kale mixed into salads for extra nutrients, brown rice instead of white. These little things add up and make a world of difference in your appearance and energy level.”

Another tip: “Start eating and cooking at home more as a family. Adolescents who eat at home four or more nights a week have better grades and fewer problems with drugs and alcohol.”

Nicole Eidman, stay-at-home mom
Nicole’s top picks for staying healthy in the new year: “Eating out less and staying away from alcohol and caffeine, getting good rest at night, taking probiotics, and exercising four times a week.” Probiotics are good-bacterial supplements that, taken daily, may ward off infection, promote gastrointestinal health and boost immune systems. Nicole buys hers in the refrigerated supplements section at Whole Foods.

And her exercise regime includes walking Memorial Park in Weight Pants from The Garage Workout gym. “The pants have built-in weights, so they trick your body into thinking you’re 12 pounds heavier than you are, so you automatically work harder.”

Benjamin Brochstein, doctoral candidate at Rice University and yoga instructor
“We lose flexibility as we age,” Benjamin says. “Yoga can reverse that.” Benjamin started practicing yoga as a means to a better meditation practice, crediting it with giving him the ability to sit cross-legged on the floor for 20 minutes a day, and as a bonus he’s stronger and more fit.

“Don’t be afraid of starting,” he says. “Give yourself some time, try out different studios and teachers until you find one you like. Don’t try one class and decide yoga’s not for you.” For folks new to yoga, Benjamin advises going to the Texas Yoga Conference at the George R. Brown Convention Center March 1-3 to check out different studios and teachers. 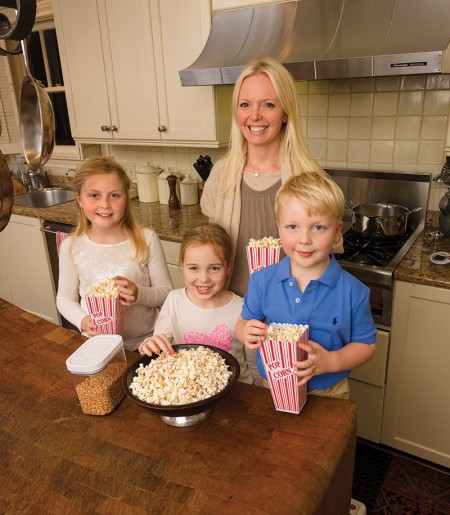 Laurence Bragg, stay-at-home mom
“My mom has always modeled a healthy lifestyle for us,” Laurence says. “She looks great and is healthy, so I do whatever she tells me!” One of those tips was tuning in to the natural-health website mercola.com, maintained by alternative physician Dr. Joseph Mercola. “There are a ton of ‘natural health’ websites out there. His is a bit quirky, but it’s the most comprehensive. I rely on it like a search engine for natural health information.”

Some of Laurence’s favorite small changes: “Replace table salt with Himalayan pink salt, which is actually good for you; look up the ‘dirty dozen’ produce list and go organic – unless you like the idea of consuming a chemical cocktail – and look at the ‘clean fifteen,’ which you don’t need to buy organically; trade in vegetable or canola oil for coconut oil – it’s tasty in baked goods and has surprising benefits; ditch the microwave and microwave popcorn.”

Adam Weinstein, internist
“I was in a constant food battle with my kids and my patients,” Adam says. “So I decided to become a role model.” That was two and a half years ago. Today, Adam and his family eat a plant-based diet. “My wife and I say we’re vegan-ish. We eat meat, but we make it count.” They raise chickens in their backyard and grow their own veggies.

Adam lost 120 pounds “by walking the walk,” and the patients who follow his lead have reversed chronic diseases like diabetes, heart issues and gout. “For patients who can, it’s empowering to choose food over medicine,” Adam says. “And now my kids choose well, too.”

Henry Richardson, owner of exercise studio DEFINE body & mind
“New Year’s resolutions are often overly grand or generalized, so they go unfulfilled,” Henry says. He suggests a few changes now, “so you don’t have to make health and exercise a resolution next year. 1. Find something you love. Walk with a friend, try a dance class – the key is enjoying it. Little by little it becomes a part of your daily life. 2. Add foods instead of taking them away. Try adding something healthy to a meal that’s not necessarily the best for you. 3. Enjoy food! Eat more vegetables, whole grains and seasonal foods. Take a class to learn how to prepare it in a delicious way. 4. Take a deep breath. Take a four-count inhale, hold for seven counts, exhale for eight counts. Do it three times, and right away you’ll feel better.”

Elizabeth Irvine, author of Healthy Mother Healthy Child: Creating Whole Families from the Inside Out
Elizabeth teaches that to have healthy families, you’ve got to have healthy parents. “As mothers, we feel guilty about practicing self-care,” Elizabeth says. “But when we nurture our bodies, minds and souls, the benefits ripple out to the whole family.” That nurturing, she says, can be as simple as having a shower, some exercise and a little quiet time to focus and “set your intention” for the day. She suggests taking time in a morning shower to still the mind and focus on breathing for a few minutes.

Meredith Maierson, stay-at-home mom
“For me, keeping my kids healthy is all about lunches and snacks,” Meredith says. “It’s my way of making sure they make good choices when I’m not there.” Meredith says it starts at the grocery store – which she hates but tolerates – at the beginning of the week. She reads labels and stocks up on lower-fat, lower-sodium alternatives to chips and cookies. The lunch-packing is a family tradition: Meredith’s mom still sends her dad to his doctor’s office every day with a brown-bag lunch. “For a while I tried sending lunch with my husband, but then it just seemed too dorky. Now it’s just the kids.”

Kristin Dawson, stay-at-home mom
“Read Younger Next Year: Live Strong, Fit, and Sexy – Until You’re 80 and Beyond,” Kristin says. Internist Dr. Henry S. Lodge wrote the book with his 73-year-old superstar patient Chris Crowley to show people how to combat the signs of aging and feel younger while aging in years. “It struck me that by exercising six days a week, we can actually turn back the clock. Exercise now for a better life later.” The New York Times calls the book “one long, exuberant New Year’s resolution.”

Russell Radoff, internist
A few years ago, a weight-loss, shape-up challenge from his brother coupled with tight-feeling clothes sent Russell into transformation mode. He lost 40 pounds, got fit and gained energy. “There’s no big secret. Just daily cardio [the elliptical machine or running three to five miles outside] and Weight Watchers online,” Russell says. “The calorie restriction is the most important part of weight control for me, and the exercise just turbo-boosted it.”

Sandy Strum, stay-at-home mom
“Green drinks!” Sandy says. “They’re filling, they give you energy, and they make your skin look good. They take a little time, but they’re worth it.” Sandy has a few favorite combinations that she blends in a Vitamix, but any blender will do. Almond milk, banana, frozen pineapple and baby spinach. Kale, avocado, cucumber, apple and cinnamon. Or kale, cucumber, lime and apple or pear. “I don’t have measurements – just throw it all in.”

Megan Schwartz, pediatric nutritional counselor and owner, Kids Nutrition Houston
“Most of us know what to eat, but making those choices isn’t easy,” Megan says. She advises starting with barely noticeable small changes. “Remember that the first two bites taste the best,” she says.  “If you’re craving chocolate cake, take two bites and stop.” She says setbacks are inevitable. “But wake up the next day, recognize why you made the choice you did and think about how you’ll make a different choice to be successful in the future.”

Heat the oil in a 3-quart saucepan on medium high heat. Put 3 or 4 popcorn kernels into the oil and cover the pan. When the kernels pop, add the rest of the popcorn kernels in an even layer. Cover, remove from heat and count 30 seconds. (Count out loud; it’s fun to do with kids.) This method first heats the oil to the right temperature; then waiting 30 seconds brings all of the other kernels to a near-popping temperature so all pop at about the same time.

Return the pan to the heat. The popcorn should begin popping soon, and all at once. Once the popping starts in earnest, gently shake the pan by moving it back and forth on the burner. Try to keep the lid slightly ajar to let the steam escape (the popcorn will be drier and crisper). Once the popping slows to several seconds between pops, remove the pan from the heat, remove the lid and dump the popcorn into a wide bowl. Add butter and salt to taste.