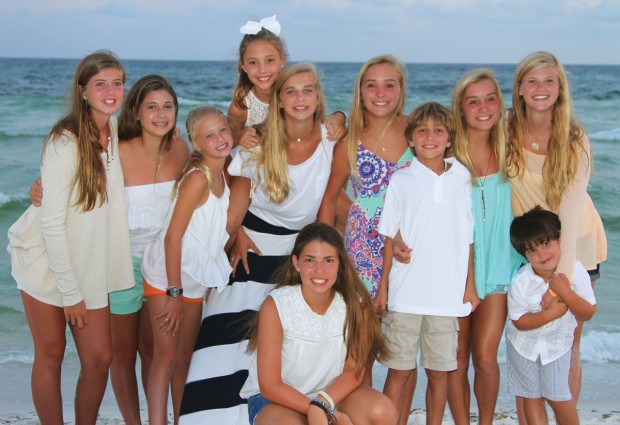 By now, many of you have already made your Spring Break reservations and are counting the days – but if not, you’re lucky. Houstonians are well placed to make a decision at the last minute.

Some head east along 1-10 to Seaside, Florida, where legions of Houstonians are known to congregate during Spring Break and all summer long; others stay closer to home. Whether your Spring Break is a staycation, a quick getaway or the adventure of a lifetime, the important thing is to do it.

Terrie and Rob James discovered Seaside, an idyllic community along Florida’s famed 30A near Destin, in 2011. Their longtime friends and Memorial neighbors Anna and Tim Jones had been going for several years, and had fallen in love with the place.

It was easy to see why. Many Houston families travel together to Seaside and its surrounding neighborhood of Watercolor, renting homes just down the road from each other. For the Jameses and Joneses, when they aren’t enjoying Seaside’s sugar-white sand beaches and emerald water, they’re biking down picture-perfect lanes and trails; stand-up paddleboarding with friends; ordering a Frost Bite snow cone or a grilled cheese sandwich from the vintage Airstream trailers that line 30A in the center of Seaside; or playing flashlight tag at sundown.

On one trip the Jameses’ three daughters – Carolyn, Emily and Sarah Kate – took off with friends their first day in Seaside. “We suddenly had the afternoon to ourselves, so we were able to sit, have a cocktail, and enjoy the view from Bud and Alley’s.”

“It’s a little community,” explained her friend Anna, who’s been going to Seaside for seven years. “Kids are free to be kids; they’ll go get their snow cones and run around with their friends and go to the beach and go surfing…. For us it’s just a fun, active family vacation. There’s something for everyone there.”

Other Houston families have found other ways to experience the magic of shared Spring Break with friends and family. Usually the Shahs go skiing in Tahoe, and the Yalamanchilis have gone on a Disney Caribbean cruise and skiing in Vail on recent Spring Breaks. But a couple of years ago, Nina Shah was looking to save money and was shocked by the airline ticket prices to just about anywhere – at a minimum of $300 apiece, for a family of five it was a stretch. And Sushma Yalamanchili, whose husband Haresh couldn’t get away last year for Spring Break, decided at the last minute to team up with her friends Julie Weatherly and Yvette Gotthelf and find a closer destination.

The Shahs coordinated with other friends in Bellaire, the Allens and the Garcias, who have children around the same age, and caravanned together to Great Wolf Lodge in Grapevine, Texas. They chose the place for its giant indoor waterpark – ideal for a pack of little ones. At the time, her son and daughter, Vir and Uma, were 5 and 6.

The kids were enthralled with Great Wolf Lodge – which looks like an ordinary hotel on the outside but behind the ordinary façade there’s an imaginary forest, vast waterpark and roaming characters. But what captivated them the most was Magic Quest. Modeled after the Harry Potter books, the game involved following clues to find magic wands hidden all over the resort.

“The kids would wake up in the morning and say, “Oh, can I go with Augustine and do a quest? And they can’t really get lost; it’s a nice contained way for them to roam around.” Meanwhile, the moms could relax, go to the gym or just hang out. Later, as the children swam or watched the dive-in movie, they could sit at the bar overlooking the pool and enjoy a drink together. 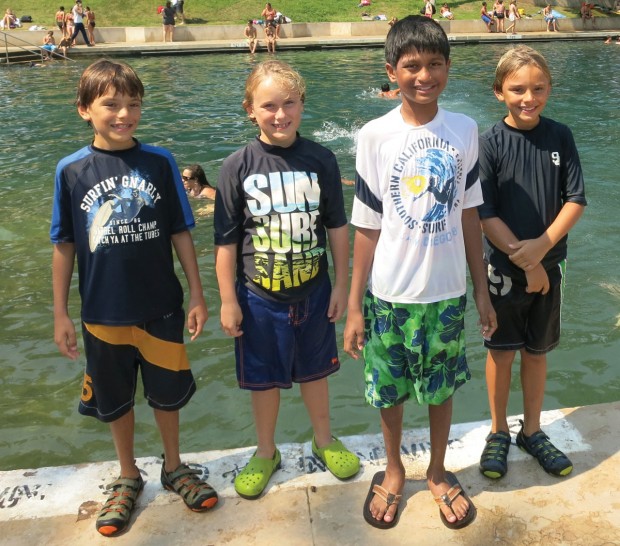 Sushma’s group chose Lakeway Resort in Austin at the suggestion of some of her Austin friends, one of whom had gotten married there. Her boys, Ravi and Rohan, are 8 and 9; Julie has two boys the same age, and Yvette has an 8 year old. At Lakeway they went fishing and enjoyed an indoor pool with “dive-in” movies; on a day trip into Austin, they explored Barton Springs.

“We have had some trips that by the time we returned home, we needed a vacation from the vacation,” Sushma said. “For this trip, we just packed up the car and left for a few days, and it was a spontaneous, last-minute decision.”

Sushma says her husband is sorry he missed it last year – and he doesn’t plan to again.

“I think it’s really important for the family to spend quality time together over Spring Break—wherever you choose to spend it,” Sushma said. “I think it makes the family a closer unit and creates lasting memories for all of us.”

For families with kids at home, long gone are the days of lounging on the beach with an umbrella drink. But that’s not to say that Spring Break is a thing of the past – or that it has to be all about the kids.

For the spontaneous among you, we’ve put our heads together and come up with a few suggestions.

Quick Trips
Some years it’s enough to just pack the kids in the car and do day trips or head to the closest available resort. If that’s you:

Galveston: Moody Gardens has a couple of new items for Spring Break: National Geographic Real Pirates exhibit, and a new ropes course and zipline. Adventurers, take a stand-up paddle board excursion with Ohana Surf & Skate (lessons available). Gamers, drop by Board Game Island, a new café at 213 23rd St. Foodies, head down the street to the new kitchen boutique, Kitchen Chick, 528 23rd St. For sea and sand, head for Stewart Beach (named one of the best family-friendly beaches in America by Family Vacation Critic last year) over East Beach, which is known as the “party” beach in Galveston and is the only public beach park where alcohol is permitted.

Houston area: Blessington Farms in Simonton gives kids a taste of the farm life. Pick your own strawberries, then set the kids loose to explore the giant hill slides, barrel-train rides, a giant sand mountain, hay rides, pedal cars, chickens to hold, a hay maze and more. From March 8 to 11, the Compassion International Change the Story Tour will set up its 3,500-square-foot interactive Mobile Experience here, giving families a chance to travel virtually to other countries and see the lives of real families.

Amarillo and Palo Duro Canyon State Park: Experience this geological marvel by camping, hiking, horseback riding, wildlife viewing and, new this year, zip lining at Palo Duro Adventure Park, located just outside the state park entrance. There’s plenty to see in Amarillo, too; cowboys still ride the range, you can still find a chuck wagon meal, and thanks to the American Quarter Horse Hall of Fame and Museum, the town is also home to more than 100 quarter horse sculptures that dot the city, each of them painted in a different and often imaginative way.

Moab (18-hour drive from Houston): Take the Mill Canyon Dinosaur Trail, see remnants of an old copper mill and Indian rock art, and take the kids rappelling and learn climbing techniques with one of Moab’s trained tour companies. Arches National Park is a breathtaking sight, as is the nearby Canyonlands National Park, and both have several short trails great for children. Consider renting a campground cabin for the family spring break.

Florida Beachcombers
Destin: On Florida’s Gulf Coast, Destin has become a hub for Houstonians. Like Seaside, it’s a day’s drive east down I-10, and the waters are emerald green and inviting.

For those who want a little more action than bucolic Seaside, Destin Harbor is where it’s at. You can walk along the docks to see the charter fishing boats coming in with their catch (or charter an excursion yourself). Take a dolphin cruise, go parasailing or jet skiing. For school-age kids, there is Gulfarium Marine Adventure Park as well as Big Kahunas Waterpark.

Note: Last season, Destin started having an influx of Spring Breakers, who became unruly and littered the beach. “The Sheriff’s office came out in full force, and we’re hoping word spreads fast this is NOT for the Spring Break party crowd,” said Tracy Louthain, Destin spokesperson. “Up until last year, it was all families.”