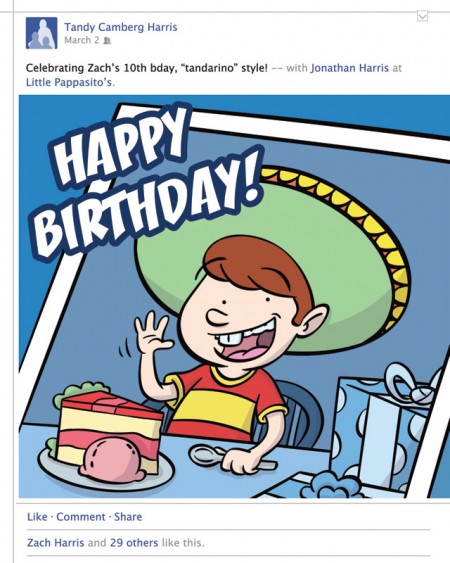 Tandy Harris is famous for putting extra thought into her Happy Birthday posts on Facebook. Here is a caricature of a recent post celebrating her son’s birthday.

There was a time when wishing someone happy birthday took forethought. Remembering the day, picking out a card, mailing it, making a call. Enter Facebook and its daily reminders of a gazillion of your friends’ and friends-of-friends’ birthdays, and into the ether of the Internet goes the love.

Or that’s what I thought when Happy Birthdays started coming via Facebook. It seemed so impersonal – all you do is type in “Happy Birthday,” and you’re done, off the hook. It’s the thought that counts. But wait a minute, what about a “How are you?” or “How are you celebrating?” In our fast-moving, information-overloaded, busy-is-the-new-normal lives, is it too much to ask? And in fairness, Facebook does generate way more Happy Birthdays than we’d ever get calls or cards, messages from blast-from-the-past friends who wouldn’t have remembered – or known – the date without a social network reminder. But still. Was I alone, a dinosaur among well-wishers?

Not according to 21-year-old Andy Powers, a senior at Texas Tech. “I have about 900 Facebook friends,” Andy says. “I know probably 80 percent of them, and maybe 100 of those write on my wall for my birthday. But I never do that. If they’re my friend, I make it more personal. I’ll call them or go out with them. I don’t see the point of just writing on their walls.”

In a generational irony, Andy’s mom, Chris Powers, is the one who likes Facebook Happy Birthdays. “It’s kind of nice, because I hear from old high school classmates I’d never hear from otherwise. But to be perfectly honest, we fell out of touch all those years ago, and I probably wouldn’t miss [the birthday wishes] if they were gone.”

A week before his birthday this year, one lawyer who asked not to be named went so far as to remove himself from Facebook, just “as an experiment. The people who really care will call or text,” he says.

“Just because you’re friends with 680 people, and Facebook tells you it’s someone’s birthday, doesn’t mean you’re a real friend. What about having to actually put the birthday on your calendar?”

There are some Facebookers who have manipulated the system, imbuing the impersonal realm of technology with a personal vibe.

Allison Zeller is known for posting messages that not only wish the person well, but also give them something to think about, naming famous people who share their special day. “When friends started having babies, I would clip the part from the newspaper that told the famous birthdays for that day,” Allison says. “Then I’d send it to them so that they could keep it in their baby’s book.

“When Facebook came along, I’d look in the paper or go online to see the famous birthdays, then use them in the post … a little something extra to show people I really did think about them. I’ll pick someone famous and then someone random, like Mr. T.” Allison shares her birthday with Boy George, Donald Trump and Yasmine Bleeth.

“Nobody calls anymore, and Facebook posts are lovely, but just ‘Happy Birthday’ is boring,” says Tandy Harris. “I want to make someone’s day happy.” So she makes personal electronic collages with photos, messages and decorations. She pulls photos off friends’ Facebook sites and uses phone apps to manipulate them. “At first it took a long time, but now it takes about five minutes to really make a statement,” Tandy says. “The apps are so easy, anyone can do it.”

Tandy uses her iPhone and recommends the apps A Beautiful Mess (99 cents), Pic Collage (free) and Photo Grid (free). “I save photos and combine apps, because not all of them do exactly what I want.”

Buzz associate editor Cheryl Laird’s high school buddy, Robin Jones, loves old movies and sends a personally chosen clip along with his Facebook birthday greetings. “He sent me a sword-fighting scene from Scaramouche because I fence,” she says. “I loved it.”

A few years ago, public relations exec Susan Farb Morris started posting musical videos to celebrate friends’ birthdays. “I started with the great Beatles clip ‘Birthday,’ and felt like I set a precedent. Now I have people tell me they look forward to my birthday posts.”

Susan picks a different clip every year. This year, she’s upped her ante, commissioning a musical birthday message from former participants in the University of Houston Texas Music Festival. And she’s sharing – the video should be available for use next month via the Festival’s Facebook page.

“I try hard to do something that brings a smile to someone’s face,” Susan says. “That’s what social media is all about.”