On the Mayor’s Youth Council 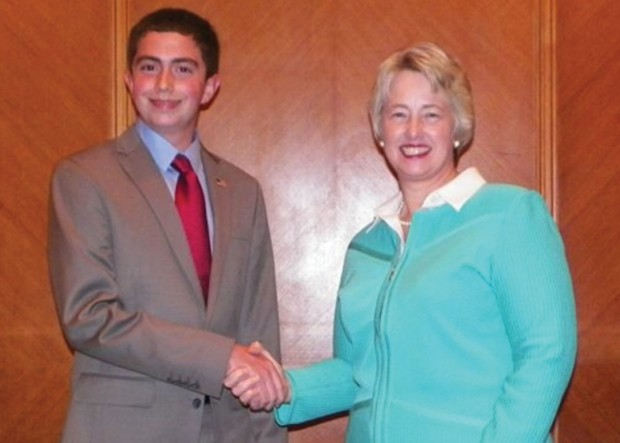 Jack Oldham, a sophomore at School of the Woods’ Woods High School, was one of 28 teens out of more than 400 applicants chosen to be on Mayor Annise Parker’s Mayor’s Youth Council.

On October 29, 2013, I was excited to join the Mayor’s Youth Council here in Houston. On that day, I was sworn in to my position on the council by Mayor Annise Parker.

I began the whole process in August. After completing a strenuous application and meeting with the chief service officer of the Volunteer Initiatives Program, I was accepted in mid-October. It was all worth it to have such a great opportunity. I am able to learn about my community’s governing system and work with organizations that help people in the area. Joining the council was both a new experience as well as something that I have become accustomed to over time.

My school, School of the Woods, has prepared me through years of education in a social environment to enter a group that both represents Houston’s youth and gives back to the community. I have learned how to work in a group and cooperate with others through programs like Montessori Model United Nations and Service Learning at school. Being on the Mayor’s Youth Council allows me to stand for the young people in Houston and voice their opinions and my own in an open environment that actually has an impact over the things that happen within the City of Houston. I think that the city would really benefit from more of the youth voicing their opinions publicly. The local government officials the council and I have met over the past months have all been very open to hearing our opinions and seem to enjoy listening to them. My goal is to fully represent the youth of Houston.

Since joining the council, I have already met the mayor, two City Council members, the president of the Houston Texans, and several other important people in the area. I have also participated in programs like the Souper Bowl of Caring. Young people have voices that should be heard by everyone, including their peers. Empowering the youth of today is building a better tomorrow.

Want to be a Buzz Kid? Send us approximately 350 words, a high-resolution photo and caption on our Submit Your Story page. Or mail it to The Buzz Magazines, 5001 Bissonnet, Suite 100, Bellaire, TX 77401.