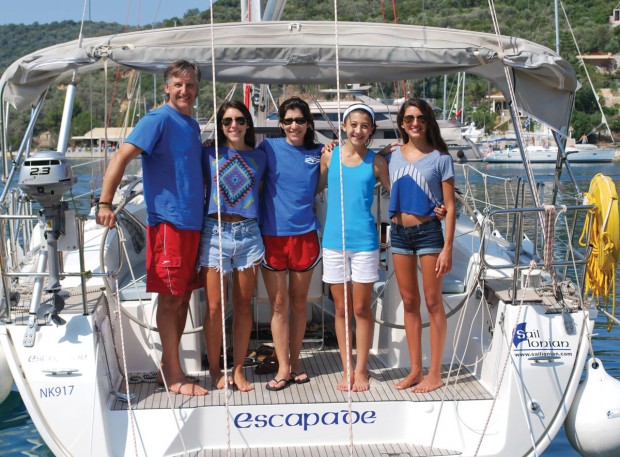 Everybody has a bucket list, and Gus Pappas is no exception. At the top of his was sailing in the Ionian Isles of his native Greece – but he didn’t know how to sail. And given his busy life as an attorney and soon-to-be Bellaire city councilman, it didn’t look likely that he was going to learn anytime soon.

Enter Janus and John Lazaris. They escaped with Gus and Pamela Pappas and their families a couple of summers ago to the island of Santorini. “One evening,” says Gus, “we were sitting on the caldera in one of the island towns, looking west watching the sunset, and I remarked, ‘Here I am, Greek – one of the largest sailing fleets in the world flew under the Greek flag – and I don’t even know how to sail. I need to learn how to sail.’”

“We can change that,” responded Janus. “Let’s say in two years we have a sailing trip here in Greece.”

“I laughed and said, ‘God, that’s a wonderful idea,’” Gus recalls. “But is it really going to happen?”

Janus, an interior designer with her own company, knows how to get things done. A few weeks later the two families got together with Jennifer and Dimitri Georgantas, another local Greek family, and the idea came up again. After a little wine, the three families were on board. Janus gave the adventure a name – “Three Sheets To The Wind” – and had T-shirts made.

That’s when Janus got to work in earnest, researching costs and options, looking for other families, calling to encourage other folks to take sailing classes.

The next summer during their annual trip to Greece, Janus and John found a charter company and mapped out a tour. The Ionian Islands are some of the safest waters, with protected coves and beautiful beaches. The trip was coming together, and so, as Gus recalls with a laugh, “She prompted us to get going.”

“They called me the cruise director,” she joked. “Behind my back, I’m sure they called me a few other things.”

Janus and Gus signed up for sailing classes in Kemah, and several others followed suit. The group started as 15 families; at the end there were seven families on six boats, for a total of 29 people. All but one were from Houston, and all but one family captained their own craft. The 30th sailor was Pavel, a skipper provided by the charter company. Pavel served as commodore.

Greece is home to dozens of charter companies easy to find on the Internet. Many are British-owned. The charter company helped prepare the itinerary, made reservations at ports, and spent an hour with each of them going over the details of their particular boat.

“If you have a large group, they will customize your sail a bit more,” she said, “but if you are on your own, you can join a group of yachts in a flotilla – or you could book a skipper to handle your sailboat and relax.” 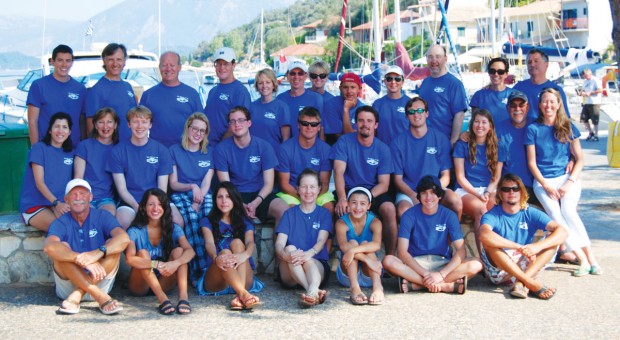 For the Pappas family, it was a leap of faith; they knew only the Lazaris and Georgantas families. Many of the kids attended Bellaire High School; the Pappas girls and Niko Lazaris went to Bellaire, as well as the Powers and the Techmanskis. One of the Pappas girls, Lexi, knew a boy from one of the families, Ross Techmanski. They had a good laugh when talking about their summer-vacation plans and realizing they were going on the same trip.

The setup was perfect for the teens and college kids. “It’s amazing how well they got along,” commented Janus. “There wasn’t one kid who was left out of the circle.”

“Even though you’ve never met,” said Pamela, “you realize you have a whole lot more in common than you realized. We all got along famously.”

The Pappas sailed a 40-foot boat named the Escapade. All three daughters – Elena, Demi and Lexi – were aboard. Janus and John Lazaris and their son Niko sailed another 40-footer called Shortbread. Probably the most exciting boat was the 46-foot Tranquilizer, sailed by the Powers family, because there were eight people aboard: brothers Joe and Russell Powers and their respective wives, Chris and Kim, and children, Harvey, Andy, Brooke and Brett. The Georgantas family – Jennifer, Dimitri, Cassie and Pano, sailed a 36-foot boat named Ciaron. Patricia and George Snyder teamed up with Daryl, Alison and Alex Sims, to sail Rumours, another 36-footer. And the Techmanskis – Terri, Jeff and their two boys, Ross and Ryan, sailed the Gladwyn.

Organizing the trip was a labor of love for John and Janus. At a party in their villa on the island of Lefkada, they noted the happy tan faces of the relaxed sailors and enjoyed hearing their many stories.

For Gus, George and others it was the fulfillment of a dream, following an ancient lineage. “There’s all this mythology, and here we are sailing through it all,” Gus reminisced. “One of the stops was the mythical island of Ithaca, which is where Odysseus was trying to get to. It took him 40 years, and we got there in an hour.... It makes you think about things like where the wind is coming from and how you get there. The weather might change, the wind might pick up, and what are you going to do?”

He had a chance to find out first-hand one afternoon. The group was leaving a little cove, and he got a report that the winds were picking up. “I kind of underestimated how difficult it would be to deal with sails in a strong wind; I let it out too far and didn’t control it, and the wind took it.”

What followed was a frightening ordeal, with Pamela trying to steer a violently bucking boat while Gus fought to reel the sail back in, the rapidly slipping rope tearing at his bleeding hands. Finally they managed to get the boat under control.

Their days were action-packed; they went caving on one island and saw how olives are pressed on another one. They visited the island of Skorpios, where the late Aristotle Onassis had his home. And they let loose on the last day with a wild, all-out dinghy race.

Perhaps the most memorable part was the Fourth of July celebration; the charter company had arranged to meet them on a private island and prepare a big barbecue and fireworks, American style. “The folks from the charter company were Brits, and here they were putting on an American Independence Day for some Greeks and Americans in Greece,” Gus recalled. “We all had a big laugh about that.”

But the best part was going back to the basics, and just being together. At night, the fleet was moored close together. The captains met every morning with their charts and discussed the route and the issues they would face that day, like expected winds or shallow depths. Then everyone would go within an hour or so. People could go at their own pace and didn’t necessarily follow the same exact route.

“Sometimes you would see the other boats, sometime you wouldn’t,” said Pamela. Each had hung an American flag up high, where they could easily distinguish each other’s boats from a distance. “There were quite a lot of sail boats,” said Pamela.

The crews used radios to check in with each other and share recommendations. The mooring process was the most difficult aspect.

“One of the beautiful things about sailing in a flotilla around islands located close together is that you could go out and sail all day, have your time as a family, and then moor on the island,” said Janus. “You could meet up at the taverns each night for drinks and stories.”

“We’re both busy attorneys, and we love our lives – but we’re so busy,” said Pamela. “They say Americans live to work; the Europeans work when they need it to live. It’s a simpler way of life.... Spending time with each other, without the TV on and everything else – just living.”

Asked her advice for other travelers who might want to do something similar, Pamela didn’t hesitate.

“I would say – do it! You have to take these leaps of faith to do things outside your comfort zone,” she said. “We made a lot of great friends and had a wonderful family adventure. You learn a lot about yourself and how to live life.”

A license is required for “bare boat” rentals, that is, rental of the boat without any technical assistance or crew. It takes rigorous training to get that license. It took her husband Gus nearly a year, taking written tests and then the final exam, a three-day sail from Kemah with the instructors.

“After that, they encourage you to keep sailing every couple weeks and to keep a log book,” Pamela said. “That being said, as a novice or for any sailor that hasn’t sailed that area before, we would recommend that they go in a flotilla, not alone, and at least one of the boats hire a captain from the sailing company that is familiar with the waters, ports and boats.”