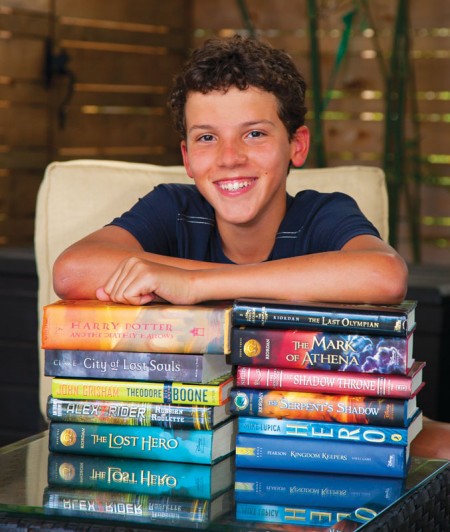 It’s time again to check on what everyone’s reading. This year everyone’s been talking about so many poignant books for teens – books that both the 12-ish set and their parents have been reading – that we thought it would be fun to include them in the mix. There’s something for everyone.

Twelve-year-old Joshua Rassin is well-equipped to review books. A rising seventh grader at Pershing Middle School, Josh whizzed through his school’s 2013 summer reading list, after which he proceeded to read every book on the Texas Library Association’s middle school recommendations via its Lone Star Reading List. His all-time, No. 1 recommendation? Wonder, by R.J. Palacio.

“This is my best recommendation for anyone in middle school, boy or girl,” Josh says. “Pershing recommended it, and both my parents loved it too.”

Wonder is the story of Auggie, a boy born with severe facial deformities, who enters school for the first time in fifth grade, wanting nothing more than to be just like everyone else. But Auggie isn’t like everyone else. And herein lies the story, which weaves narratives from Auggie and the cast of characters in his orbit into what the author called “a meditation on kindness.” Josh says, “The message of the book is that everybody is the same. If someone is different, it doesn’t mean you should treat them differently.” Required reading for some middle-schoolers, Wonder is a book that brings laughter, tears and a heightened sense of empathy to readers of all ages.

Josh recommends The Lions of Little Rock, by Kristin Levine, as another book with a similar message. It’s the story of two 12-year-old girls starting middle school: one painfully shy, the other black and passing as white in 1958 Little Rock. It’s about friendship, history and racial discrimination. “The girl who everyone thought was white but wasn’t got kicked out of school, and then everyone made fun of her friend for being her friend,” Josh says.

Teen-lit recommendations don’t stop with teens. Kristen Leach, a mom of three boys and outgoing president of the West U Elementary PTO, encourages everyone to read John Green’s The Fault in Our Stars (which was mass-released in June as a movie). “The love story and the fight for a quality life by the main characters was beautiful,” Kristen says. “The fact that they were thoughtful, smart, deep teenagers was fitting because they were facing more than anyone should ever have to. They didn’t have the luxury to be concerned with superficial things when they were in a battle for their lives…. I sobbed at the end, but I am very glad I read it.” Other John Green books that are immensely popular with 13-year-old girls, their moms and their moms’ friends: Looking for Alaska and Paper Towns.

Kristen also suggests Orphan Train, by Christina Baker Kline. Set in the early 1900s and present day, it tells the history of orphan trains, which carried children to adoptive families from the mid-1800s until the early 1930s, through the story of a foster teen and the woman she works for. “The history behind this book is fascinating,” Kristen says. “The main characters are resilient people who forge unexpected friendships. It is a good book to take to the beach.”

The Rosie Project, by Graeme Simsion, is another favorite of Kristen’s. “The protagonist is a genetics professor with undiagnosed Asperger’s,” she says. “It was interesting to have the main character be brilliant but completely oblivious to his own issues. It is a fun and quirky book [and] a fast read.”

ABC anchor Dan Harris’ new bestseller fits into the non-fiction but still beach-worthy category. 10% Happier: How I Tamed the Voice in My Head, Reduced Stress Without Losing My Edge, and Found Self-Help That Actually Works – A True Story is the story of Harris’ on-air panic attack, which led Harris, who “always assumed that meditation was for robed gurus, acid-droppers, and people who keep yurts in their backyard,” to find that meditation really did help him become “10 percent happier.”

Ali Katz, who is always reading and also is working to become certified to teach meditation, says, “Dan’s experiences are incredibly relatable, and his access to so many of our world’s spiritual leaders make him an amazing source for information and unique perspective. [He] is the average Joe learning to meditate.” Harris will be speaking in Houston at The Jung Center’s Spring Benefit on March 31, 2015.

Insignia, by S.J. Kinkaid, “because it has action and suspense and it’s sort of in the future where they battle and put computers in the kids’ heads, like a video game.”

Curveball: The Year I Lost My Grip, by Jordan Sonnenblick, “because [the protagonist] is really good at baseball but pitched too much, and then he learns photography from his grandfather and shows how hard life can be, but that you don’t stop, you keep moving on.”

Rocket Boys, by Homer Hickam, “who was actually an astronaut who went to space, and this is the story about him growing up and taking up rocket building, even though everyone was opposed to it.” Rocket Boys is the No. 1 New York Times best-seller that inspired the movie October Sky.