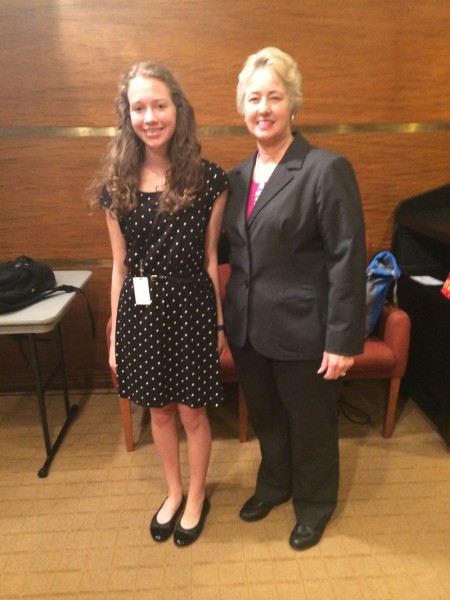 Cara Maines poses for a photo with Mayor Annise Parker after a mock press conference.

Monday through Friday for almost four weeks this summer, I woke up early, donned work-appropriate attire and looped my name tag and badge around my neck. I was ready to attend the annual Houston Chronicle High School Journalism Workshop.

I buzzed my way into the side door of the Chronicle facilities, where I took an elevator up to the fourth floor. From there, I greeted my classmates and downed some coffee to prepare for three and a half hours of talking about writing and the media. As torturous and sleep-inducing as this schedule may seem to some teenagers, the Workshop was actually one of the highlights of my summer.

As a member of the Workshop, I had the opportunity to interview the mayor, appear on live TV and meet real journalists. And throughout all of these experiences, I made friends with other students across Houston who were as passionate about journalism as I am. At the end of those three and a half weeks, I came home with a stack of newspapers that my classmates and I wrote and edited.

Journalists from the Houston Chronicle and members of related fields gave lectures and Q & A’s about their various fields. In addition to Chronicle speakers, we listened to speakers who worked in digital and broadcast media, public relations and advertising. They talked to us about their work schedules, skills aspiring journalists should practice and the future of print and digital media.

On an especially memorable day, my class sat in the audience of local TV show Great Day Houston with Deborah Duncan. Our teacher, Ms. Smith, even won a waterproof phone from a giveaway. As my class cheered and clapped, I realized the scope and span of journalism in the digital era. I had never before considered all of these different components and styles of journalism, including photography, video, television and radio.

I have been a member of my school newspaper, The Review, for two years. In that time, I have learned about writing and reporting, all of the nitty-gritty details that go into producing a publication.

The Houston Chronicle Workshop showed me something I had never seen before. I saw all of the people who go into making a newspaper or broadcast. I was able to glimpse into their lives and see what makes them keep coming back to work and staying late every single day. That’s worth waking up early for.