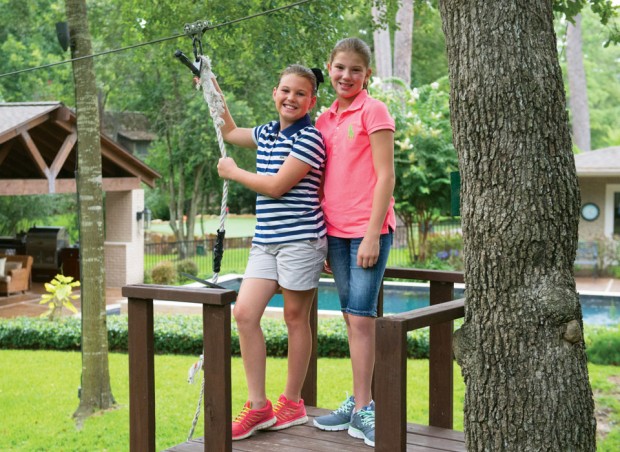 Paige Pesek and Claire Boudreaux (from left) enjoy an afternoon of fun in the Peseks’ kid-focused backyard.

Go play outside! has been shouted at children for generations. Today, it is Mom’s mantra when she has had enough of her children being glued to phones, tablets or Xbox consoles. But outdoor play doesn’t keep screen-oriented children as occupied as it once did. Within minutes of being thrown out the back door, the kiddos often come back in declaring that there is nothing to do.

To lure children outdoors and give themselves some grown-up play space as well, some Buzz-neighborhood parents are installing elaborate outdoor equipment to create upscale, modern versions of the cool house on the block.

Building a great backyard was a must when attorney Carlos Abello and his wife, April, searched for a location to build their new house. They found a large corner lot on a horseshoe street for their classic Mediterranean home. The Abello children, 14-year-old Carlos and 10-year-old Mia, who attend The Kinkaid School, only have to step outside to find a batting cage, sport court, trampoline, ping pong table and a pool with a cabana.
“One thing we don’t have is a tennis court. My sport got left out. How did that happen?” April said, laughing.

One of dad Carlos’ favorite spots is the batting cage. He has coached baseball and softball for several years. In the spring, Mia’s tournament softball team, the Marucci Lady Bulls, and Carlos’ premier baseball team, the Spring Branch Mustangs, will get the benefit of extra practice and instruction in the Abellos’ backyard.

During football season the Abellos spend Sundays watching the Texans’ away games on their large outdoor TV, which sits above the fireplace in the cabana. They are eager to actually use the fireplace if the weather ever cools down. They also hold family ping-pong tournaments, which teen Carlos almost always wins. “I never win,” April said.

Jennifer and Todd Colter also created a yard to entertain their four children between 1 and 10. The Colters moved in about three years ago and installed several kid-friendly structures. Todd and 10-year-old son Lincoln shoot hoops on the sport court and golf on the putting green. One of the best parts of the yard for daughters Carolyn, Charlotte and Corinne is the huge play structure with swings, four slides and two bridges.

“The jungle gym is about 20 feet tall,” said Todd. “We installed artificial turf underneath to help soften any falls.” The Colter girls have all sorts of real and imaginary adventures there. In their minds, it’s a castle. “The girls love to dress it up,” Todd said. “We even put Christmas lights on it.”

Nine-year-old Paige Pesek also has a backyard to envy. A fourth grader at St. Cecilia Catholic School, Paige enjoys having her friends over to swim in the pool and ride the zip line that runs almost the whole length of the large backyard. To ride the zip line, Paige first climbs a ladder to a wooden platform. From there she grabs the handles, jumps on the seat and rides down the cable line to a large pine tree across the yard.

“It’s perfect for us. The kids can swim while the adults hang out in the outdoor kitchen area and grill and watch games on TV,” said Amy Pesek. When Amy and husband Darrell entertain poolside, quite a few adults take a turn on the zip line, as well.

Darrell’s favorite part of the yard is the putting green they had installed by a local landscape company that specializes in synthetic turf for recreational use in residential yards. Occasionally weeds grow up from the ground through the turf and Darrell gets them out of there immediately. “That’s his baby,” said Amy. Golf is a father-daughter activity for Darrell and Paige. They spend time together on the putting green and then hit the course at Lakeside Country Club.

Even with all of this entertainment, kids occasionally come inside to say they are bored. What is Amy’s response? A resounding, “Are you kidding me?!” 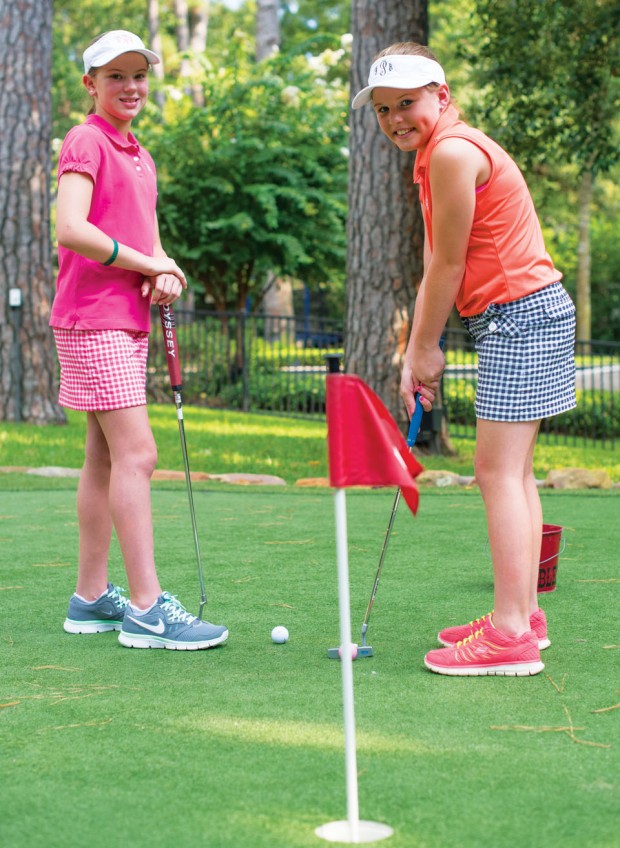 Claire Boudreaux and Paige Pesek (from left) swing their clubs on the Peseks’ putting green. 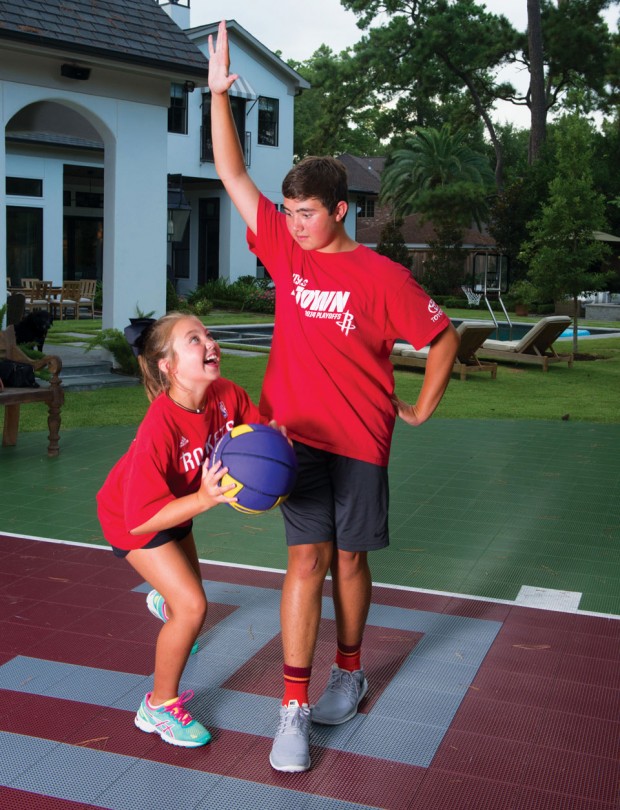 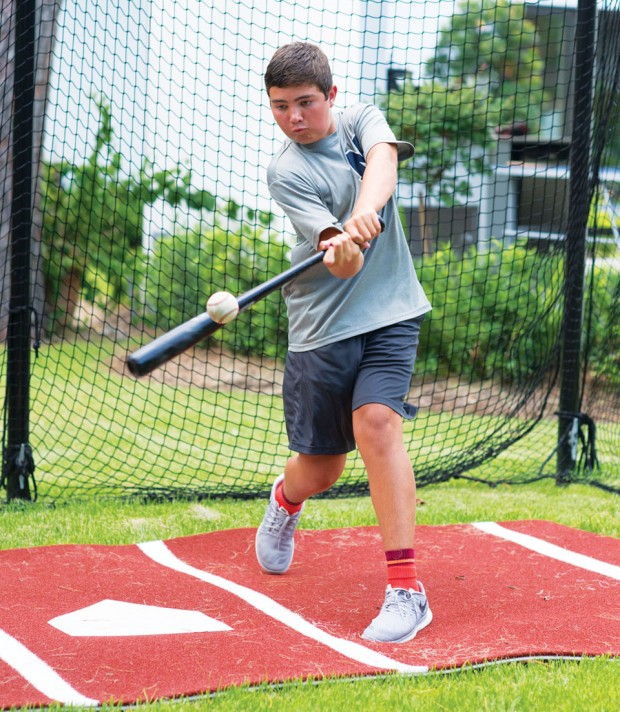 Carlos Abello works on his swing in the batting cage in his own backyard. 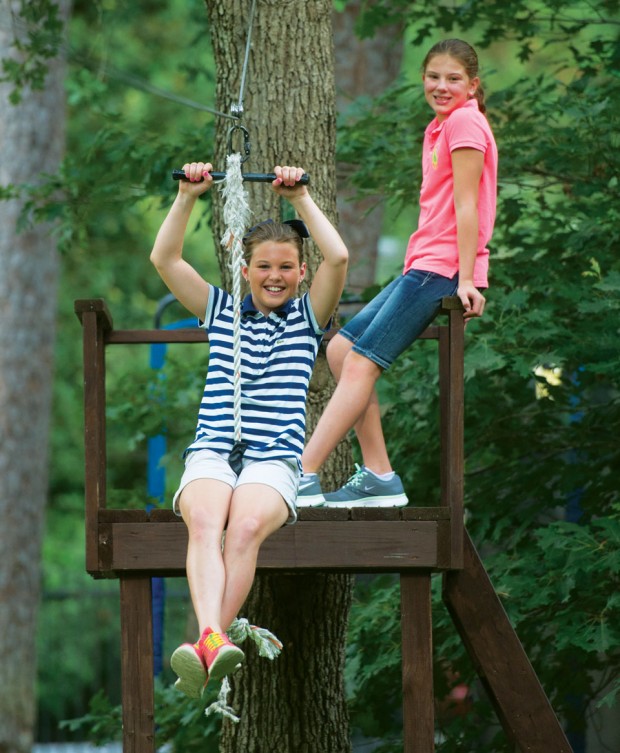