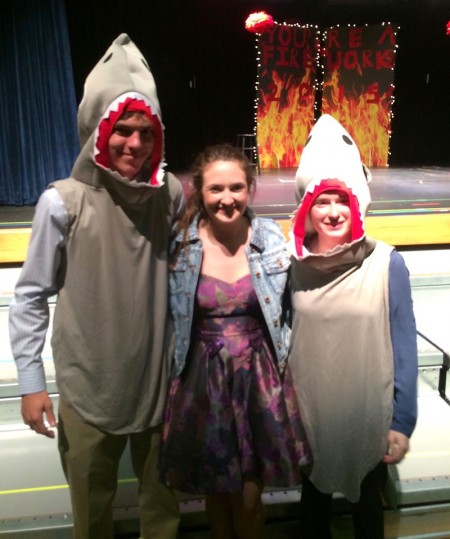 "Now introducing your hosts, Matthew Gregg and Abby Reichert!" With this, the 2015 Briarwood Talent Show began. This event marked Briarwood's third annual talent show. The first show, three years ago, was a smashing hit. Since then, the show’s faculty sponsor, Ms. Wood, with help from Student Council has kept the event alive and running smoothly.

This year the show had 12 acts including singers, dancers, a comedy skit, and a guitarist. I had the privilege of hosting the talent show with Abby Reichert and Sarah Cate Jones. The theme of the talent show was “Baby, You're a Firework” after Katy Perry's song “Firework.” Emulating Perry’s 2015 Super Bowl performance, two of the show emcees wore shark costumes while the third wore a bright blue wig in the style of Katy Perry.

Prior to the show, Student Council hosted a Bake Off, which included a variety of yummy goodies from brownies to pudding cakes. With full bellies, the audience filled the auditorium, enthusiastic for entertainment.  The show began with an upbeat dance act to the song “What a Feeling,” a throwback to the 80s. One group performed a Three Stooges comedy; another sang and played guitar to Florida-Georgia Line’s fun summer song “Cruise.” One of the most popular acts of the night was a tap routine to Bette Midler’s “In the Mood.”  Songs ranged from country to hip-hop; a couple of singers even sang acapella.

As hosts, the emcees had multiple jobs including introducing the acts, getting the crowd engaged, and stalling when participants needed more time behind the curtain to set up for the next acts, all of which are easier said than done. While writing the script a few weeks prior, we realized that it was going to be much harder than originally thought. Making sure that all the introductions were creative and didn't sound redundant was a challenge, but after some brainstorming, we finally got it written.

Stalling between acts wasn't easy; corny one-liner jokes only go so far. Quickly we exhausted our filler material, which led to some improvisation. Luckily, with clever thinking, spontaneous dancing, and interesting trivia we were able to fill the time.

As in previous years, the Student Council donated the proceeds of the event to a charitable organization. This year we chose the National Organization on Mental Illness, which focuses on advocating and educating people about mental illnesses. I think this is what makes our talent show special. We provide an outlet for our students to express their creativity while helping those in need.