The kids are listening 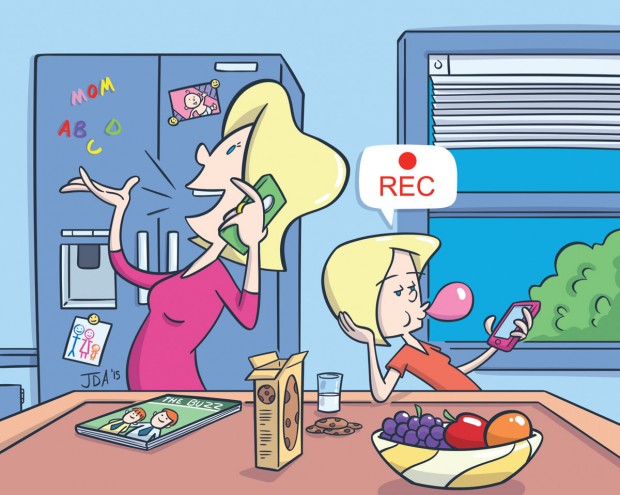 You might think the kids aren't listening to your conversations – but they probably are. (Illustration: behance.net/runamokstudios)

The other day I was sitting in the kitchen talking, as I do a lot, to my older daughter, who had one earbud in one ear, the other dangling from her head, phone in hand, eyes fixated on the screen. As she does a lot.

I was trying to engage my sweet 15 year old partially to avert her eyes from the phone for just a few minutes, partially because I really just wanted to visit. I thought I might share with her what I was up to, not that she would be interested, but also not that I could help trying. Full-blab style, I started in, mostly and not-too-consciously expecting a, “Humph,” and maybe a funny look in my direction.

But when I told her I was writing a story about “what your children hear when you don’t know they’re hearing it,” she literally choked on a grape.

Whoa. I had planned this story to be about smaller kids (see the cute anecdote below). Clearly I had overlooked something essential, both in the story and in my life.

“So, what is it you’re hearing when I don’t know you’re listening?” I asked my daughter as casually as I could so as not to make her retreat back into FaceTime.

“It depends on who you’re talking to,” she told me. “Sometimes you’ll be talking about stories about other people, and I’ll ask you what’s going on, and you’ll be like, ‘I can’t tell you,’ and then I’m just like, ‘Okay, I already know.’”

“Excuse me, like, what kinds of stories do you already know?” I asked her.  I had already begun typing. This conversation was interesting on so many levels, not the least of which was that it was writing my story for me.

“You might not want to put that in there,” she said. Yikes.

Apparently my conversations are monitored much more closely than I realized. “It doesn’t necessarily have to be when you’re on the phone,” she told me. Well, I knew that any phone conversation was subject to endless questions from either of my daughters: Who is that? What do they want? What was that thing you were talking about when you said, “I know”?

“We could be at dinner with people. And then I really find things out if I pay attention.”

Aren’t all the kids at the other end of the table?

Meredith, a social worker at Texas Children’s Hospital who has three children ages 6 through 17, was having a “long discussion” with UPS over the phone in her car one afternoon. “It was the 100-year celebration for Condit [Elementary School]. We were having a Great Gatsby-themed auction party, and I was on the planning committee.

“I had ordered bags with logos, and I had paid extra to have them rushed by UPS. I got half of the order, and the other half was sitting in a truck somewhere in Houston. I was not cussing or mean, but I didn’t understand why I couldn’t go to the facility and pick them up.” The gala was that night.

Meredith was on the phone for what she calls “a very long time,” with 6-year-old Gianna waiting patiently in the back seat. “We get home and Gianna hands me a note she’s written to UPS.” Gianna’s note told UPS, in no uncertain terms, that they could not “do this” to her mother, and they needed to fix the situation. “It’s all folded like a letter, and she says, ‘Mom, could you put this in the mail to UPS today?’ Thank God I didn’t cuss.”

Little did Meredith remember that many years earlier, she had had to go to Gianna’s big sister Gabbi’s first-grade teachers, asking them to watch what they said in the hallways.

“[Gabbi, now 17] would come home and tell me everything – who the teachers didn’t like, who had misbehaved all morning and was getting sent to the principal.”

But really, these funny stories barely chip the iceberg. Road rage, off-color jokes, gossip about other kids at school – and their parents. It’ll all come back to haunt us.

What about the kid who overhears Mom discussing Aunt Jane’s penchant for vodka?

They don’t always tell us what they’ve heard – or if they’ve heard anything at all. But if you’ve ever been startled by your precious 2 year old repeating the “s-word” or the “d-word” or worse, you’ve got to believe those little (and no-longer-so-little) ears are pretty powerful.