A second set of parents 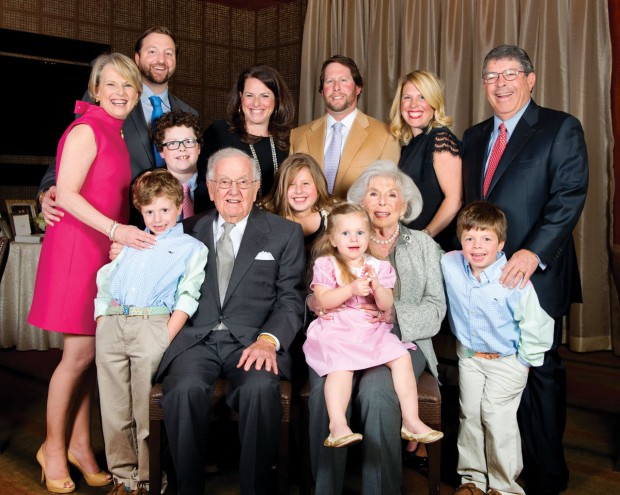 For sisters Ellyn Haikin Josef and Jennifer Haikin Zach, grandparent involvement in their children’s lives was guaranteed years before either thought about having children.

“When we were babies, my great-grandparents, my grandmother Sally’s parents, would help my mom with bath and bedtime every night while my dad was working,” Ellyn says. “They would keep us when my parents and grandparents would travel together.”

That level of engagement set the tone for four generations of multi-generational parenting.

The girls’ grandparents, Sally and Bernie Fuchs, followed suit. “Growing up, we lived around the corner from my grandparents [their mother, Roslyn Fuchs Haikin’s parents],” Ellyn remembers. “My grandmother was such a phenomenal cook that Jennifer and I would figure out what she was making for dinner and we would just leave our house and go over there. We would have dinner with them a couple of nights a week, if not more.”

But dinner was just the start. As children, Ellyn and Jennifer were always in different schools. And because they were four years apart, their extracurricular schedules differed significantly. Each afternoon, both were dismissed from their respective schools – Ellyn at St. John’s, and Jennifer at Shlenker, St. Francis and then Episcopal – at the same time.

“My grandmother would pick one of us up every day after school, which was a huge help to my mom,” Ellyn says. Sally even dressed up as Raggedy Ann for Ellyn’s St. John’s class, one of many contributions as a volunteer for her granddaughters’ schools.

Beyond school, Sally and Bernie went with their daughter Roslyn and son-in-law Ricky Haikin to “every visiting day at camp, every parents’ weekend at college, every graduation. There was no day-to-day or life-cycle event they missed,” Ellyn says.

“[My grandmother] was 42 when I was born, so we just had another set of parents. There was no distinction. That was for better or worse: They didn’t get the grandparent best behavior like others did, because they were just our other parents.”

Jennifer says, “We didn’t have the grandparents who said, ‘Oh, you’re perfect and wonderful.’ I’m 36 and still get told to put makeup on. Now my grandparents call my kids and ask what they made on their tests. There’s an expectation there that some grandparents don’t necessarily have.”

Now that Ellyn and Jennifer have five children between them, ranging in age from 3 to 10, Sally and Bernie – along with Roslyn and Ricky – continue to be present for every occasion in their great-grandchildren’s and grandchildren’s lives.

“It’s seamless,” Ellyn says. “My mom picks up some of the five at school a couple times a week, whether we need it or whether she wants it.” All five attend The Shlenker School. “My mom is just as involved at school as most parents, and more so than some,” Ellyn says. “Because I work full-time [as pro-bono counsel at Vinson & Elkins], sometimes we need a parent. When I can’t be there, there’s no distinction between my mom and dad and me.”

As she shared her family’s stories, Ellyn said, “Right now I’m watching my dad walk between two Little League games. Four out of the five grandchildren are playing Little League, and my dad made a spreadsheet schedule so that he could come to all the games.”

Ellyn’s and Jennifer’s father, Ricky Haikin, says, “It’s all about the priority we placed on family ahead of everything else and on impressing on our children and now our grandchildren how important that is.

Ellyn echoes her father’s sentiment. “You get out what you put in,” she says. “The most significant thing is the bond we have. When you put in all that effort, you get it back exponentially. Just a few years ago was the first time we had ever taken a family trip without my grandparents. It’s not an obligation. We just truly want to be together. I think it’s because of the effort and time that my grandparents and then parents put in.”

Jennifer agrees. “For me, my grandparents completely influenced my upbringing and my person. Now my kids have that relationship with their grandparents, and that has trickled down as traditions and appreciation for family. I feel like I’m already instilling that in my children.”