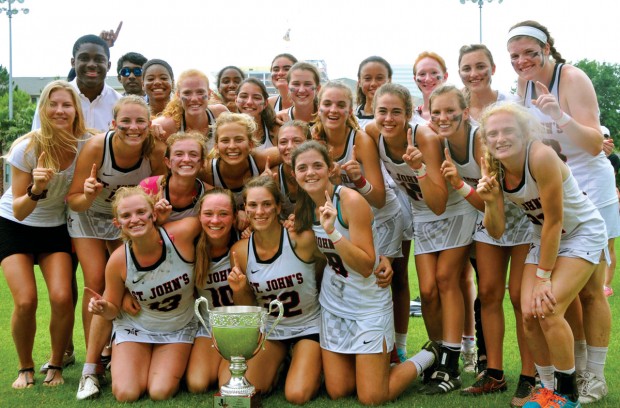 “It was a tremendous state final between two teams that were undefeated against Texas opponents,” said Mavericks head coach Angie Kensinger.

“It was a really aggressive game against Coppell,” said Mavericks senior captain Kendall Bernard. “It was pretty feisty, but we have a really mentally tough team. I think that was a big part of our success this year. Our chemistry was pretty unique.”

For Mavericks senior Nell Copeland, who’ll play college lacrosse at Northwestern, the title took on added significance given that her younger twin sophomore sisters Kate and Carson also play for the Mavericks. “I’ve been a part of three state championships here at St. John’s, and this one has to rank at the top. To celebrate the state titles with my sisters is incredible.” 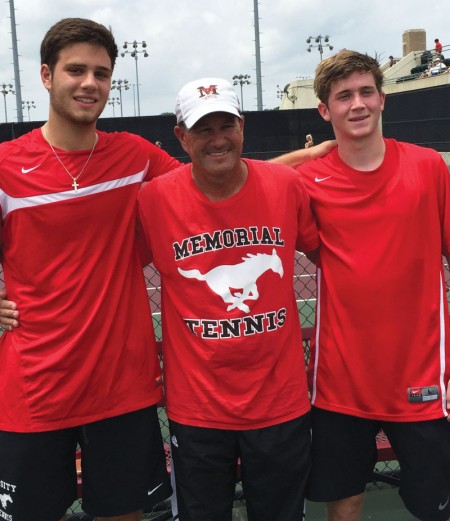 With seven different players scoring in the title game (Kara Wollmers, Elizabeth Cregan, Alice Chambers, Lindsey McKone, Nell and Kate Copeland and Jessica Nyquist), plus, a great defense from goalie Winnie Brandfield-Harvey, the Mavericks closed out the year with an undefeated 21-0 record.

“I think one thing it came back to was our depth across the lineup,” said Cregan. “We truly supported and trusted each other.

In tennis, it was another magnificent season for the Memorial Mustangs, capped off of by a Class 6A boys doubles state championship from the tandem of senior Sam Giammalva and junior Max Palmer. The victory also marked the third consecutive state title in boys doubles for Memorial.

“Sam and Max were the favorites going into state, but you still have to play to the very best of your abilities to win it all,” said Memorial tennis coach Bud Booth. Giammalva will play tennis next fall for Texas A&M, while Palmer, a state-ranked junior, will be back for the Mustangs next season.

Memorial’s Tadhg Collins, who won the regional championship in boys singles, advanced to state, as did fellow Mustang Dane Esses. Those two faced off earlier in the regional finals, where Collins defeated his Memorial teammate for the regional title. At the state tournament, Collins was eliminated in his quarterfinals match. “For us to send two singles players to state and also win the state doubles championship was pretty fantastic,” said Booth.

In Class 5A tennis, Stratford Spartan Josh Holloway became the first Stratford player ever to win a state championship in singles play. The Spartans senior, who will play for St. Mary’s University, capped off a brilliant career with a dominant straight-set victory in the championship finals. “It was a dream come true,” said Holloway. “Winning state was my No. 1 goal for a long time.” 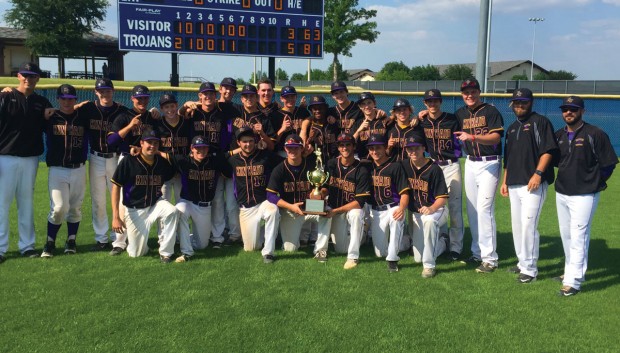 With their victory over Dallas St. Mark’s in the title game, the Kinkaid Falcons celebrated their first  SPC Baseball Championship since the 2006 season.

In baseball, the Kinkaid Falcons won their first Southwest Preparatory Conference championship since 2006. At the SPC tournament, Kinkaid rallied in come-from-behind victories over St. Andrews and Episcopal, before defeating Dallas St. Mark’s 5-3 in the title game.

“It just shows the resiliency of this team,” said Falcons head coach Steve Mass. “Our senior leadership is what really made a difference.”

That senior leadership included the Falcons trio of Will Gaus, Joe Beeler and Neal Bhatia. “It means everything with this being the last year together for the three of us,” said Bhatia.

For Beeler, the championship was especially sweet after a disappointing season last year. “We thought we were going to win it all last year, and we had to settle for the Division 2 tournament. That was kind of rough, but we came together and got it done.”

“It definitely meant a lot after coming up short the last couple of years,” added Gaus. “It just feels great to come out on top in our senior year.”

On the fast track, Lamar High School’s Julia Heymach capped of a simply spectacular sophomore season by winning gold medals in both the 1,600- and 3,200-meter runs at the UIL Class 6A state track and field meet. In the 1,600 meters, Heymach’s winning time of 4:40.97 shattered the class record by a full three seconds.

With two years stillremaining in her varsity career, Heymach is on pace to make her mark as one of the great distance runners in Texas track and field history. “I’d love to ultimately place in the top three of the Nike Nationals for cross country,” Heymach said, “and also win national titles in the mile and 2-mile run.”