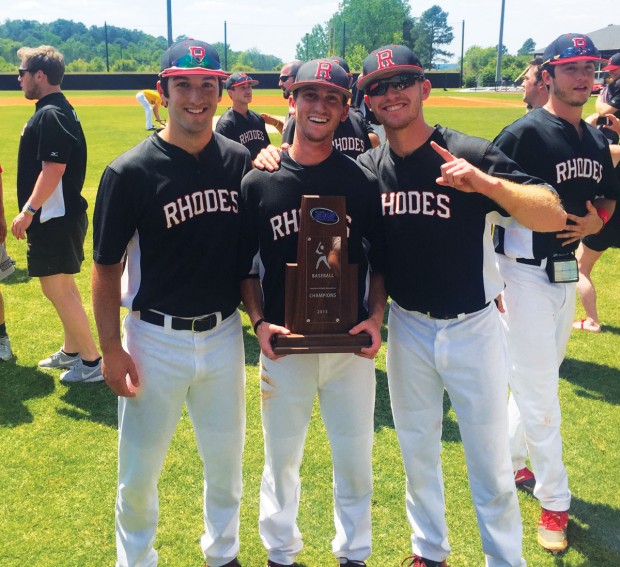 Former Bellaire Little Leaguers Ryan Olive, Blake Glauben and Bennett Notestine (from left) have reunited to lead the Rhodes College baseball team to its first conference championship in school history. They are pictured right after the Lynx won the Southern Athletic Association title.

Far removed from their days as all-star players for Bellaire Little League, Blake Glauben, Ryan Olive and Bennett Notestine have had quite the reunion on the collegiate baseball level. The trio recently led the Rhodes College Lynx to the first conference championship in school history, with the NCAA Division III team winning the Southern Athletic Association title.

“It was really a coincidence that the three of us landed back as teammates after all these years,” said Notestine. “Rhodes College has a pretty good pipeline to Houston, and we actually have several other Houston guys on our team.”

Notestine, who played high school baseball at The Kinkaid School, and Glauben, an Emery/Weiner School alum, played on the 2007 12-year old Bellaire Little League team, while Olive, a St. Thomas High School graduate, was on the 2006 Bellaire squad. “Admittedly, we still talk about those Little League days, and we try and keep up with the guys from back then who went on to play college baseball,” said Notestine.

At the collegiate level, Notestine is the Lynx starting left fielder, and he led the team in hitting with a .387 average. Olive, the starting centerfielder, led the Lynx in RBIs (42) while hitting for a .319 average. Glauben, a starting pitcher, also led the team in saves, including saves in both wins at the conference championship series.

“It was awesome to win the school’s first ever championship and pretty much kick off a new age of baseball for Rhodes,” said Notestine. “Plus, to do so with guys I played Little League baseball with is pretty special.”

Over at St. Agnes Academy, it’s been a special reunion on the high school level for a group of nine players who are all products of the West University Softball Association. This past season, Maddie and Colby Heno, Quinn Biggio, Jordan Howard, Zoe Clutterbuck, Alice Watts, Zoe Narvacan, Maddie Van Brunt and Taylor Lee helped lead St. Agnes to the TAPPS 5A regional finals.

“I can’t say enough about what the WUSA program has meant to these girls,” said Maddie and Colby’s father, Scott Heno. “The league emphasizes the development of young women through sportsmanship, leadership and teamwork.”

It isn’t only at St. Agnes that the WUSA players are making an impact, with approximately 100 products of the league currently playing high school softball in Houston. In addition to St. Agnes, the majority of the girls play for Episcopal, Lamar, Bellaire and St. John’s. 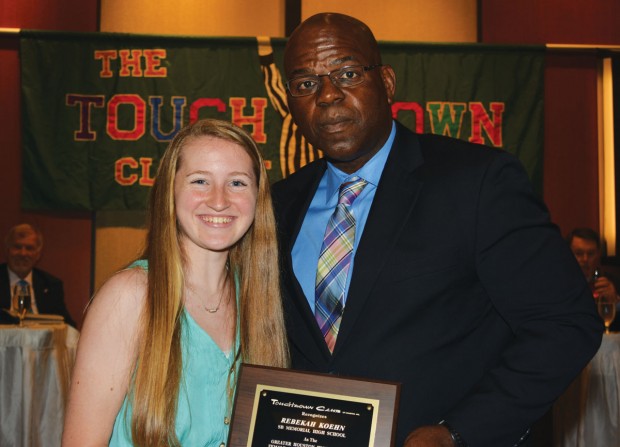 Memorial High School soccer player Rebekah Koehn was one of four Mustangs to win Scholar Athlete of the Year awards from the Touchdown Club of Houston. Pictured with Koehn is HISD assistant athletic director Andre Walker.

It was an impressive showing by a contingent of Memorial Mustangs at the Touchdown Club of Houston’s 49th annual Spring Sports Scholar Athlete Banquet. Memorial’s Rebekah Koehn (Girls Soccer), Alexandra Buscher (Girls Swimming), Lauren Deutser (Girls Track) and David Van Slyke (Boys Track) were named Scholar Athletes of the Year for their respective sports, as was Stratford Spartan Reese Davis (Boys Basketball). Judging was based on athletic and academic achievement as well as community service and extracurricular activities.