For the first time in school history, Emery won the TAPPS Division I 6-Man Football State Championship. From offseason spring practice all the way to Thursday night, the Jags have put nonstop effort into making a playoff run. Their goal of just winning one playoff game was surpassed greatly as they took the state championship.

Even from the very beginning, the Jags’ leaders knew that they had something special brewing.

Lewis Graubart said, “The team as a whole never wanted to lose again and we all knew how losing your season felt.” 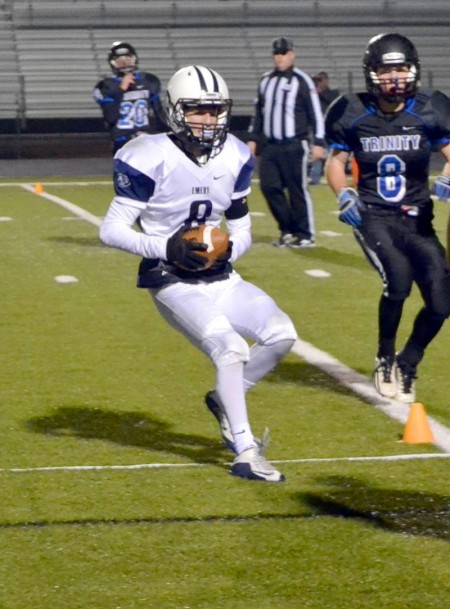 Keeping up with their main goal, Emery dominated opponents all year, going 8-2 to finish the regular season, including 5-0 out of district, all by mercy ruling the teams they played. The playoffs saw a rebirth in the dominant play after a tough stretch to end the season.

“We had a team meeting because we didn’t have our same fire after our second loss, and then we realized we weren’t done playing this season,” Lewis said.

Emery has shown resiliency all year, and their return to dominance from the earlier regular season showed the whole state that this team was for real and steamrolling towards a championship.

Emery took their first state championship very convincingly, with a tremendous offensive showing in the second and third quarters in an 84-58 win over the Midland Trinity Chargers. Everything for the Jaguars seemed to click. From the strong defensive play setting up scores for the offense, the coaching strategies, and the focus from the players, led to them hoisting the trophy Thursday night. David Kleban threw for 331 yards and 5 touchdowns, while running backs Jordan Loev and Harrison Rosenthal combined for 219 rushing yards and 5 touchdowns. On defense, Brandon Gomel snagged 3 interceptions and Cole Caress led the Jaguars with 10 tackles.

“We knew it all along, this team was really special,” Defensive coordinator Edwin Howard said after the win.

While the Jags are losing two key seniors in Harrison Rosenthal and Cole Caress, the juniors and sophomores of this young Emery team will be eyeing another state championship next year. The returning players next year will surely look to create a dynasty, winning back to back state championships.