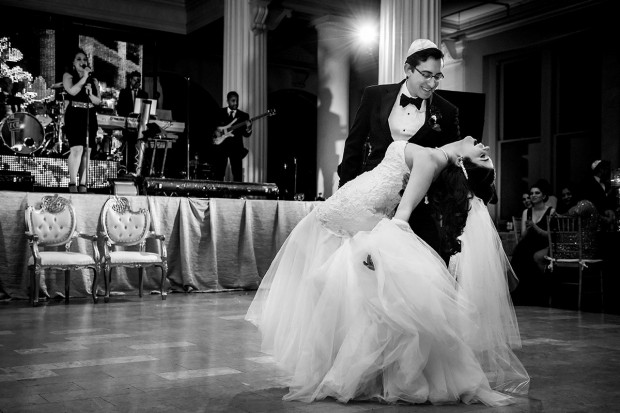 Dr. Melissa Goldberg and Evan Mintz first met as kids; their moms, Carol and Lauren, were sorority sisters during their time at University of Texas. Evan, a St. John’s School grad, and Melissa, an Emery/Weiner grad, grew up minutes away from each other, living in Meyerland (and later, Southside Place) and West U, respectively. Years later, they reconnected on JDate, and they married Jan. 17 at The Corinthian surrounded by 350 of their family and friends to celebrate with them. Before and during the ceremony, a Jewish klezmer band set the tone for the fun, traditional Jewish ceremony and during the reception, Emerald City Band had all of the guests up and dancing.

Evan, a Houston Chronicle writer, said his favorite moment was the first look, which took place during the Bedekken, a Jewish pre-ceremony reception, in which Evan placed Melissa’s veil over her face. Melissa, a postdoctoral fellow at Baylor College of Medicine, said her favorite moment was at the end of the night, when all of the guests were lining up to send off the newlyweds; the band played one last, romantic song for Evan and Melissa to dance to - "Unchained Melody" - just the two of them.