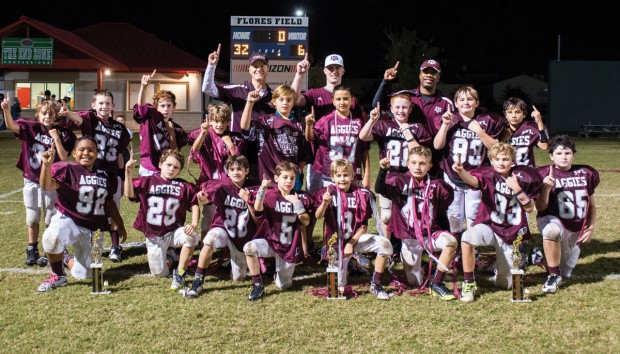 The Southwest Football League (SFL) sophomore division Aggies (pictured) won the 2015 championship. During the regular season, the Aggies had a couple of players injured who could not play. The boys wanted to win for their injured teammates, who cheered them on during every practice and game. They accomplished that goal with a 32-6 championship-game win. This was the third consecutive championship win for the Aggies. In an exciting introduction to the game, the executive SFL leadership had the game balls delivered to the field by sky divers. The proud Aggies are (top row, from left) head coach Peter Buettgen, assistant coach Shawn Mulcahy, assistant coach Lawrence Thomas, (middle row, from left) Andrew Campbell, Braden George, Charlie Pugh, Andrew Buettgen, Brady Reed, Dylan Alderete, Colin Mulcahy, Jack Allen Peveto, Jayan Shultz, (bottom row, from left) Maddox Braxton, Garrison Smith, Barrett Mossman, Connor Ayers, Matthew Buettgen, Jacob McWilliams, Carlton Payne and Adam Deutsch.