Take a deep breath and play 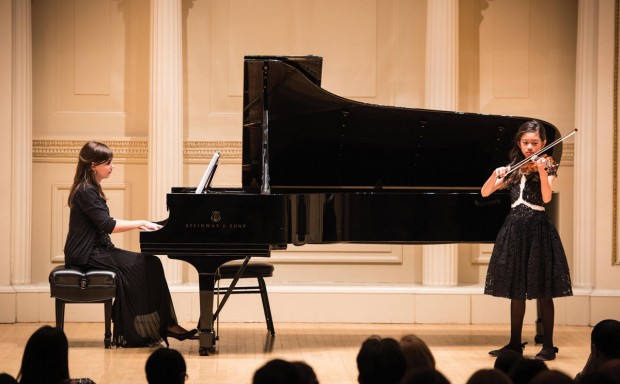 "How do you get to Carnegie Hall? Practice!” Carnegie Hall, located in Manhattan, New York, has been around for 124 years and is one of the most famous musical venues in the world. The Hall, which is actually split into three different performance spaces (Stern Auditorium, Zankel Hall and Weill Recital Hall), is usually reserved for classical symphonies and orchestras, but it has also hosted artists from other genres such as The Beatles, Jay Z and Judy Garland. I’m proud to say that I was offered the opportunity to play there as well.

I have played the violin for about three years and my teacher, Courtney Park at the Vivaldi Music Academy, is one reason for my success. She is a really nice and fun teacher who has nurtured my love for the violin. Violin has allowed me to express myself artistically, in a way I would have never imagined. I also enjoy acting, singing, golf, tennis, making bookmarks and drawing.

The night of the performance, when I was getting dressed, I was terrified. I was so nervous; I really just wanted to hide under the sheets and disappear. My brother, DJ, who was also playing at Carnegie Hall, was not even slightly nervous! When it was time for me to play, I took deep breaths, remembered to just do my best, and went out there and played. And as I approached the end of my song, I forgot how nervous I was and really enjoyed being out there, playing for the audience. As we left the hall, I felt like a huge weight had been lifted off my shoulders.

Never in my lifetime would I have ever imagined that I would be playing at Carnegie Hall. But now, I know that anything is possible. I can play in front of any audience and not be afraid. I feel like a different person and am thankful for this opportunity.