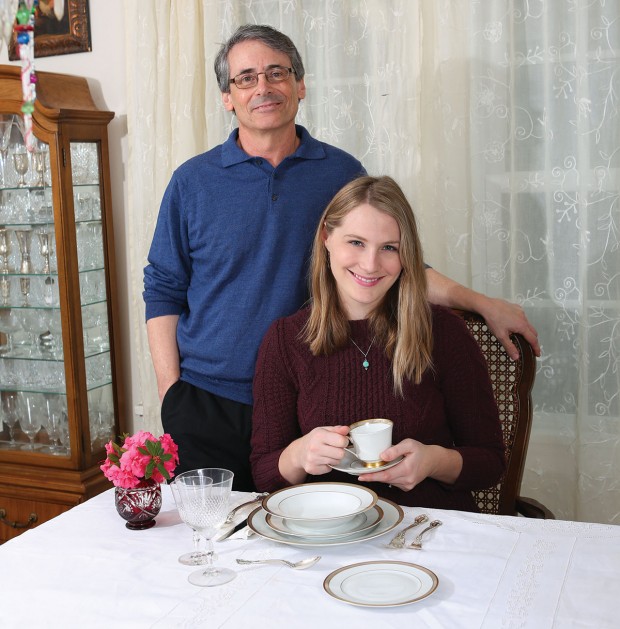 Thomas Kent is thrilled for his stepdaughter Devon Rutherford to use his mother's china and carry on her love of entertaining family. (Photo: lawellphoto.com)

Bride-to-be Devon Rutherford is validating the adage that everything old is new again. As she plans her April 9 wedding to Aaron Roberts, Devon, who is getting her teacher’s certification, has done what so many brides do: She’s registered for gifts. But for Devon and Aaron, choosing a china pattern was more about family history than it was about finding the perfect pattern.

“We had been looking at china,” Devon says, “and we picked out a pattern we liked. My mom said it looked similar to what she had in her china cabinet.”

What her mom had was Devon’s grandmother’s china. “It’s pretty simple. Off-white with taupe and gold rims,” Devon says. “My fiancé was pretty big on choosing. He’s not big on china in general, but he was happy when we decided to use my grandmother’s.”

Most excited, though, is Devon’s stepfather, Thomas Kent. “My grandmother loved to cook and entertain, so he really wants to see [the china] used again,” Devon says. Thomas, a neurologist, is sentimental about the gift. “It would have really made my mother happy to know that the gift to Devon was really appreciated,” he says.

“My mother grew up in rural Hungary. They had a very nice life there before World War II. When they came to this country, she tried to replicate the best memories she had from home, which were big dinners.

“One of the first gifts she got from her brother, who worked at Saks in New York, was an 18-piece china set. As her dinners grew, she got a second set, which is the one that Devon has. Devon grew up using that china every Thanksgiving and hearing the stories. 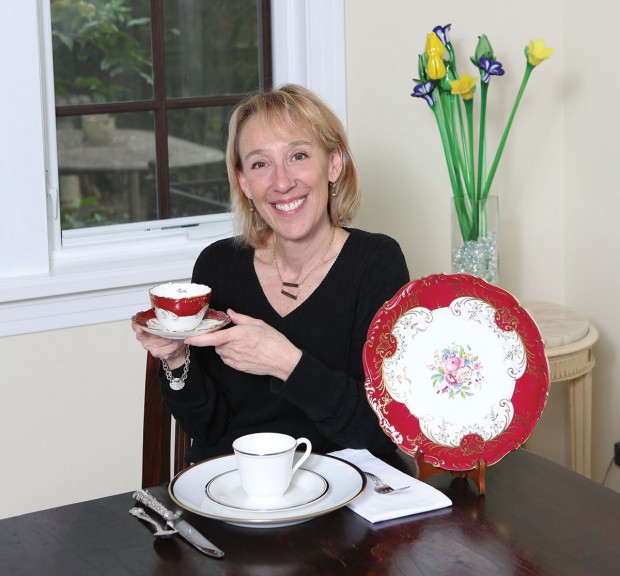 Lisa Sheinbaum, a mom of two girls and owner of Art for All, which encourages creativity in people with dementia, also loves using her family’s heirloom china, Coalport “Sandringham.” Having been passed down from her grandmother to her mother to Lisa, it’s “old and ornate,” she says. “My mom used it for family dinners. Now I use it – not terribly often, but on special occasions with family. I don’t use it for dinner parties. It’s more sentimental and meaningful to me, and I don’t want anything to happen to it.”

When Lisa married some 35 years ago, she chose her own pattern, Royal Doulton “Concord Platinum,” without influence from her grandmother’s. “It’s totally different,” she says. “One is red and gold with flowers and all kinds of stuff, and the one we bought was white with a platinum rim. Night and day.

“I knew I had something totally ornate, and it wasn’t really my style,” Lisa says. “But when I use it I love it. I love the history, the sentimental value.”

The china also reminds Lisa of family history and her hometown of Toronto. “I don’t want to get too mushy, but I don’t live where my family lives. It’s very important to me to have something from my past. It feels cozy.”

Lisa hopes that someday her girls will treasure their great-grandmother’s china. “I hope they won’t call Goodwill or put it in a garage sale!” she says. “I have plenty for them to divide up and hope they’ll use it for their families the same way we are doing now.”

Although Lisa didn’t try to coordinate her family’s china with her own, many brides choose to do so. When pairing old and new, like Devon and Aaron, things can get a little complicated.

So the couple worked with Sabrina Sims, chief registry consultant for Bering’s, to make their decisions. “What’s important to most people I work with is asserting their own style, but also holding on to tradition,” Sabrina says. “We try to incorporate tradition and new so they can put their own spin on it.”

Because Devon’s family pattern is so simple, she and Aaron chose accent pieces – Wedgewood “Basilica” salad plates and Herend “Babos” chargers. “To jazz it up,” she says.

“People come in with a different focus,” Sabrina says. “Some care about the handle on the teacup, so we’ll start there. Sometimes we work around a dinner plate.”

Only once has Sabrina encountered an insurmountable issue when helping brides and grooms select china. “It was six or seven years ago, and the guy had an opinion,” she says. “There was an argument on the floor, and I had to step away. They ended up not getting married.”

Maybe they should have stuck with the family china.

An Evening With Christina Wells