To change or not to change 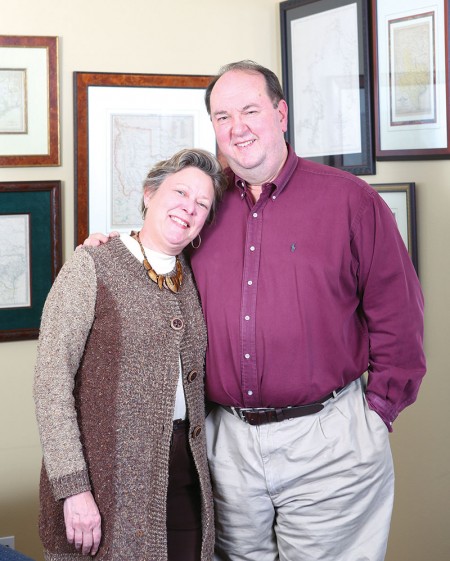 Sarah Duckers and Mark Davidson have been married for 19 years and share everything except for their last names. Duckers opted to keep her maiden name after marriage. (Photo: lawellphoto.com)

Mark Davidson has a unique perspective on weddings and marriage. As a judge for the past 27 years, Mark has performed 1,000 weddings. Combine that with being married for 19 years to his wife, attorney Sarah Duckers, and you get someone who has the first word on last names when it comes to marriage.

“I would think that the decision to change a name should be that of the bride,” says Davidson, a Buzz resident and retired judge of the 11th District Court, and currently assigned to hear multi-district litigation on asbestos claims. When he married in 1997, he was supportive of his wife’s decision not to change her last name to his. “I suggested that Sarah keep her last name because she had a well-known professional name in legal circles within her specialized field.”

Duckers says she had multiple reasons for keeping her name. “I had been a practicing lawyer for over 14 years, and I didn’t want to give that up,” says Duckers, a partner at Sechrist Duckers LLP. “Also the last name Duckers is very uncommon – I am the only ‘Sarah Duckers’ in the United States! This makes Googling my name easy, and I thought it would be silly to give up that unique name. Also, Mark’s niece is named ‘Sarah Davidson’ and I thought that could get confusing.”

The couple’s sons, Will, 17, and Tommy, 14, both use Davidson as their last name – which “seemed fine and natural that they would both have Mark’s name,” Duckers says.

Not everybody was on board.“My mother really didn’t understand not changing my name because that just wasn’t done in her era. When Will was born, she would introduce me as ‘Sarah Duckers-Davidson,’ and when I mentioned that wasn’t my name, she told me she didn’t want people to think I was an unwed mother! My mother-in-law and some aunts still don’t accept that I haven’t changed my name, so I often get cards and letters addressed to ‘Sarah Davidson.’”

Duckers is among a number of Buzz-resident women we talked with who opted to break with tradition and keep their last names, at least in some form, when they married. 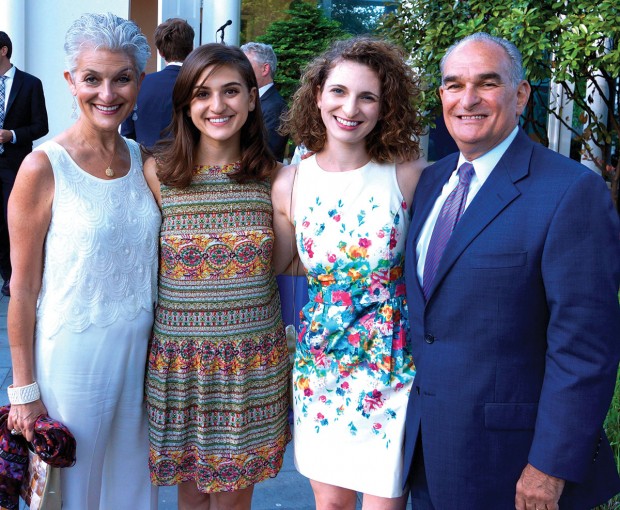 Susan Farb Morris stands with (from left) daughters Shara and Hannah and husband David Morris. Susan combined her maiden name with her husband’s name to create one that worked for her roles as public-relations executive, wife and mother.

Susan Farb Morris, president of Susan Farb Public Relations, had some name adjustments to make when she married her husband, David Morris, in 1984. “When we first got married, I continued to introduce myself to people in person or on the phone as ‘Susan Farb,’” she recalls. “But when I would sign my name, I would use ‘Susan Farb Morris.’ For some reason, I thought it sounded pretentious to use both names when I said them aloud.”

At the onset, Farb Morris used “Farb” for work, and then, when their daughters were born, used “Morris” the rest of the time. “That worked fine until Hannah and Shara got older, and I felt I had two identities: ‘Susan Farb’ at work and ‘Susan Morris’ for playgroup and school. It got confusing when I met other moms or dropped off the dry cleaning, even. What name did I give the shopkeeper?”

She decided to stack the names together, without a hyphen. “For me, I finally came to the realization that I could have the best of both worlds by using both names – in conversation and in writing,” says Farb Morris. “I like acknowledging my maiden name because I’m one of four daughters, so the name ‘Farb’ goes away in my generation. And, it’s a longtime Houston family name that I continue to use with pride.”

Farb Morris adds that her husband and their daughters have supported her choice. “I always thought it was cool that she kept her maiden name for work,” says 26-year-old Shara Morris, a public-radio and podcast producer in Los Angeles. “To me, using her maiden name demonstrated nonconformity … to gender norms. Mom established her career before she met Dad as ‘Susan Farb,’ so why change it entirely? Not to mention that the tradition is founded on women being men’s property. I’m sure Mom having her own name has positively influenced Hannah and me and how we view ourselves as independent women. I’m glad she did it.” Hannah Morris, who works for an Israel-advocacy organization in Washington, D.C., agrees and says,  “Mostly I felt proud because it demonstrated her own identity, and it seemed like the embodiment of the fact that she was a working mom.”

Duckers has a similar view about her own position as a professional attorney, wife and mother. “Mark was actually the first to bring up the topic of whether I would change my name and said he didn’t think I should if I didn’t want to,” she recalls. “I was very glad Mark said that to me because I really didn’t want to change my name. It did show that he thought we were equals and that we both had our own name and identity and that I didn’t have to give up who I was to get married.”

Jordan Magaziner, associate editor of The Buzz Magazines, is about to be celebrate her first wedding anniversary with husband Matthew Steinfeld, an attorney. Magaziner intended to change her last name to Steinfeld right after their March  2015 wedding. “It wasn’t an easy decision to come to, as I really love my last name – Magaziner, perfect for someone who works at a magazine. It wasn’t easy to think about changing my name – my identity. I also liked the idea of sharing the same last name, symbolically, becoming our own family. My husband was completely supportive of me keeping my maiden name – or changing it, whatever I decided to do – but I thought it’d be best for me to change it.”

With honeymoon plane tickets purchased in her maiden name, Magaziner decided to put off switching to Steinfeld. “I wanted to start getting used to the idea of having a new last name, so I changed my name on Facebook, thinking that would help. But it didn’t. I still haven’t legally changed my name! Somehow, the idea of actually, legally, changing it and having a completely new identity has gotten more and more difficult.”

Magaziner says the list of “to do’s” in order to legally change one’s name after the “I do’s” is pretty daunting. Once the wedding certificate is in hand, there are some stops to make: the Social Security office for a new card and the Texas Department of Public Safety for a new driver’s license. Additionally, the name change needs to be updated for so many documents: voter registration card, passport, post office, bank accounts, health, auto and home insurance, doctor’s offices, employers, banks, credit cards, attorney, house of worship, and volunteer and alumni organizations.

These days, anything goes when it comes to playing the name game: Some couples combine their last names, with or without a hyphen, others make new last names out of combined names, and some husbands take their wife’s name.

Davidson, Duckers, Farb Morris and Magaziner all note that the final decision to change – or not change – a last name is purely personal. Davidson adds that one of the perks of being a judge has been the ability to perform marriages. “Every time I perform a wedding I am reminded of the day Sarah and I were married, and it makes me a little happier,” he says. As to what’s in a name, he has some judicial wisdom. “If the name is something the couple wants to share, that is fine. If it is not, that is fine as well. A shared name neither adds nor subtracts from the success of a marriage.”