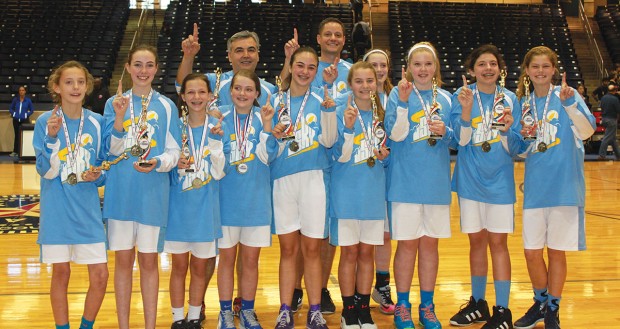 The 11-13 girls Sky team (pictured) won the Spring Branch-Memorial Sports Association gold-division basketball championship. In a game played at the Coleman Coliseum, the Sky beat the Shock, 47-44, in an overtime battle. After being down 10 points early in the fourth quarter, the Shock came back to take the lead with only one minute remaining on the clock. Key shots by the Sky’s Leyla Ertan and Meta Sapien sent the game into overtime, where Sophia Cone shot two important free throws, followed by a three-pointer by Sapien to win the game. The championship Sky players are (bottom row, from left) Kane Kinney, Gabby Rosenwasser, Ellie St. Martin, Ava Picone, Meta Sapien, Kinsey Jacobs, Ellington Whitaker, Sydney Shelton, Sophia Cone and Leyla Ertan, and (top row, from left) coaches Fidel Sapien and Baris Ertan.

An Evening With Christina Wells