Before and after the fire 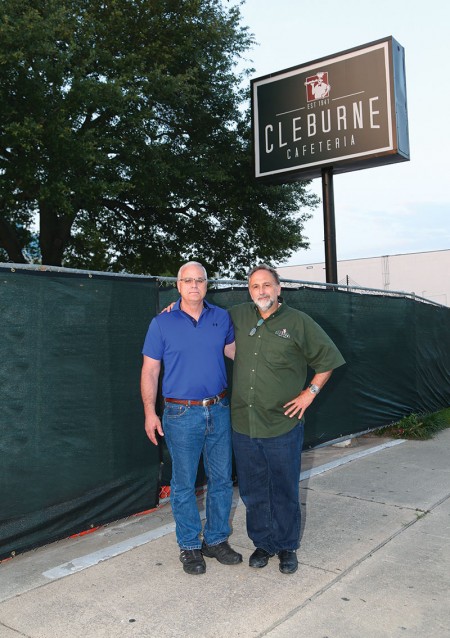 George Mickelis (right) has already begun plans to rebuild his beloved Cleburne Cafeteria, thanks to moral support from thousands of friends and customers, including his dear friend Mike Grivon. (Photo: lawellphoto.com)

By now most Buzz readers likely have heard about the fire that destroyed Cleburne Cafeteria, West U’s landmark restaurant, early the morning of Tuesday, April 26. That Cleburne’s owner, George Mickelis, got a call just after midnight that his restaurant’s smoke alarm was triggered. That firefighters fought for three-plus hours and then, with the ceiling on the verge of collapsing, the fire captain honked his horn, signaling for his team to evacuate. That everyone, thankfully, got out safely.

Nick Mickelis immigrated as a young man to the United States from Greece in 1948 with $2.50 in his pocket and a piece of paper with the word “Houston” written on it. He had family here, a brother, waiting for him. So officials put him on a train to Houston. Nick couldn’t speak English.

By 1952, Nick had married his wife Pat, and, together, they bought Cleburne Cafeteria from “two little old ladies who were tired of running it,” according to son George, who was born in the Mickelis family home over the original cafeteria on Cleburne Street. Nick died in 1989, and Pat, now 91, still eats at the restaurant every day.

Over the years, Cleburne became “more than just a place to eat,” says George’s dear friend Mike Grivon, owner of Swiss Garage. Mike says that George, like his father, “loves being a cafeteria man. He knows all his customers. He serves so many of them six days a week.” Mike himself eats there five days a week. “So I’ve seen a lot of this firsthand.

“I’ve seen people come in wheelchairs and tell George, ‘I wanted to eat at Cleburne one more time.’ I’ve seen George deliver food to people when he’s noticed they haven’t been in for a while. He’ll tell you, ‘I love my customers.’ And he really loves them.

“Years ago I used to tell him, ‘You need to close on Christmas,’” Mike says. But when Nick had the original Cleburne, he went in one Christmas morning to check on something – “an icemaker maybe,” Mike says. A man, alone, knocked on the door and asked Nick if the restaurant was open. He said no, but that he would cook for the man. Twenty minutes later, someone else showed up. Then someone else. Within a few hours Nick was cooking for a handful of people, all with nowhere else to go on Christmas.  From that moment, Nick – and then George – vowed to be open on Christmas.

“I was there around 4 that morning,” says Frank N. Demeris, George’s close friend and owner of Charlie’s Bar-B-Que. “It was already demolished.”

“Then around 7, just when the sun was coming up, here comes Johnny Carrabba, and Gary Moss with Moss Landscaping, and Greg Thompson with Thompson and Hanson. We’re all talking about George’s employees, and that we have to do something. So Johnny says, ‘I’ll take four or five,’ and others were like, ‘I’ll take two or three,’” trying to ensure the employees’ livelihoods. “Shipleys is sending doughnuts and coffee, Buffalo Grille and Vincent Mandola are sending lunches. We’re all restaurants competing for the same dollar. But I saw something I’ve never seen before.”

George says, “I’ve gotten prayers and support from the entire city.” In five days, he received more than 1,385 texts and emails. “I didn’t know that many people knew my number,” he says.

Besides the restaurant itself, George feels the loss of most of his father’s paintings, which hung inside. “When my father lived on the island of Patmos,” George says, “he would make paintbrushes with hair from horse tails and paint from berries. When he could afford paintbrushes, he vowed that he would use his God-given talent to paint.”

Around 70 of Nick’s paintings hung at Cleburne; most were lost. “That’s the tragedy,” Frank says. “We snuck in the building when we got daylight to see what we could save. Most were scorched, or the oil had melted off the canvas.

“But there was one painting of the Virgin Mary and Jesus. It was buried in the corner, protected by a piece of metal. It was wet. Some employees and I worked for three hours to unbury it. It wasn’t scratched, not burned. It just didn’t seem possible, but we saved it.”

With his foundation of support, George promises to rebuild. “I’ve got to keep these employees,” he says, “because I want the same chicken and dumplings some of the same people have been making for 30 years.

“For all these years, people have come to us when they’re down and when they’re happy. We’re here to serve, and we will do it again.”

Editor’s note: At the time of print, the cause of the fire was still under investigation.

The Musical Adventures of Flat Stanley