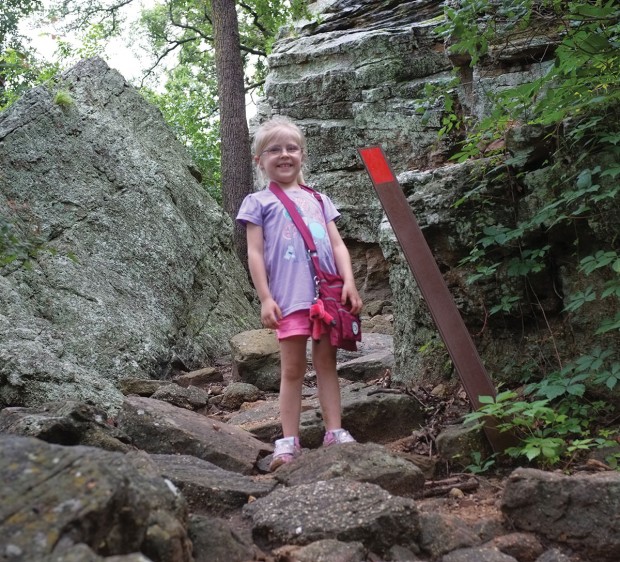 Kyla Bibeau, 6, led the family on a hike through Penitentiary Hollow in Mineral Wells State Park.

Nothing says “road trip” like summertime. And for residents of the Lone Star State, you can drive a thousand miles and never leave home. If you haven’t yet worked one in this summer, there’s still time to pack up the kids and the gear and hit the highway. The Wheelers and the Bibeaus shared a few thousand miles of Texas adventures with us to get those wheels turning.

Margaret and Larry Wheeler consider themselves world travelers, having been to more than 50 countries, but decided on a closer destination for their most recent journey: an epic road trip to West Texas. Margaret, a mixed-media artist and retired art therapist, had wanted to go to Marfa for years. So for her birthday, Larry built an itinerary around that one-stop Soho of the West, creating an eight-day string of destinations.

The Bibeaus – Bonnie, Brian, and their three young daughters – decided on a less far-flung but equally offbeat destination for their most recent road trip: Mineral Wells, for a surprisingly fascinating slice of Texana. And not a family to let moss grow under their wheels, they’ve also done recent road trips to South Padre Island and Rockport.

“We’d never really been to West Texas – we were too busy going all over the world,” said Larry, a retired chemical engineer. “So I designed a road trip that would get us there on roads less traveled.”

Big Bend National Park was high on the priority list, as well as Alpine, a less heralded West Texas cultural oasis and home to some friends they’d wanted to visit.

“So I got on the internet and basically looked for places that I thought would be interesting along the way,” said Larry. He calculated distances and made reservations. “I’m not a guy who likes to leave things to chance.”

They spent the first night in Laredo at the historic La Posada Hotel.

“La Posada was a highlight,” said Margaret, who loved the history and the ambience of the border-town hotel. The Republic of the Rio Grande Museum next door was a little window into the town’s past.

Another highlight was the little 19th century wooden courthouse in Langtry of Judge Roy Bean, the justice of the peace who handed out the law in lawless lands.

“I always wondered why he was the law west of the Pecos River – and we discovered why,” he said.

Over the millennia the river had carved a canyon so deep it was almost impossible to cross, making the other side a favored hideout of criminals and misfits until the first railroad was built. 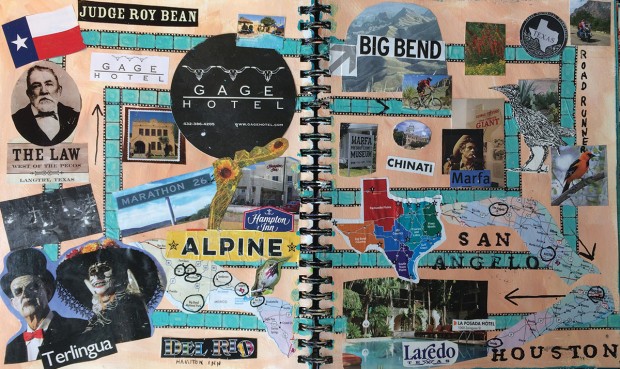 Margaret Wheeler, a mixed media artist, captured the essence of her West Texas journey in an art journal.

From there, they headed north to Marathon, where friends had recommended they stay at the historic Gage Hotel. Margaret discovered the charming Eve’s Garden Organic Bed and Breakfast founded by West U native Kate Thayer, and they vowed to make another West Texas visit so they could try it out.

The next day they did a 200-mile loop from Marathon, through the Big Bend and to Terlingua and back again. Big Bend was vast and beautiful; they drove from one end to the other, a drive of about two hours, and marveled at the complete silence. It’s one of the least visited of the nation’s national parks, so they only encountered a few roadrunners along the way.

Dinner was in Terlingua, a nearly abandoned mining town that’s home to an annual chili cookoff and celebrated in song by Jerry Jeff Walker. Another town with a reputation bigger than its reality, Terlingua is home to a general store, a couple of hotels and a restaurant, and a theater where country and western entertainers fly in for a rare rural performance.

The next day the destination was Alpine, where the niece of a close friend, Jennifer Trammell, had taken up residence as a freelance photographer while her husband coached football at Sul Ross State University.

“It kind of blew us away because we had a totally different picture in our minds of what it was like,” said Margaret. “We felt so sorry for Jennifer; we figured it was a scrubby little town with sagebrush and sand. But it’s the prettiest little town in Texas.”

Tucked in a valley between the Davis and Chisos mountains, it’s a patch of green amid arid surroundings.

As it turned out, they found Alpine much more to their liking than Marfa, where they paid the requisite visits to the Chinati Foundation and the Judd Foundation to see Donald Judd’s minimalist structural art and furniture.

“To me they look like sewer lines or something,” remarked Larry – to which Margaret laughed, but did not disagree.

“I didn’t really care for it either,” she confessed. “It’s kind of like he was a general contractor and he hired people to build his art. I like art that the artist makes.”

They couldn’t get a hotel in Marfa so they ended up driving back to Alpine, where they had a last treat before heading back east: a view of the mysterious Marfa Lights bobbing over the prairie in the distance.

Larry had planned the return route to go through historic San Angelo and the Permian Basin, with a final hurrah in Austin. “Being a guy who worked for an oil company, the Permian Basin is kind of legendary in Texas – a huge oil field that had kind of played out until they discovered fracking. It was booming when we went through there, around McCamey and Big Lake.”

Once a big fan of cruise travel, Larry says the experience was so satisfying that these days he’s more interested in road trips, and is already planning their next one.

“You’re in total control, as opposed to a conventional vacation,” he said. “You’re self-contained, you’re not going to lose your luggage, and you don’t have to go through security –except for the immigration checkpoints.”

Bonnie and Brian Bibeau were looking for a fun Christmas gift for Brian’s dad, Wayne, who loves fossils – a love he has passed on to his family. Finally Bonnie hit on the idea of a trip to Mineral Wells, home to a big fossil park.

So in May they took a three-day weekend and packed up the three little girls, the grandparents and the gear and headed north. The first day they spent at Lake Mineral Wells Lake State Park – hiking along the Penitentiary Hollow route, with its tunnels, caves and beautiful rock formations. Popular with climbers, there are places where they could climb up and look out over the entire park. “We spent the first whole day really enjoying the park; we just let the kids run amok and play,” said Brian.

The next day was slated for their paleontological expedition at Mineral Wells Fossil Park.

“We found everything from plant life to shark teeth to bones – it’s quite an array for our fossil collection,” said Bonnie. “Our kids came home with pockets full of trilobite pieces and things of that nature.”

“I liked playing in the mud,” chimed in little Kyla.

“Oh, yes – it was fun for all,” agreed Brian. “There were frogs to be chased and spiders and mud – just the perfect place for a family to go and get dirty and maybe even learn something new. It was just a ton of fun.”

But next came an unexpected highlight: the town of Mineral Wells itself, with its massive Beaux-Arts Baker Hotel. Opened to great fanfare in 1929 to house the growing numbers of visitors coming to partake of the “Crazy Water,” which was said to have miraculous healing properties, the hulking, abandoned structure seems out of place towering over the sleepy town, a shell of its former bustling self and a testament to another era.

“It was a fabulous trip,” said Brian. “It really was superb to get such a wide variety of experiences and it was really kind of off the beaten trail.”

The trip itself was important for another reason: It gave them a chance to unplug.

“The entire trip for our family was very much a rejection of modern day things,” said Brian. “We were out and about, outside digging in the dirt, out looking at things; we left the technology behind. It hearkened back to what my childhood memories in summer were.”

What great Texas Road Trips has your family taken? Please share in the comments section below or on our Facebook page, or email [email protected].