From Houston to Quebec: The Quebec City Music Festival 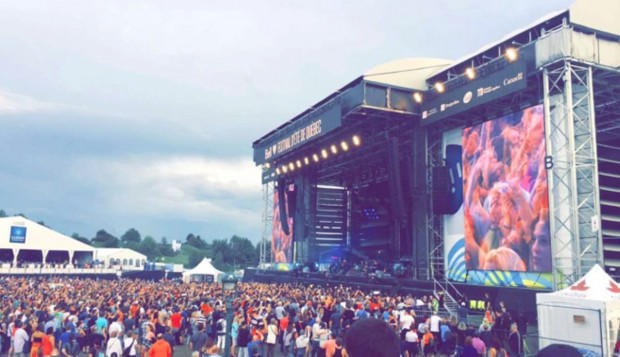 Running. Screaming. Snacking. Enjoying. I can't think of any better verbs to describe what goes on during the Quebec City Music Festival. Set in the charming French-speaking town of Quebec City, the festival draws music and party-lovers alike from all around the world. This annual event lasts 11 days in July, and brings in musical acts of all types: rock (The Red Hot Chili Peppers), metal (Rammstein), alternative (X Ambassadors), pop (Selena Gomez) and more.

This year, for my family summer vacation, we decided to visit the quaint town of Quebec (the only city north of Mexico that is still fortified) to tour the city and check out the Quebec Fest. Although French is the official language in Quebec (and my family speaks Spanish, not French), we found the locals to be very helpful and nice. We felt like we were in France, even though the flight from Houston was only about four hours!

Although there are so many things to see in Quebec, including the old walls of the city, the beautiful harbor and accompanying market, and the cool art exhibitions located around the city, during the days of the festival, the town goes into lockdown. The doors to the festival open every night at 6 p.m. As the clock strikes 6, the people scanning tickets go into high gear, as if it were Armageddon. At 6:01 p.m., general admission festival-goers run as fast as they can to the main stage so that they can be as close as they can to whichever big artist is playing that night. The runners at the front have been waiting at the front gates since 2 pm, and will stop at nothing to get a great spot for the show.

On the other side of the park, festival-goers who have special tickets quickly walk to the pavilion area, where they stake out tables and seats near the bistro for a unique dining AND music experience. By 7 p.m., a huge chunk of the Plains of Abraham (the fields where the festival takes place, and also where important battles between the French and British armies occurred) are packed. Depending on how many acts are playing that night, the first band will saunter on to the big stage anywhere from 6:30-7:30, playing for about an hour. The fans go wild, and the chatter of all the people in the area has everyone, including the performers, bubbling over with excitement and anticipation for the big act that is slated to play that night.

Before 6 p.m., everyone heads over to streets near the Plains and the beautiful Parliament building that are lined with bars and restaurants to grab a quick bite to eat. The energy in the area is electric as Quebec-ers and visitors enjoy the casual French atmosphere. A must-try: the poutine - a Canadian favorite, which consists of French fries, gravy and cheese curd. Sounds a little strange, but it’s a great snack between all the walking you’ll be doing in Quebec. 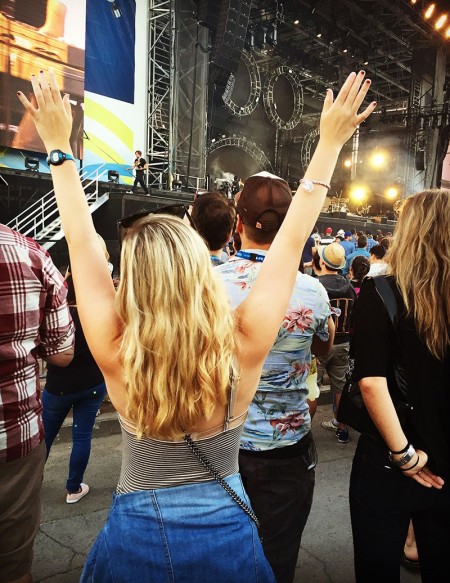 Haley Kurisky cheers for her favorite band, the Red Hot Chili Peppers, on the 10th day of the Quebec City Music Festival.

While I was in Quebec, I got to see two huge acts perform, as well as witness many other smaller bands that played leading up to the bigger performances. The main reason I was so excited about attending the Quebec Fest is because my favorite band, the Red Hot Chili Peppers, were the headlining act on the last Saturday of the festival. On Friday, the day before RHCP, I also got to see Duran Duran, who jumped around on stage as if there were no tomorrow. I didn't think I would make it to Saturday!

At one of the smaller stages, which are set up around the Plains of Abraham and neighboring streets and parks, I discovered one of my new favorite bands. Puggy. I happened to be hanging out with my family at a park, grabbing a drink and a bite to eat, when suddenly, and young and fun three-piece band took the stage nearby. The crowd was dancing and singing along to all the music, so we wandered over. I loved the sound of the band, and subsequently downloaded about eight of their songs to my phone after returning to the hotel. The festival has a cool, casual vibe, which allows concert-goers to really enjoy the music, atmosphere and company of the people around them. After Puggy played, my sister and I were even able to take pictures and talk to them. They said they have friends in Galveston-- who knew?

The festival gates are open to the public during the day, as bands set up and build their stages. On Friday, my dad and I wandered through the grounds and happened to stumble upon the sound check for Brian Ferry, one of the founders of Roxy Music. We saw him run through the majority of his songs for the concert, and cheered after every song (even though we were the only ones watching). During the day in Quebec, the perfect way to spend your time is by taking a food tour. They last up to three hours, and include a guide that walks you around multiple food hotspots in the city for you to try their special delicacies. We got to eat so many good and local things—it was amazing!

Quebec is a hidden gem. With the charming atmosphere of a small French town, Quebec has great food and plenty of things to see from its past as a French- and British-influenced town. Although I don't speak any French, the Quebec natives were helpful and accommodating, giving my family useful advice for places to eat and things to see. The festival is an incredibly unique experience, where you get to feel like a local and also enjoy great acts. I highly recommend the Quebec Fest for anyone who loves music, being happy, or being surrounded by cool and amazing people. No matter how old you are or what you’re interested in, there is a place for you in Quebec and at the Quebec Fest.

See Haley's roundup of live music in Houston this August.