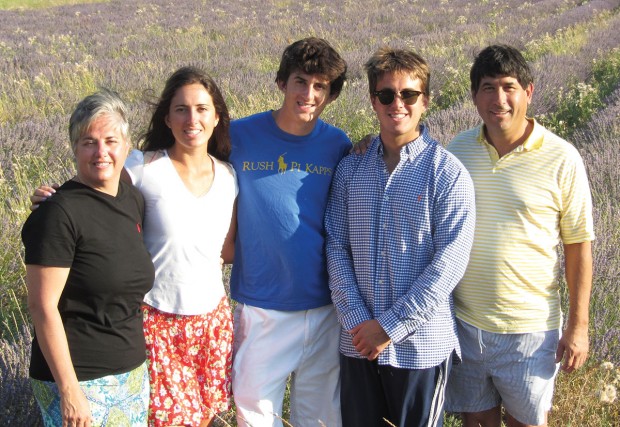 LAVENDER DREAMS One of the family’s surprise trips was to Provence during lavender season. From left: Michelle, Catherine, Alex, John and Hector Herrera.

Lots of dads like to surprise their families, but Hector Herrera has taken a family tradition to a new level. Herrera has planned seven surprise trips to different countries for his family of five – and it hasn’t been easy.

As an anesthesiologist and his hospital’s chief of staff, Herrera’s work involves life-and-death decisions on a regular basis. Fortunately for his family, he’s good at compartmentalizing the work aspect of his life; it’s almost as if he has two personalities, says Michelle.

“If you’d just met him, you’d think he’s very quiet and reserved, but not really knowing what’s going on under there – he’s someone who’s just busting to break loose and have a good time.”

It all started when John, the oldest, graduated from 12th grade. John was an aspiring young golfer, like his sister Catherine. So Hector and Michelle surprised their kids with a trip to St. Andrews, Scotland, the birthplace of golf.

The trip got Hector to thinking. “I really wanted to build it up this time,” he said. The next year, he chose Greece as the destination – Athens, with a tour of the ancient ruins, and a stay on the epically beautiful island of Santorini. He decided it would be fun this time to surprise the whole family, including his wife.

“A lot of this was trying to generate a huge amount of anticipation and excitement. In the past we’d talk about it a lot. But now nobody knew, and it became kind of a big game to try and figure it out.”

Each of his children – John, Catherine and Alex, now 24, 22 and 19, respectively – would approach him independently and try to pry it out of him. “As it got closer, there were hours of questioning: ‘Give me a hint; what’s the weather like?’ That was a big part of leading up to the trip – everyone trying to figure out what we were going to do.”

Catherine looks back with amusement. “Dad would say, ‘Bring your bathing suits, bring shorts you can run around in; we’re going to a place with warm weather.’ So we’d say, ‘OK, Dad,’ and hope we were bringing the right thing.”

Indeed, it wasn’t until they received the boarding passes for the final leg of their trip – at London’s Heathrow Airport – that they finally knew their ultimate destination.

“We got our boarding passes and everyone got a look of, ‘Oh my God, this is crazy – Greece is like ancient times!’” Michelle recalls. “We were so pumped and excited – you don’t know what to expect because you’ve never been there, and your imagination is going crazy.”

It wouldn’t be until later that they learned about Santorini. “To this day my kids swear that’s where they want to go when they retire – it’s so beautiful, and the people are just as beautiful.”

So much excitement can have its downside. Michelle, a former dentist now studying law, wasn’t too sure how much she liked having the tables turned. She’s big on planning, and suddenly she couldn’t.

“Of course it was very sweet and endearing,” she recalled. “He wanted to make it really special, to do something we’d never done before.” But her worries were more basic:  “Am I bringing everything I need for my kids, and if not, can I get it where I’m going?’” On the upside, Michelle says, “we don’t come in with any preconceived notions, because there’s no time for it.” 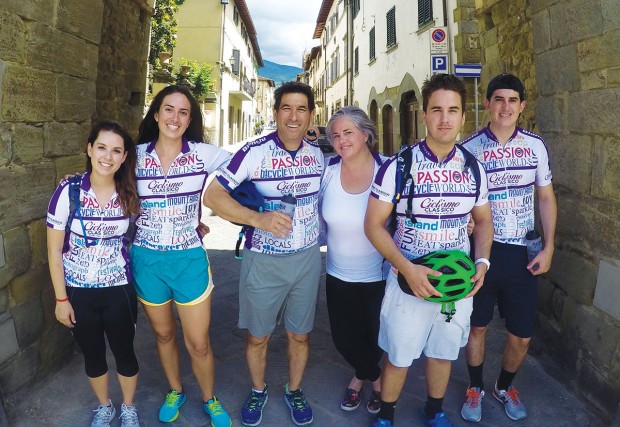 TUSCANY ON TWO WHEELS Jordan Solcher, Catherine Herrera, Hector Herrera, Michelle Herrera, John Herrera and Alex Herrera (from left) are on the way to the village of Loro Ciuffenna. That day the group rode 50 miles, part of it on an old Roman road, and toured an olive oil press.

Catherine, now getting her master’s in accounting, also had reservations. “It was pretty stressful at first; we had no idea where we were going,” she admitted. “We were wondering, ‘Is this going to be a fun trip?’ We were pretty skeptical – but it’s always been a blast.”

The next trip was to Vienna and Berlin. Hector wanted to share all of Europe’s great cities, and these two stood out. “The closer we got, it was just all consuming for them,” he recalls with a mischievous smile. Again, they didn’t know where they were going until the final leg, when he handed them the boarding passes.

Highlights of Vienna included stunning architecture, Wiener schnitzel, strudel. Michelle was enthralled with the international flavor, the beautiful cathedrals, the aura of mystery. Hector was more taken with Berlin, with its World War II history, Checkpoint Charlie and the Berlin Wall.

For a contrast, he decided on something completely different for 2012. He rented a house in the south of France, in the tiny village of Aix-en-Provence.

That was the year, however, that one of his sons discovered the secret. Hector says John hacked his account. Michelle says Hector left a page open on his laptop. Either way, the boys knew, but managed to keep it a secret from their mother.

“That was a precious trip,” recalls Michelle. Renting a house gave them an entirely different experience. Daily rhythms emphasized family time. They’d take turns cooking, cleaning, going on outings to buy food. It became about interacting with the neighbors, following the markets from town to town, soaking up the picturesque countryside. It was like walking in a painting of Paul Cezanne, one of Aix’s more famous residents.

In 2013, Hector doubled down on the secrecy. It was perhaps the most surprising destination of all: Israel. And no one figured it out until they reached the airport in Newark. That’s where they had to go to a separate section of the airport to be interviewed by Israeli security officials.

“Leading up to that trip I couldn’t stop watching the news,” said Hector. “It was June 2013. There was stuff going on every day – it was crazy. But once we were in Israel, we never saw anything, no bombs, no fighting. There were lots of Palestinians around, and everyone was very nice.”

What struck Michelle the most was the resilience of the people. “We were being led around to the most beautiful parts of the city – Tel Aviv, a beautiful city right on the Mediterranean – and I’m like, ‘Oh my God, what happened to that building?’”

“Oh, that’s where a bomb hit,” the guide would say, nonchalantly. “And that’s how it is. They go back to their daily lives. That’s what makes them survivors.”

Paradoxically, Michelle said, she has never felt safer, especially in Jerusalem. “It’s the holiest of holy cities; here you have the merging of the three cultures – Jews, Christians and Muslims – all making a decision to coexist.”

The other surprise, she said, was the kindness they encountered. “That whole thing that Americans aren’t liked, we haven’t seen it,” she said. “All the cultures we encounter are so lovely and inviting.

“You’ll hear so many bad stories about traveling, especially with the crazy world we live in, the tension with other countries, other beliefs – if anything, it has made us want to travel even more, because we realize we have so much more in common than we have differences.”

In 2014, Hector decided on Mallorca, off the coast of Spain. The kids were pushing for a beach destination, and this one had history and culture. Indeed, it had many cultures – just not much of the Spanish one. The island is divided into sections dominated by people from different countries who go to vacation there. Hector rented a house in the German section.

“I would have thought I was on a beach off Germany,” recalls Michelle. “Everyone with blonde hair and fair skin.”

In 2015, Michelle was in summer school, so it wasn’t until this year that Hector was able to surprise his family once again – for a spectacular and perhaps final time. It was becoming increasingly apparent that the kids were now adults who wanted to have more of a say in the destinations and the itineraries.

Still, Hector had one more surprise up his sleeve. This time, he made it a trip that he was sure would delight his adventure-hungry kids and his culture-loving wife.

The weeks leading up to the trip grew increasingly tense as his family members threatened mutiny. He held fast, however, and when they all ended up in Tuscany on a guided cycling tour, all were thrilled.

“This last one was unbelievable,” said Michelle. Along the trail they stumbled by accident on the private resort that had just been created by the designer Ferruccio Ferragamo, scion of the famous shoemaking family. He’d purchased an abandoned estate and turned it into a private resort “that’s just off the charts,” Michelle said. “Il Borro, it’s called, and it is the most gorgeous place I’ve ever seen.”

But the tour itself, with two young Italians, Massimo and GP, or Gian Paolo, as their guides, was what left an indelible mark. By the end of the tour they were like family, said Catherine, and the lessons learned in half a decade of surprise travel were laid in deep.

“All of this at the end of the day has given my children so much,” said Michelle. “They’ve learned a great deal about being with people of other races and cultures – and they realize we can all live together, absolutely.”