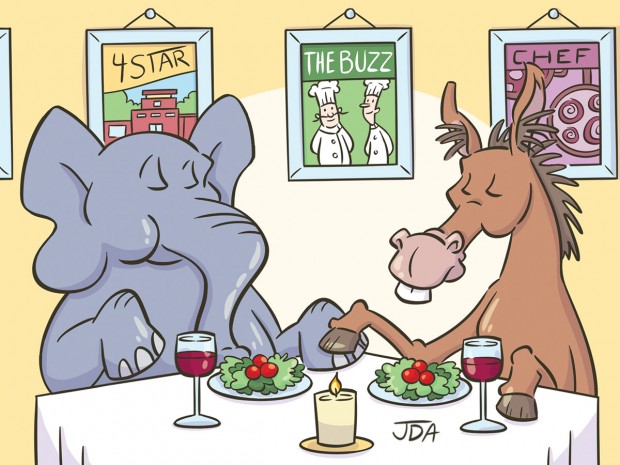 HARMONY AND DISCORD At the end of the day, couples put opposing politics on the back burner in favor of a happy partnership. (Illustration: behance.net/runamokstudios)

It’s hard talking politics with anyone these days. In the midst of a presidential election the likes of which we’ve never seen before, talking about who we’re voting for and why stirs lots of emotions. And talking about issues can be downright dangerous.

So what happens when the person you’re married to – the one you share a home and a life with – doesn’t share your political views?

Dollie and Abe Goren have spent a lifetime figuring it out. The couple, who met while working in a law firm, he as a lawyer, she as the manager of the firm, have been together 35 years, and married for 30 of them. They’ve got two grown daughters, and they actually worked together at the firm for 17 years. “Dollie and I get along fabulously,” Abe says. “We rarely argue.”

The couple has come together on issues that would have been insurmountable for some. Abe grew up in Houston in an Orthodox Jewish family, while Dollie was raised Baptist in Mexia. “The first time I took Abe to Mexia, I think it was a cultural shock,” Dollie says. “My family knew so little about Judaism that before he came, they went to the library to research it.’”

“Growing up, I thought my in-laws would be Davids and Sols,” Abe says. “But I’ve got Billy Bobs and Roy Dons. The way you imagine things is never how they end up.”

The families came to love one another, and the religion question was answered when Dollie converted to Judaism.

But still, one glitch remained. Abe is a staunch Democrat, Dollie a staunch Republican.

“From the beginning, Abe’s been fiercely Democratic,” Dollie says.

“I was more liberal, and she was more conservative,” Abe says. “But neither of us will vote straight ticket. We’ll do a little bit of research and try to vote our conscience.”

That doesn’t mean they’ll agree. “I will tell you that some issues are so difficult,” Abe says. “I can understand where the other side is coming from. But I still think my side is the correct one.”

“Well, the Republicans are late to the party when it comes to global warming,” Dollie concedes.

“Oh they’re still not at the party, baby,” Abe says.

“We agree to listen to each other,” Dollie says.

“We agree to disagree,” Abe says.

Have politics ever come between them? “Never that I recall,” Abe says.

“It’s kind of like when you’re at a dinner party, and they say not to talk about politics or religion,” Dollie says. “When it has come up, we both respect each other’s points of view. If Abe believes strongly, I’m always open to hearing what he has to say.”

She’s apparently not open to yard signs, though. “That’s the one place it gets touchy,” Dollie says, “because I don’t want a yard full of signs.” “Somehow they disappear out of my yard,” Abe says. “I’m not quite sure where they disappear to.”

On second thought, Abe says there’s one more touchy spot in their marriage: “The bigger fight is A&M and UT. My allegiance to UT and hers to A&M has probably caused more discourse and ill will. With politics, I’m not going to convince you, and you’re not going to convince me, so let’s have dinner.”

Another couple whose politics diverge – and who ask to remain anonymous – have also made peace with their differences. The wife, a Democrat from a long line of Democrats, says, “I say we’re in a mixed marriage. I abandon talk of politics because it’s so personal to me, and I know it won’t end well, so I’m out. I want to talk about what we have in common as opposed to what’s divisive or difficult. Loyalty, friendship and humor. Shared values.

“I don’t believe I need to go there with him, because if I believe something politically it doesn’t affect the way we do business as a family,” she says. “We categorically have shared values for that.

“That said, we’ve been together for 30 years, and I can say, ‘You’re driving me crazy, and I’m going to take you down,’ and he can say the same. A great sense of humor – and loyalty – will get you through everything.”

These couples can teach us all something about getting along and respecting each other’s views, whether we’re married or not. But sometimes a sense of humor does trump playing fair. Abe’s last request for this story?