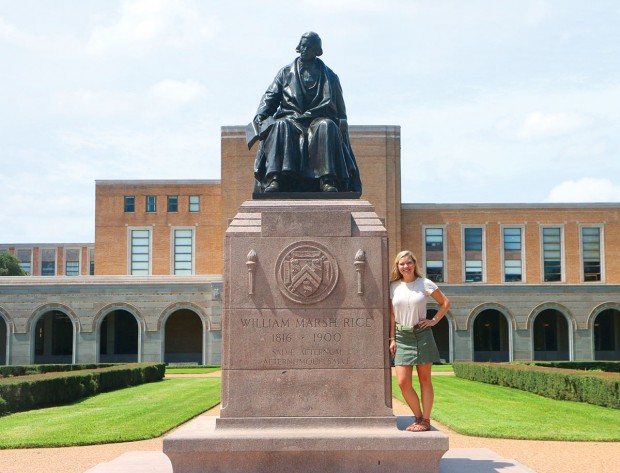 WILLY IS WATCHING Haley Kurisky, this article’s writer and a student at Rice University, stands next to “Willy’s Statue,” where the ashes of the murdered founder of Rice, William Marsh Rice, are buried.

Did you know that Houston is haunted? Or at least parts of it supposedly are. With Halloween around the corner, we thought it was time to revisit the Bayou City’s spooky side.

We talked with Houston historian Sandra Lord, owner of Discover Houston tour company, and Debe Branning, who investigates paranormal activity. They have co-written a book,  A Ghost Walk in the Old Town of Houston, about haunted historical spots in Houston, due out this month. With their help, we have compiled a list of ghostly spots in Houston for you to visit.

Rice University has an intriguing backstory regarding its founding. William Marsh Rice (known as Willy), the founder of the university, put aside his fortune towards Rice’s founding, but was subsequently murdered by his butler. The butler was working in conjunction with Rice’s lawyer to try and change Rice’s will so that the money could be theirs. The plan was thwarted by Rice’s friend, Captain James A. Baker, who recovered the money and put it towards the university. Rice’s ashes are located on campus inside the base of a statue bearing his resemblance in the middle of campus. There haven’t been any reports of ghostly sightings yet, but Rice students say that Willy is always watching.

The Spaghetti Warehouse building downtown, 901 Commerce Street, now houses the Italian restaurant. But it was once a warehouse, specifically for pharmacy items. Paranormal researchers describe this as one of the most fun haunted places to visit in Houston. The legend goes that a pharmacist once fell down an open elevator shaft, dying immediately. His grieving wife died shortly after, and their spirits have been said to haunt the restaurant, rearranging chairs and plates, and leaving restaurant-goers uneasy after feeling cold breezes in random areas of the restaurant.

What’s scarier than a haunted hospital and gravesite? Jefferson Davis Hospital, 1101 Elder Street, and built on top of a cemetery for Confederate soldiers, was remodeled and is now known as the Elder Street Artists Lofts, but once served as a psychiatric ward and juvenile-detention building. Residents report hearing screams and seeing “shadowy figures” on the premises, supposedly haunted by ghosts of soldiers, nurses, and children.

If you’re of drinking age, you might be interested in checking out “the most haunted bar in Houston,” La Carafe, 813 Congress Avenue. It is speculated to be the oldest bar in Houston and is an official Texas Historic Landmark in downtown. The spirit of a longtime bartender for La Carafe, known as Carl, supposedly has been seen on numerous occasions peering out of the second-floor windows at passers-by. In addition, child ghosts have reportedly been seen on the second floor, as well as orbs and glowing lights in the building. Local residents claim that a female ghost wearing a white dress will mess with women visiting the bar, as she is jealous of their beauty.

The last spooky spot we suggest visiting is the Old Downtown Library, also known as the Julia Ideson building, 550 McKinney. Branning says this is one of “the coolest haunted spots in the city.” She says the building hosts a live-in ghost, who often can be heard playing his violin on the top floor of the library. Jacob Frank Cramer, who was found dead in the library, worked as a watchman for the library in the early 1900s. The ghost supposedly has been seen on numerous occasions with the ghost of his dog, Petey, a German shepherd.

If you want a more planned, interactive experience, check out one of the scariest haunted houses in Houston: Nightmare on the Bayou, 1515 Studemont Street. Another haunted house you can go to is Phobia, 5250 South Sam Houston Parkway. Tickets for the houses are around $30, and can be bought in advance online.

You can also go on a haunted tour around the city with Houston Historical Tours. They range in length from one to four hours.

If you’re taking a trip down to Galveston, consider staying at Hotel Galvez – Galveston’s oldest hotel, located on the Seawall. It’s supposed to be one of the most haunted hotels in Texas.