All aboard: travel by train 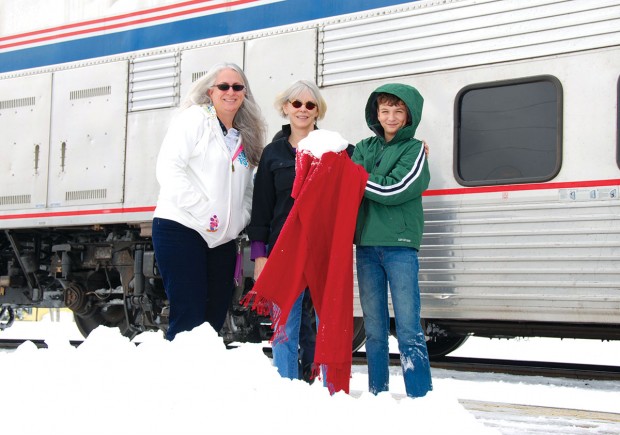 EXCURSION EXPRESS One should always take time on a train trip for a three-minute romp in fresh-fallen snow in Winter Park. From left: Dawn Bloomer, Martha Pope and William Fowler.

Good morning, America, how are you?/Say, don’t you know me? I’m your native son/I’m the train they call the City Of New Orleans/I’ll be gone five hundred miles when the day is done. – Steve Goodman, City of New Orleans

There are few subjects that provoke more nostalgia in the American psyche than trains. From the opening of the B&O Railroad in 1830, to the luxury cars of the Pullman Palace Car Company in the 1860s, to the opening of the West and all it entailed, our railroad history is peopled with heroes like the legendary steel driver John Henry who broke his heart racing the steam drill, and “Casey” Jones, the courageous engineer who gave his life to save his passengers.

Train travel is still an excellent option for those looking for different landscapes and different ways of moving through them. Three readers shared some splendid railway adventures with us recently and confirmed that, while the golden era of trains in the Unites States may have come and gone, that doesn’t mean we don’t still love them.

The Bloomer family decided on a deep immersion, taking the California Zephyr from its starting point in Chicago to its terminus in San Francisco. The Vines and Lu families spent an unforgettable half-day on a train through the Alaska wilderness. And Rodney Kapp found his way home from Tucson, where he dropped off his daughter and her car at the start of the school year, via an Amtrak route.

Normally Dawn plans the travel in the Bloomer family. This time, it was husband Kevin. He read an article about the best American train trips and the idea began to grow.

“This was the one trip where he said, ‘This is what I want to do,’” said Dawn. “This was not him along for the ride.”

After some research, they settled on the top-rated California Zephyr – a dramatic three-day, 2,348-mile journey that traverses the route many settlers took west. They would be looking down on the Mile-High City, plowing through the Rockies along the Colorado River, crossing the Sierra Nevada through Donner Pass, riding alongside grazing antelope and flying eagles, passing through grand canyons that displayed the many-colored layers of geologic history, all from the comfort of their own private suite.

Dawn contacted a family friend, Martha Pope, who flew in from Washington, D.C. to join them, and so, with their 12-year-old son William, they were four. They booked two connecting rooms, with sofas that fold out into beds and wall-sized windows, for one week in March.

They flew into Chicago the night before for the 2 p.m. departure. By the time they got settled, it was time to head to the dining car. Meals were an experience in themselves, dining on first-rate cuisine alongside the wide panoramas unfolding around them.

“You get to see parts of the country at ground level you couldn’t see any other way… as pristine as they were hundreds of years ago,” said Dawn. “The scenery is truly spectacular; the pictures don’t do it justice.”

One of the highlights was fresh snow in Winter Park that had just fallen as they rolled into the station. They had just enough time to step out and grab a few handfuls of the clean white powder and snap a photo and then they were off, watching the white-blanketed trees and mountains roll by.

“They would stop literally for 5 minutes; it was enough to get some fresh air, but you would never leave the area of the train,” said Dawn. “There’s two horn blasts and you have about 30 seconds to get on board.”

They brought their iPads and pre-loaded them with movies and reading material, since the train does not have wifi – actually an advantage, Dawn said, since it gave them some time to unplug.

“We brought books, we brought games – but all you really want to do is look out the window and watch the world go by.”

The view from their suite was excellent, but the observation room upstairs was even better, with a domed glass roof and a 360-degree view of the stunning landscapes that were unfolding before them.

“It’s transfixing being in that car and looking out the window,” said Dawn.

Sleeping was the only part that was less than excellent, Dawn reported. The temperature control didn’t work and the top bunk was uncomfortably warm, prompting her to climb down and join her husband in his tiny bunk – but there really wasn’t room.

“It was miserable night’s sleep,” she confessed. “These are not enjoyable quarters…. But you’re not there for a luxurious sleep, you’re there for the adventure and the scenery, and those things were all very, very good. Even though we didn’t get a good night’s sleep, we would do it again, for sure.” 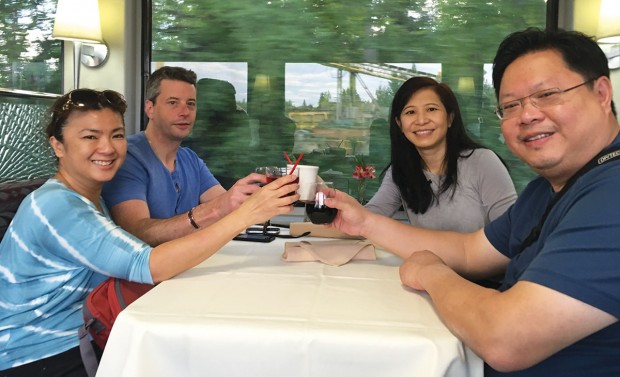 LUXURY ON THE RAILS This train trip included a delicious lunch with excellent company and views of the Alaskan wilderness. From left: Bee Vines, John Vines, Lily Chen and Shi-Tze Lu.

A half-day train ride was one of the highlights in a two-week trip to Alaska for Bee Vines, husband John and their three sons, Logan, Atticus and Paden. The Vines teamed up with their friends, Lily Chen and Shi-tze Lu, and their two children, Meghan and Cameron.

“If you read all the reviews, the train ride is a must do – it’s so beautiful, the view is just amazing,” said Bee.

A friend had been talking to them about the melting of the glaciers due to global warming – “When you go, they say, ‘This is where the glacier was 100 years ago, and now it’s here.’ It just keeps getting shorter and shorter – and we wanted to get there before it’s too late.”

They flew to Anchorage, where they rented a car and spent a few days in Denali National Park, then caught the Coastal Classic Railroad to Seward.

They had to be at the train station before 6 a.m. to check in for the 6:45 departure. “It’s like an airplane; they check in your luggage first, and then you wait for them to call you,” said Bee. “Then they say, ‘All aboard!’ and you see the captain and the conductor with his uniform. Everyone is excited – it was just like in a movie.”

Upon leaving Anchorage, the train winds along Turnagain Arm, where the soaring Chugach Mountains meet the sea. The train stops in the town of Girdwood before turning off into the wilderness, far from roads and civilization.

The double-decker train with its cushy seats, glass walls and glass dome made for a splendid ride. Glaciers, mountains, rivers and lakes, wildlife – they all rolled by within easy camera range. They saw bald eagles and a family of mountain goats, a mother and her babies. And for even better photos, one could wander out to the caboose, with its open-air access to all that surrounded them.

A bartender was there to prepare mixed drinks, wine, beer, or soft drinks for the kids. And at lunchtime all were invited to come downstairs to the dining car — Bee chose the salmon, and pronounced it excellent.

“It’s a great experience. Because in Alaska there are a lot of places you have to take a train to enjoy the view. It’s almost like there is no other option.”

Rodney Kapp’s daughter Holly was off to college in Tucson, Ariz., and they’d gotten her a car in Houston. Rodney didn’t want her to drive the distance alone, so he accompanied her.

“It was hard to get a feel for when I could fly back home, and once we figured it out the airfares were astronomical,” said Rodney. Holly would have had to drive him to the airport in Phoenix and it would have cost more than $500. Meanwhile, there was a lovely train station in Tucson right nearby.

“It was something I kind of wanted to do,” he said. He’d never been on a train before. He got a sleeper car for the 25-hour ride.

“I was by myself so there were some lonely times, but I actually enjoyed it,” he said. “You go through a lot of small towns, and it’s pretty clear that those towns at one point were probably more vibrant than they are now. And I’m thinking it’s because people don’t travel by train anymore. It’s kind of sad to see how some of the cities look like they’re almost ghost towns.”

The food was “pretty good,” he said. “I was pleased.” The thing that was memorable about dinner was the assigned seating.

“The first meal I ate was lunch. He said, ‘OK, take a seat right there.’ I said (to myself), ‘There are two people sitting there — who are they?’”

“Not a word was said between the four of us. At dinner it was much different. They sat me with two other guys, and the three of us just talked the whole time.”

Rodney’s experience with the sleeping car, unlike that of the Bloomers, was comfortable; his only complaint was the whistle, which sounded every time they approached a town.  “It’s a really pretty drive when you get to West Texas and on to Arizona; there’s a lot of neat places, a lot of beautiful scenery.”

Rates for train travel vary, but here are some examples, based on the trips we wrote about here:

Amtrak’s Sunset Limited Route (New Orleans-San Antonio-Los Angeles) – Rodney took the Tucson to Houston trip: $127 for a seat in coach, $309 for a two-bed Superliner Roomette, $491 for a four-bed Family Bedroom, $747 for a two-bed Superliner Bedroom that includes a private toilet and shower, a sofa and chair. All meals are included with the sleeper room options. Coach seats are reclining, and food can be purchased separately.

Amtrak’s California Zephyr Route (Chicago-San Francisco): Coach seats start at $134. Superliner roomettes, $587; Family Bedroom, $1,488; Superliner Bedroom, $1796. You can also get a Superliner Bedroom Suite, which is what the Bloomers did: two Superliner Bedrooms that connect. By leaving in the middle of the week, they were able to get the second room practically free; various discounts and deals are available on the Amtrak site. See www.amtrak.com for routes and rates, special deals, planning maps, and even a virtual tour of the train.

To get you started dreaming, check out the Top 10 North American Train Trips from National Geographic Travel. Or, why limit yourself? World’s 15 Most Scenic Train Rides, from Fodor’s.