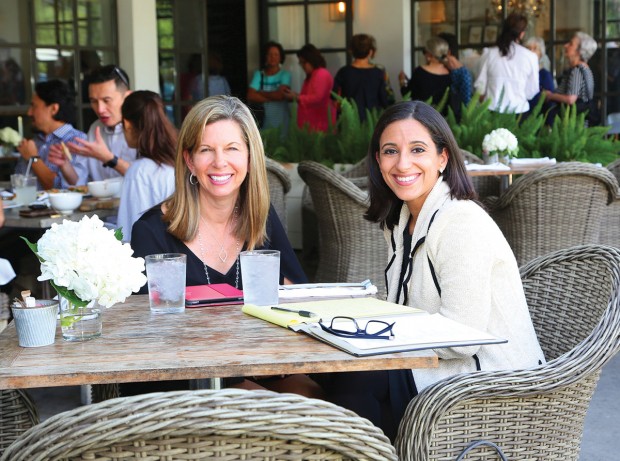 STAYING SAFE Buzz resident Gail Stalarow (at left) was robbed at gunpoint and is working with Rania Mankarious (at right) to share holiday-season safety tips. Mankarious is executive director of Crime Stoppers of Houston. (Photo: lawellphoto.com)

Rania Mankarious is executive director of Crime Stoppers of Houston and a blogger for thebuzzmagazines.com. This month, she shares holiday-season safety tips.

I love this time of year. But consider. You are busier than normal. You will spend more than normal, which means you have credit cards and probably more cash in your wallet.

I don’t want you to be a victim, but you know who else doesn’t? Buzz resident Gail Stalarow, a vice president and financial advisor at Morgan Stanley. This April, Gail was robbed at gunpoint – in daylight – at a Meyerland-area shopping center.

“I just pulled into the spot, ready to get out, opened the door, and there was a thief holding a gun,” Gail said. “The second I opened the door, she was there. And she demanded everything.”

The robber held a gun to Gail’s stomach, took her purse (with keys, wallet and phone), watch, wedding ring and mother-in-law’s wedding ring – which, thanks in part to Gail’s detective work, was eventually recovered, along with the watch.

Gail and I are teaming up to make sure all of you take steps to make yourself less a target.

Think concentration, not location. In Gail’s case, she parked in the first row, right at the strip center, but off to the side and in a less concentrated area. Now, when Gail parks, she doesn’t care about a shorter walk but seeks to make herself a less desirable target by parking in a busy part of the lot filled with other cars, pedestrians and good lighting.

The way you pull in matters. In Gail’s case, she pulled in nose first. The robber easily creeped up to Gail’s driver-side door, coming from the parking lot, without being noticed by others. As the door opened, the criminal slid in, and the door blocked the view from others. Gail feels that had she pulled in back first, it would have made her car a less desirable target. The criminal would have had to walk to the door from the store-side front. As the door opened, it would allow full view for those walking into and out of stores. Think about where you have more visibility when you open your door.

Think about what you wear when you shop. Intentionally think through the jewelry, emotionally priceless and designer items you are wearing. The more you wear, the higher value your items appear, the more you have to lose and the greater target you become. Keep a journal with photos of your jewelry at home.

The phone issue. Gail said many assumed she was distracted by her phone, but she wasn’t on it. Beyond that, she doesn’t feel like being on your phone automatically makes you a target. I agree, as long as you are attentive, making eye contact with others and remain aware of where you currently are as opposed to being lost in conversation.

Walk intentionally. Shop in peak hours. Don’t be paranoid, but be vigilant. Walk with focus, make eye contact, be aware of your surroundings, hold your purse close to you and keep it closed. Try to shop during daylight. If at night, ask if personnel or security can walk you out. In some cases, I have purposely waited for another shopper to exit, so there was someone else with me walking out. Criminals want easy targets.

What if the unthinkable happens?

Stay calm. Remember everything. Gail made a point to look at her robber’s face, when it was safe to do so. She stayed quietly in her car until the woman walked away, but she watched the whole time. Gail was able to describe the assailant and tell police which way she exited the parking lot.

Know what’s in your wallet. In an effort to contact all the necessary people and companies, you need to know what was in your wallet. Make copies of everything, including your license, and keep those copies in a safe at home.

Immediately surround yourself with good people. Call police immediately and allow yourself to get support from your family and friends. This is nothing to be ashamed of or feel guilty for.

Safely help law enforcement. Gail worked with law enforcement to solve her own case. She canceled all credit cards but mistakenly missed one. That said, purchases on that one card caused her to call the credit-card company and learn where the criminal was using the card. She and the law-enforcement investigator got camera footage, and Gail pointed out the robber in the video. The suspect was arrested and put in jail awaiting trial. It turned out the suspect had a male counterpart tasked with selling Gail’s items to a pawn shop. An anonymous tip to Crime Stoppers assisted in the arrest of that person.

Shop, live and enjoy this wonderful time. Just do it all with vigilance.

Editor’s Note: Rania Mankarious shares safety tips and perspectives on what’s going on in the news every Sunday morning at Sunday Mornings With Rania.