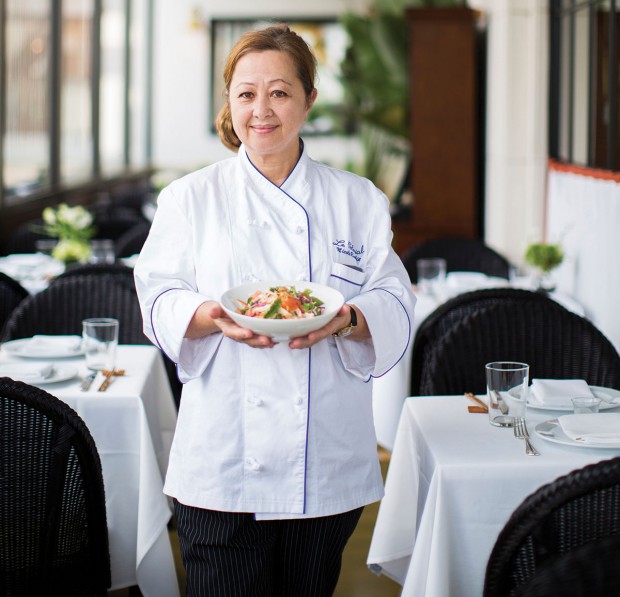 NICOLE ROUTHIER Le Colonial's Nicole Routhier, who is French-Vietnamese, is known for her sauces and her award-winning book, The Foods of Vietnam. (Photo: Julie Soefer Photography)

Find out about your favorite chefs, and where they like to eat, in our Chef’s Corner column. This month, restaurant writer Dai Huynh interviews chef Nicole Routhier.

French-Vietnamese Nicole is very aware that Texas has the second largest Vietnamese population after California. Here, you can’t fudge. Too many people know it. “In a way, I’m a traditionalist,” says the chef. “I like to respect my roots. It’s important because without it, we wouldn’t have Vietnamese cuisine. I like the flavors to be as authentic as possible, but if there is room for improvement, I’m going to take that opportunity to tweak it a little. Why not, right?”

The elevated food presentation complements the old-world elegance of 6-month-old Le Colonial,  gleaming with polished wood and verdant with towering palm fronds and banana plants. The scene at 4444 Westheimer harkens to a languid French colonial era of sitting rooms lined with chinoiserie furniture, silk and men in white linen. Nicole’s menu, however, is anything but staid.

Working closely with executive chef Dan Nguyen, she has updated dishes that she created for the opening of the original Le Colonial in New York 24 years ago. And while she may substitute salmon for the traditional catfish, or even add a dash of local flavor, like tossing Texas grapefruit into the goi ga chicken-and-cabbage slaw, the vibrant essence of Southeast Asia remains intact.

Like French cooking, which Vietnamese cooks heavily borrowed from for more than half a century, sauces make or break a chef. Here, Nicole hasn’t dumbed down her sauces, unlike many Vietnamese restaurants vying for a wider audience. Her vivid dipping sauce for the pork-and-shrimp egg rolls that legendary food editor Craig Claiborne praised is a vivid sing-song of sweet and sour fish sauce infused with fresh lime juice instead of the monotone white vinegar that most Vietnamese restaurants across the United States have come to rely on to cut costs and labor.

The success of the first Le Colonial led to a Chicago location in 1996, which Nicole also helped to open. A year later, Nicole left all that behind to relocate to Houston with her husband, Anthony Laudin.

She settled into teaching classes at Sur La Table and Central Market while stepping closer to  retirement – until one day, when the 60-year-old chef was persuaded back into the commercial kitchen by Le Colonial founder Rick Wahlstedt and partner Joe King. We caught up with Nicole on a recent afternoon as she sat in quiet corner of the restaurant, sampling a variety of her top sellers. She does this occasionally on a whim to gauge quality and consistency. In between bites, she recounted how crispy fried spring rolls made her famous and led to her influential The Foods of Vietnam. 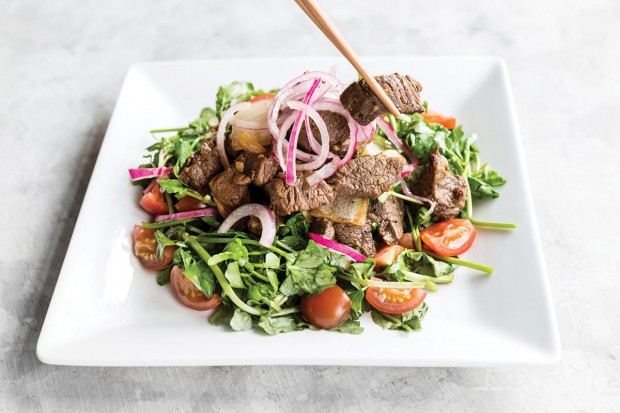 What prompted you to write your first book, which won all sorts of awards, including the Julia Child Award for Best American Cookbook from the International Association of Culinary Professionals?

It took me three years to finish The Foods of Vietnam. I never wrote in my life, but it was a labor of love. I was in my late 20s and about to graduate from the Culinary Institute of America in Hyde Park. At about the same time, New York Times food editor Craig Claiborne wrote an article about the lack of authenticity in Asian cuisines, particularly Vietnamese. He wrote about how much he loved Vietnam, and the foods were so great, he could never forget the flavors. It bothered me so much that I wrote him a letter. I thought, “I really wish he could taste my food.”

He responded and invited you to cook at his home in the Hamptons. He also invited chef Jacques Pépin.

It was a good thing I didn’t know that Jacques Pépin was coming. I was already nervous. Craig had decided to use my dinner as the basis for an article. He didn’t know what he was going to write, but he made me promise to include cha gio. He had been dreaming of the fried spring rolls he had in Vietnam. I thought, “My mom makes a mean cha gio, so I’m going to make a mean cha gio.” It included crab, chicken and shrimp, and I use Vietnamese rice paper, not the Chinese wrapper.

When I laid out the meal, he zeroed in on the spring roll. He would eat it, stone face. I couldn’t tell if he was enjoying his food or not. Meanwhile, Jacques Pépin and the Italian countess were saying, “Wow, this is good. Fantastic.” Craig followed up with a few questions and that was it; I went home.

His article on your banquet came out two weeks later. He praised your cha gio and described your shrimp soup as having exceptional texture and flavor, containing fresh slender bamboo shoots.

The article came out, and I had agents and editors urging me to write a Vietnamese cookbook. The thought never entered my mind until then. I thought people write books only after they retired. But then I realized that for me, the book was about keeping my heritage alive. You see I had lost my mother so young, and I felt I never had the chance to give back to her. She had sacrificed so much for me and my sister. So I realized that it was never too soon or too late to start such a thing. In my way, the book was my gift to her, for all that she had given and taught me.

Many people are familiar with Vietnamese food. But what about when the book was published in 1989?

That was another reason I wanted to write the book. Back then, when you mentioned Vietnamese food, it was, “Oh is that like Chinese?” I would spend hours explaining that it was not.

Vietnamese New Year coincides with Chinese New Year on January 27. Will you have a special menu?

I’m working on that right now, and I’m always open to ideas. What do you think I should have  on the menu?

Yes, maybe in the form of tamale or, even better, fried lightly until crispy on the outside and serve with homemade pickles. You know we also make excellent beef pho soup here. We serve it as an appetizer here, and we simmer the broth for hours with tons of bones and oxtail. I’m thinking of maybe shredding the oxtail and making fried oxtail dumplings for Vietnamese New Year.

That sounds terrific. Speaking of delicious food. Where do you and your husband go to eat these days?

For French, another food I can’t go a month without, my favorite is Artisans (3201 Louisiana Street). I go for the bouillabaisse. It’s hard to find good bouillabaisse, and Artisans’ version is very good. For special occasions, they have wonderful foie gras. Almost everything on the menu is good.

On my days off, it’s a no brainer. I love Chinese food. I also want something I don’t have to think too much about. A favorite go-to spot is Mein Restaurant (9630 Clarewood Drive, Suite A13) for Cantonese. Try their pan-fried dumplings. They’re really good, along with their honey-roasted pork.