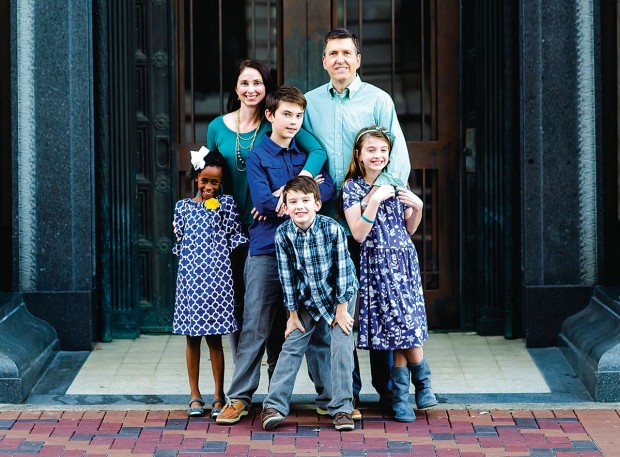 FOR THE KIDS Allison Hart, who advocates for children in foster care, and her husband Wes have four children: (from left) Charlotte, Clint, Cade and Callie. (Photo: Jasmine Chen)

A few years ago in southwest Houston, Child Protective Services removed four siblings – ages 2, 4, 6 and 7 – from the care of their parents. The oldest had missed 53 days of school, triggering a CPS investigation. CPS called the excessive absences a sign of child neglect and placed the four children in the temporary care of a local relative.

At 1:30 the following afternoon, an initial court hearing took place. A CPS caseworker, an attorney for the parents, an attorney for the children and a presiding judge would ultimately decide on a path to healing for the family through a legal process that would last at least 12 months. In this case – and others when the case is nuanced or tricky – the judge makes a special request:

“Appoint a child advocate to this case.”

The child advocate appointed was Bellaire resident Allison Hart. She has served 16 children in seven cases as a volunteer for Child Advocates, Inc. The non-profit’s mission is to break the cycle of child abuse by mobilizing court-appointed volunteers to speak on behalf of children in the foster-care system.

Allison signed on for volunteer orientation and the 30-hour online training course in 2002. “I just got so frustrated reading the newspaper and thought, somebody needs to do something.” But it wasn’t until the Houston Marathon that she made the commitment to get involved. “Somehow I found time to train for this marathon, so I ought to find the time for this.”

With Allison on the case as an advocate, she and the Child Advocates supervising coordinator made their first visit to the four children. Their first impressions were not good, and a few more visits revealed that one of the children had lost a considerable amount of weight and another had been to the ER.

“A lot of things didn’t add up,” said Allison.

They attempted to contact CPS to remove the children, but CPS was slow to return their emails and phone calls. “It’s just such an overburdened system…. It’s not uncommon to call and their voice mailbox is full.”

It wasn’t until they visited again, this time with the attorney representing the children, that they had success. Two days before a scheduled court hearing, CPS removed the children from the home. “I think if Child Advocates had not been on the case,” said Allison, “the children may not have been removed at all.”

There is a need in Houston for more child advocates. Each year, the city averages over 4,000 children in the foster-care system, and child advocates, because of volunteer shortfalls, serve about half.

Volunteering inside a legal process can feel intimidating, but Allison said people need not feel discouraged from getting involved. “People often think that I must have a legal or social-work background to do this work, but just by being a concerned person, I know my role with Child Advocates makes an impact.”

In the end, the parents were able to earn back their children, and the case had a happy ending. Child Advocates helped the parents with commonplace details like getting bunk beds and more stubborn problems, like the tenacious case of head lice that was keeping the kids home from school and the start of all the trouble for the family. “I think sometimes it’s a relational poverty we don’t often think about,” said Allison. “I see it with a lot of families that don’t have safety nets or support when something difficult happens.”

As a mom to three biological children and one adopted child, Allison’s mission to serve these families is personal. “What I learned from adopting my daughter has given me an even bigger heart for preserving birth parents if at all possible.”  Allison and her husband, Wes, adopted their daughter from Ethiopia at the age of 3. “My daughter lost her first family – it’s a loss she’ll have her whole life.  And while I’m thankful she’s part of our family, I wish someone could have intervened to keep her from experiencing that loss.”

Allison hopes to be that person for other kids. “My role is to advocate for the best interest of the child. I really enjoy that because at court hearings I can speak directly from my conscience on whether parents have done everything the court has asked toward earning back their children. Sometimes, I have to say the parents are not ready, but other times I get to champion the effort parents have made.”

Allison hopes her volunteerism inspires her own kids to serve the community. “I think sometimes we just cater so much, and I think it’s good for my family to sacrifice in this way because they know I’m going to visit kids who maybe don’t have anybody who is concerned about them. It helps put things in perspective.”