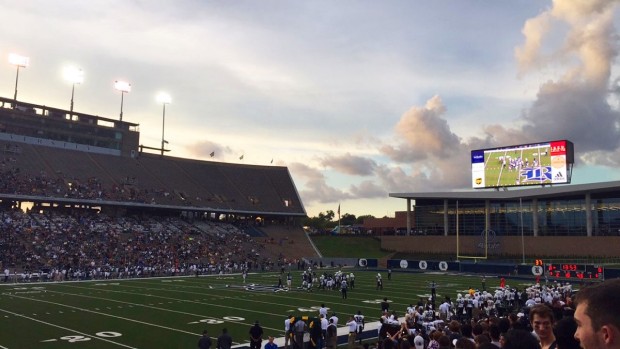 The Atlanta Falcons will practice at the Rice University football stadium in preparation for Super Bowl LI.

Earlier this week, Rice students found out that the Atlanta Falcons, one of the teams playing in Super Bowl LI on Feb. 5, will be practicing at the Rice University football stadium in preparation for the game. This is obviously exciting news as anticipation builds with fans coming into town and the city getting ready for the game. Rice students should be happy to know that the head of the Super Bowl Host Committee for Houston this year is James A. Baker III, who, in addition to being the Secretary of State under President George H.W. Bush, is the grandson of Captain James A. Baker, whom Baker College at Rice is named after, and who saved William Marsh Rice’s fortune so that Rice University could be founded.

In addition, it was announced that the New England Patriots would be practicing at the University of Houston’s football stadium and practice fields. Caroline Funderburk, a student at UH, says, “It is so exciting to think that the Patriots, four-time Super Bowl winners and the team with probably the most famous quarterback in the country right now will be practicing on our field!"

This year, the Super Bowl committee has done a great job of including students in its process. Taylor Scott, a freshman at Rice, has been interning with the Houston Super Bowl Host Committee since September and has “had the chance to work in two departments (Operations and Logistics and Community Relations).” She says they’ve given her “a lot of responsibility and freedom to work on numerous projects,” and she feels really fortunate to have been allowed this type of experience, especially since “I'm only a freshman at Rice. It is certainly going to be very exciting to see the plans we've been working hard on for months come into action in the next week and a half!”

Although it may be tough to get tickets to the game as students (they start at $2599), the game’s location at NRG Stadium couldn’t be better for students in Houston. Discovery Green will be hosting events and concerts all week leading up to the Super Bowl in a festival-type setup, called Super Bowl LIVE. There will be free food from food trucks, music and games for people of all ages. Performers include Solange, Leon Bridges, ZZ Top, Gary Clark Jr., Young Mammals, Lecrae and Blue October.

In addition, Sam Hunt, the Chainsmokers, Bruno Mars and Taylor Swift are each playing one night at a three-story collapsible nightclub entertainment center called "Club Nomadic" that will be set up right outside downtown. Tickets can be purchased on Ticketmaster’s website.

If you didn’t manage to score tickets to the Super Bowl, there are watch parties going on all across the city. Bar Sports, The Maple Leaf Pub, Lone Star Ice House and Doc’s Bar & Grill are among the long list of bars that are hosting watch parties with special drink and food deals. The game will be aired on Fox. Luke Bryan is set to sing the national anthem at the game, and Lady Gaga will be performing at the halftime show.

See more on Houstonians’ getting excited for Super Bowl and comment below to share what you’re most looking forward to during Super Bowl LI.