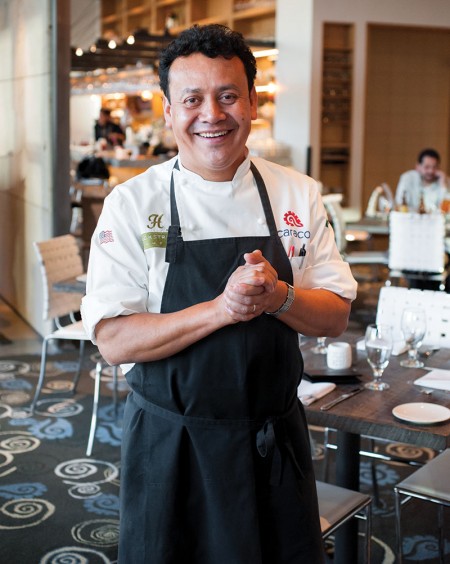 Find out about your favorite chefs, and where they like to eat, in our Chef’s Corner column. This month, restaurant writer Dai Huynh interviews chef Hugo Ortega.

“Hello,” said Hugo Ortega, in his soft accent. “Can you hear me? I’m at Hugo’s Cocina in the airport. We’re getting ready to open the restaurant in Terminal D.”

It’s been 15 years since I spoke to the 52 year old at length. The last time we chit-chatted for more than a few minutes was in 2002, when he opened Hugo’s (1600 Westheimer). For weeks, I followed him, scribbling down the tale of a 19 year old who illegally crossed the U.S. border on a train carrying coal in 1984.

With 600 pesos, he followed his cousin, David, to Houston, sleeping in an abandoned grocery store until one fortuitous day when he timidly approached Tracy Vaught for a job at Backstreet Cafe (1103 Shepherd Drive). The Mexico City-born chef worked his way up from cheese slicer to dishwasher to executive chef. He also fell in love. Tracy and Hugo married on the front yard of her River Oaks family home in 1994. Daughter Sophia arrived three years later.

I have eavesdropped on young Latin chefs speaking in awe of Hugo Ortega. He epitomizes hope for them because if a mild-mannered Mexican chef with brown puppy eyes can achieve the American Dream, they can, too.

In 2011, the prestigious Houston Culinary Awards bestowed on him the title of Chef of the Year, and for the fifth time, in 2016, Hugo was a finalist for the James Beard Best Chef Southwest Award.

In a fast-paced city where chefs come and go, Hugo’s star continues to shine. This year, Hugo opened not one, but two restaurants: the 120-seat Hugo’s Cocina at Bush Intercontinental Airport and Xochi at the new Marriott Marquis Houston (1777 Walker Street). Xochi pays homage to Hugo’s beloved cuisine of Oaxaca, a remote state in southern Mexico.

This is my tribute to one of the greatest local cuisines of Mexico. I just hope it’s not too ethnic for travelers, but if that is the case, then I will be there to explain what it is because I hope with all my heart they will be happy with it.

What does “Xochi” mean?

It means “beautiful flower.” It’s short for “Xochitl,” the goddess of flowers.

How did you come up with the concept for this restaurant?

Right after we opened Hugo’s, a good friend, Jose Leyva, started an import company, bringing products from Oaxaca. It is a special place, with a wonderful spirit. You know, Oaxaca is the richest land in all of Mexico, and the poorest, too. It’s a poor state, the poorest, but it is so rich in what it can give to the world, not only Mexico – the corn, the chocolate, the coffee, the mezcal.

You once told me about a fantastic food festival in the colonial city of Oaxaca?

Yes, about three, four years ago, I went to El Saber del Sabor and had an incredible time. Chefs from all corners of Oaxaca bring their foods. It was the most flavorful food I’ve ever experienced in my life.

At Hugo’s, you introduced the Oaxaqueños tradition of fried grasshoppers, which taste like popcorn, but better. What will you introduce at Xochi?

The grasshopper has been iconic for Hugo’s, but in Oaxaca, it is just a midday snack to calm the appetite. I’m happy that Houstonians have enjoyed it. You know, I have a new insect: chicatana. They grind these flying ants up to make a paste for mole and salsa.

Oaxaca is known as the land of the seven moles. Will you be serving different moles [sauces]?

I’ll serve lighter moles made with fruits in the summertime and heavier, more dense ones, like mole negro, in the winter. I also want to introduce new herbs, like poleo, which has a kind of minty flavor, but very soft. It goes  nicely in black beans and desserts. Pitonia is another herb. The essence of pitonia is so inviting, so fragrant. I’ll put it on ice cream or mole, or to flavor beans.

Which restaurant is a must-dine when visiting Oaxaca City?

You’ve got to try Origen. The menu is very seasonal. Now, I have to tell you,  a year ago, Tracy and I invested in Origen. I was so impressed by the chef, Rodolfo Castellanos. I wanted to really learn about Oaxacan cuisine; it was my continuing education. And you know what? Last year, Rodolfo won the first season of Univision’s Top Chef Mexico. He became an instant celebrity overnight.