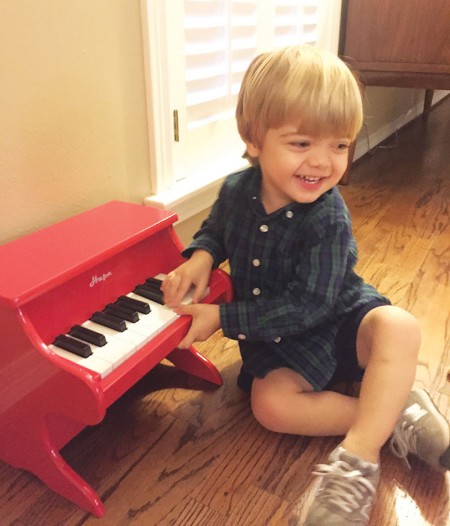 KEYS TO SUCCESS Almost 3-year-old Harry Markland (pictured) was rewarded with any toy he wanted for successfully using the potty for the first time. He picked a bright red toy piano.

Potty training is daunting. But as long as you have some patience, a sense of humor and Clorox bleach, as with any other transition in parenting, you’re all likely to survive it.

There are a lot of different methods. With the “wait-and-potty” method, parents watch for signals from the child indicating a need to do his or her business and encourage the child to use a potty, whether a small training toilet or the real one.

There’s also the disposable training-pants method, where you transition the child from diapers to throw-away training pants. Some parents let their children pick out real underwear, perhaps with superheroes or princesses on them, to encourage the child to want to wear them.

Another method, promoted by San Francisco-based preschool teacher Julie Fellom, among others, calls for three days of diaper-less and pants-less potty training. Fellom suggests setting up multiple portable potties around the house.

In addition to learning to use the toilet, children also need to learn how pull their pants back on, flush the toilet, and wash their hands. All in all, it’s quite the undertaking.

One classic move is to offer an incentive or reward. Buzz mom Meg Markland took this route when she started potty training her son, Harry. Her tactic was to let Harry pick out any toy he wanted for going No. 2 in the potty.

Harry successfully went, so Meg took him to pick out his toy. The results? Less than ideal. His choice was a bright red toy piano. “Do not ever tell your toddler that they can pick out whatever toy they want at the toy store,” said Meg, laughing. “This was our compromise from the bright pink baby-grand piano. The worst part is, he has yet to poop on the potty again, and I am reminded of that every time I hear him banging away on that piano.”

Meg and her husband Matt tried a three-day potty-training plan. She said she printed a 40-page PDF manual and read through the whole thing. “Two hours in on Day 1, we had already gone through 12 pairs of underwear, a whole container of Clorox wipes, and when my husband called to check on us, I was heading outside to fish diapers out of the trash,” said Meg.

She suggested a few tips for other parents trying the same route. “Have both parents home for reinforcement, lots of wine, and believe you need [the recommended] 21 pairs of underwear. Did I mention the wine?” she said.

Potty training can naturally lead to some messy situations. “My stubborn little boy,” said mom-of-three Kelly Miller. “He was over 3 and not willing to potty train at all.” Kelly had him on the waitlist for a Mother’s Day Out program. There was only one problem – all children had to be fully potty trained to attend.

He got a spot, so it was go-time. “We got the call and a 2-week warning that he could start Mother’s Day Out,” said Kelly. “So, power potty training began.”

The family went to a trampoline park during that time. “He had been doing pretty well, but with all of the fun, he managed to poop in his pants,” said Kelly. “He really didn’t like it. But after we cleaned up and left the pants and underwear in trash can, he was potty trained.”

Mom-of-two Lanie Towsley couldn’t help but laugh when her son Fischer went No. 2 outside in the backyard. She said his reasoning was because their two dogs, Guinness and Millie, pooped in the backyard. “Maybe a sign of solidarity with our four-legged friends? I don’t know,” said Lanie, laughing. “When I told him to get a plastic bag to pick it up like we do with the dogs, he just started bawling and got so upset and said, ‘That’s dirty!’ Kids.”

Fisher eventually started to do his business in the bathroom, but not quite in the toilet at first. “He’s also pooped on the bathroom floor, twice. That’s been real fun,” said Lanie. “But no-underwear has done the trick for us though. We spent a week at the beach, and because he was in a swimsuit the whole time with no swim diaper he started going potty in the toilet because he didn’t have the diaper safety net.”

And that, my friends, is the last of the potty talk this month – unless you have some tips to share. If so, comment under this story at thebuzzmagazines.com or email [email protected].