Cinco de Mayo Celebrations: A History Lesson and a “How-To” 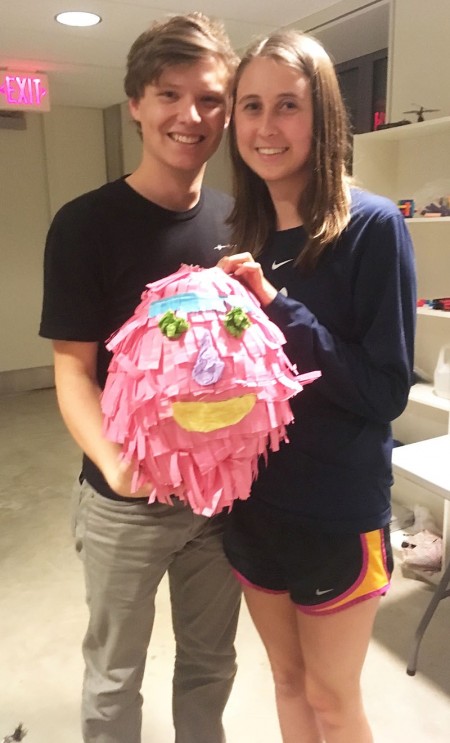 Rice University seniors Brian Gravesmill and Amy Fox made this festive piñata together.

In Mexico, Cinco de Mayo is celebrated with military parades, and doesn’t have the same party connotations that it does here in the United States. In fact, according to this Seeker post, the holiday was invented in California in 1863.

Regardless, it’s a good excuse to celebrate Mexican-American culture, so in light of this, I’ve come up with some ideas for celebrating.

Piñatas are a fun tradition that originated in Spain and were brought to Mexico. They consist of a papier-mâché shape filled with candy. They can be really fun to make, so try it yourself. Here’s a how-to.

These banners are a sign of Mexican folk art that can be seen in many traditional Mexican restaurants or places of gathering. They are also used for religious gatherings in Mexico. Make your own.

Brush up on your Spanish

I always encourage everyone to be at least conversational in another language. I took Spanish throughout high school and took a class in college and love it. You don’t need Cinco de Mayo as an excuse to practice your Spanish, but it’s a good reason! There are plenty of fun games online to practice.

The margarita originated in Mexico in the 1930s and has been associated with Mexican culture ever since. Some claim that it originated in Houston, though, so believe whichever story you want! Here are 28 recipes.

There are so many delicious Mexican dishes that go by the wayside in favor of queso. Try something more traditional like Mexican corn on the cob! Here’s a recipe.  Or try my favorite dessert of all time, tres leches.

Cinco de Mayo is a great time to hang out with friends and celebrate Mexican culture, but this year, try doing it with an eye toward tradition and history!