Families hit the road for baseball 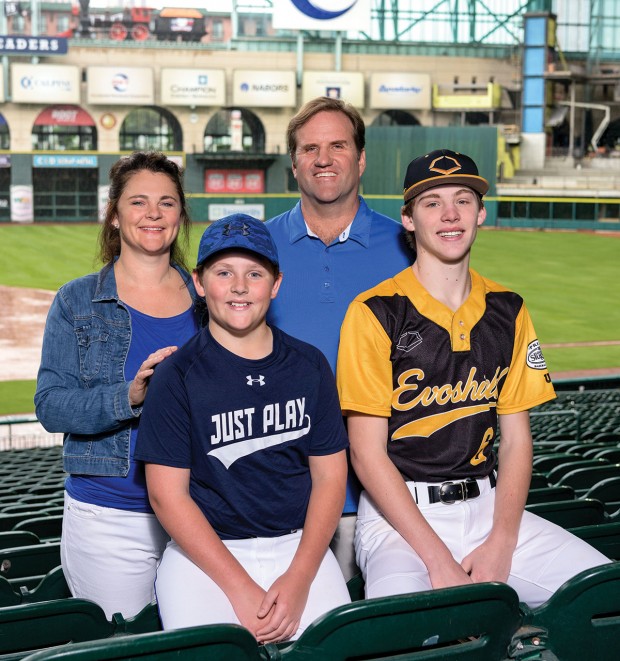 GOING THE DISTANCE Jen and Cory Moulton, with sons Reece (at left) and Cade, travel year-round for the boys’ baseball tournaments. They are pictured here at Minute Maid Park. (Photo: georgefloresphotography.com)

Last summer, Memorial resident Jen Moulton easily could have been named the ultimate baseball mom. She was driving her then-15-year-old son Cade from Michigan to a baseball tournament in the middle of Ohio, and she saw nothing but fields – corn fields, that is.

“It was a scorching hot June day, and row after row, mile after mile, field after field, there was only corn and cows. It smelled like manure!” recalls the outgoing Jen, with a laugh. “I was pretty sure I was going the wrong way and might even be in the wrong county. I was scared and worried we were going to be late to the game and was just about to turn around when literally, out of nowhere – out of this cornfield – emerged a brand new baseball diamond. Field of Dreams is real.”

Her story, like so many other baseball stories, is about dreams that are rooted in the love of the game – and the life lessons that come with hitting the road for America’s pastime.

Jen, husband Cory and sons Cade and Reece are not alone in traveling for baseball. Buzz residents log a lot of miles and hours for the sport. Memories are made as families travel for their own personal fields of dreams.

For the Moulton family, passion for baseball started early, with Jen growing up in a small town in Michigan and Cory growing up in Denver. “Both of our families raised us to love baseball,” says Jen. “My favorite memory of my Grandpa is going to the old Tiger stadium in Detroit with him and sitting in the outfield having a hot dog and holding my glove hoping to catch a fly ball.”

Jen and Cory grew up playing sports. (Cory played one year of football as a walk on at San Diego State.) Their sons naturally gravitated to sports as well. 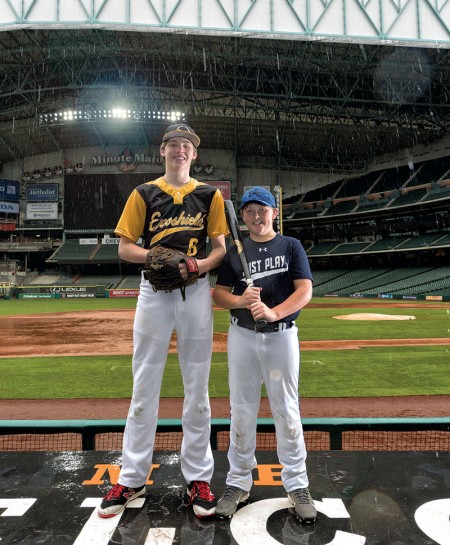 OUT OF THE PARK Brothers Cade and Reece Moulton (from left) stand on top of the Houston Astros dugout. Both boys play competitive baseball and are Astros fans. (Photo: georgefloresphotography.com)

The Moultons estimate they clocked in about 1,000 hours watching and playing baseball, and 6,600 miles traveling for baseball. Oh – and that was just for 2016. Don’t try to add it all up from the time Cade (now 16) and Reece (now 12) were 4 years old – that figure would be astronomical.

Cade played with different Spring Branch tournament teams in middle school and then on summer travel teams once in high school. Last summer he played on a team out of Detroit, Michigan. The Kinkaid School sophomore plays pitcher, first and third on the school’s varsity team and on the Evoshield Texas Tournament Team. Jen says the Kinkaid varsity head coach has been instrumental in Cade’s baseball development.

Reece, a sixth grader at Kinkaid, is following in Cade’s cleats and plays on the JPS Tournament Team. The traveling will continue this summer with the family following the boys around the country again for baseball.

“It has given us something to share as a family, something we all care about deeply,” says Cory, CEO of Southern Vanguard Insurance Company. “Baseball has also taken us to parts of Houston, Texas, and the United States in general that we would otherwise have never seen. While that seems like a small thing, I know the kids will always remember the small towns, dusty fields and long car rides with their family and friends. Reece’s team won a tournament last year, and the final game was very tight. After the final out, Reece immediately ran off the mound and gave me a long bear hug. Those kinds of memories are, in a nutshell, what baseball has meant to us: countless opportunities to share both victory and defeat with our kids.” 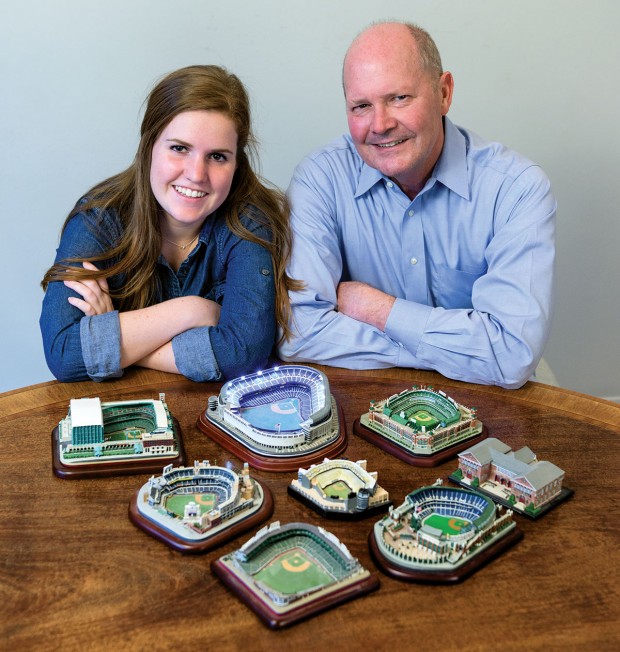 TAKE ME OUT Bonnie and Walter Bering have a collection of miniature MLB stadiums representing ballparks they have visited. (Photo: georgefloresphotography.com)

Another family going the distance for baseball is River Oaks resident Walter Bering and 21-year-old daughter Bonnie. But instead of playing baseball, they are watching it to the extreme, going on the road to visit every Major League Baseball stadium in the country. With 30 parks in as many cities, that’s a lot of ground to cover. But these die-hard Astros fans love their baseball road trips and the memories they have made as they have crisscrossed the country.

When Bonnie was 4 years old, Walter took her to Minute Maid Park for the first time.

“As season ticket holders, we went to many home games throughout that summer,” says Walter, a broker associate with Martha Turner Sotheby’s International Realty. “We enjoy the baseball, but more importantly, it became a fun father-daughter outing. In the summer of 2007, the Astros were away, and we were having baseball withdrawals. I asked Bonnie if she would like to see the Astros play in Pittsburgh. She jumped at the chance and we made quick travel plans to PNC Park.”

Dressed in Astros attire, the pair caught two games on that trip – and they noticed a family waving a poster board in the stands. Interested in what was written on the board, Walter went to take a closer look. “It had a list of all the baseball parks and the ones that they had visited. This family was making it their summer experience of visiting all the baseball parks in one summer. A lightbulb went off in my head: ‘Hey, wouldn’t visiting all the baseball parks be a fun summer trip each year? I can fill in the summer calendar with baseball trips for many years to come.’ And, that was my ‘Field of Dreams’ moment: Plan it and they will come!”

True to his plan, Walter and Bonnie have made it to a Major League stadium every summer – and then some. To date, they have gone to 15 parks for games: Minute Maid, PNC Park, Petco Park, Wrigley Field, Yankee Stadium, Dodger Stadium, Busch Stadium, Turner Field, Fenway Park, Citi Field, Globe Life Park, White Sox Field, Chase Field, Coors Field and Angel Stadium. And although they will root for the Astros if the Astros are playing, Walter says, “if we are visiting a non-Astros game, we will root for the home team.”

They have a routine when stepping foot into each stadium. “Our ‘to do’ list is to sample the local cuisine,” says Walter. “As a side venture, we are in search of the best ballpark hot dog. Thus far, my favorite hot dog is the Boston Red Sox Fenway Frank.” They never leave without a photo. “We will indulge one of our neighbors to take our photo in order to capture this piece of baseball history,” he says. “Once again, it’s all about the father-daughter experience!” 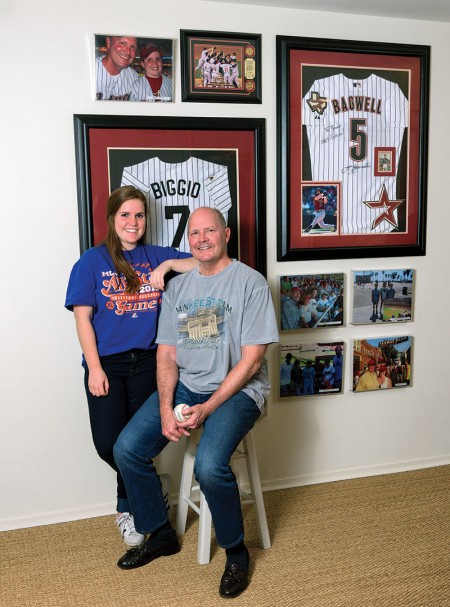 Bonnie, now a junior at Chapman University, says she looks forward to their annual stadium tour. “I think my favorite part of getting to tour all of these parks are the things we get to do because we are in the right place at the right time,” she says. When they visited Wrigley Field for a second time, they ended up buying last-minute tickets to a Billy Joel concert at the stadium. That’s the only stadium that they have gone to twice, because so far, that one is their favorite.

“It was one of the best concerts I’ve ever been to in my entire life,” says Bonnie. “It’s little things like that that I get to share with my dad that wouldn’t be possible without this stadium tour. One memory I’ll never let my dad live down is when we went to Citi Field for the Mets. Because it happened to be the All-Star Game, he made us leave early to beat the traffic, and right after we left Neil Diamond came out and sang Sweet Caroline!”

Walter and Bonnie have also started a unique collection along with their ticket stubs: miniature replicas of the stadiums. “I saw a vendor online that offers miniature stadiums of baseball parks,” says Walter. “I have a display in my bookcase that features the miniature stadium model with a photo of us at that stadium behind us. Some people collect stamps, but I collect baseball stadiums.”

They are both collecting memories that will last a lifetime. “I’m extremely grateful to my dad for taking me on this journey,” says Bonnie. “We’ve always been really close, but this is something we’ll always share. It’s hard to beat sitting with your dad on a summer’s day enjoying a baseball game in a new city – it’s made every summer an exciting one.”

And what’s up next for the pair this summer? “This year Bonnie has turned 21,” says Walter. “I figure it is only fitting that we venture to Milwaukee for a Brewers game. She can have her first beer in Milwaukee.”

See Jennifer Oakley's For the Love of Baseball: Hitting the road for America’s pastime for more baseball stories, plus a Baseball Pump-Up Playlist, from Buzz residents.