On top of team snacks 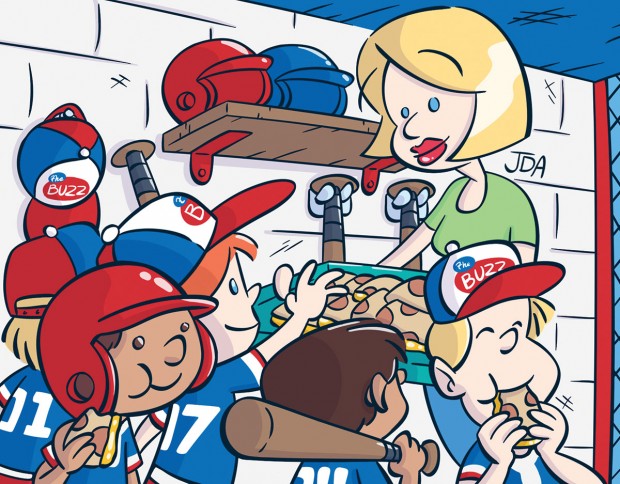 There are a whole lot of soccer games (or swim meets or tennis matches – insert your children’s sport of choice here) in the life of a family with kids.

Which means there are a whole lot of “opportunities” for each family to be in charge of team snacks. (Note that I use the term “opportunities” here, intentionally steering away from something more to-the-point, like “forced marches.”)

After a few games, or a few years, the snack thing gets pretty de rigueur. Goldfish and water, anyone? Whatever they’ve got at Target that’s individually bagged and easily transported usually wins, as long as it won’t prompt turned-up noses from starving players.

“I felt like by bringing Cuties [oranges] and cheese sticks I was being a rebel, because everyone else was bringing Goldfish and those granola bars with chocolate chips,” one Buzz mom of three boys says. When asked if she ever got any more creative than that, the mom said, “Last week I brought [the] coaches a 12-pack of Bud Light, but I don’t think that’s the kind of snack you’re looking for.”

Jason Reimers, a beloved track, basketball and football coach at The Emery/Weiner School, has seen it all in his nine years as a coach. “It’s been a hot-button topic every now and then,” he says. “We actually are working with our Athletic Leadership Council now, which is about 10 to 15 kids, to figure out whether they like when one parent brings a snack, or if they want to bring their own, or if they want Sage [the school’s lunch caterer] to bring.” Apparently the kids are partial to either a parent or lunch service.

The range of snacks is wide: “Some parents are bringing Jimmy John’s, and some are bringing a bag of Cheetos,” Jason says. “One time a mom or maybe the girl told the nanny, ‘We need to bring a snack.’ They brought a whole chicken! We weren’t sure how to divide the thing up, and the girl was pretty embarrassed.”

So avoiding the whole rotisserie-chicken option, how do we move beyond tiny crackers in a bag?

Miri Levy, who has three children playing sports in high school and middle school, is known for her homemade quesadillas. “I buy those Central Market tortillas; they make them fresh,” she says. “And I get the cheese that they grate for you, and I put it together in a nonstick pan to make it nice and crispy. No oil, no butter, and it’s really delicious, thanks to those tortillas. The key is to bring them fresh to the kids so that they don’t get soggy. So I wrap them individually in parchment.

“Sometimes for my own kids, I will put fresh spinach that I add, but I never do it for the teams, because I never know who will hate it or not.”

Miri says when she finds the freshly made Central Market tortillas still warm at the store, “I buy like 20 packs and freeze them. I have three kids, so I bring a lot of quesadillas to school.”

Mary Johnson’s 14-year-old son Ben has played Post Oak Little League baseball since he was 8, having played around town since he was 6. (Her daughter, 16-year-old Helena, swims, “but there’s not really any snacking in that,” Mary says.)

When Ben’s teams were young, Mary liked bringing sugary treats. “If the boys were down and blue, we’d go get a bunch of candy and put it in the dugout to lighten the mood a little bit and give them a little sugar kick.

“It would be so terrible to do it now that Ben is 14, but when he was in peewee, like 8 or 9, it was so much fun. But after peewees, they really frown upon that. A lot of moms will bring their kids tacos or hamburgers in the dugout, but as a coach, my husband never allowed that.”

Mary also believes that eventually the kids need to start planning their own snacks. “At this age, you’re old enough to start taking care of yourself,” she says. “It’s just a snack. You’re not going to die.”

To that point: Recently her son was playing in a baseball tournament with some older boys. “I overheard the tournament director saying that the [college] scouts coming to look at the high school boys look for two things: one, if mommy is bringing food to the kids in the dugout, and two, if the kids are talking back to the coach.

“So now that they’re older, if they want Pixie Sticks, they can go to the store and buy them.”