Jon Bass: From Bellaire to ‘Baywatch’ 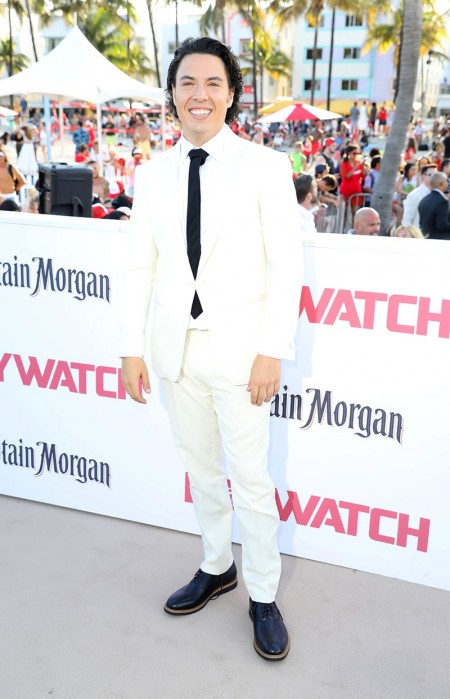 Jon Bass was in Miami and finally had a couple of hours to himself, so he decided to head to the beach. He was swimming around peacefully when he popped his head up and suddenly realized there was a sizeable group of people on the beach. Staring at him. Pointing their cameras.

He turned around, confused – was Zac Efron behind him? No. They were pointing at him. It hit him that the paparazzi had been photographing him while he was swimming.

There’s a reason. The 30-year-old actor is playing a character named Ronnie Greenbaum in the movie Baywatch. The remake of the popular 1970s TV show is directed by Seth Gordon and stars Dwayne Johnson, Zac Efron, Priyanka Chopra and Alexandra Daddario. That’s why Jon was in Miami, for the premiere. His character is an awkward lifeguard-in-training vying for the attention of attractive CJ (Kelly Rohrbach).

Jon, a 2005 graduate of Bellaire High School, is known for his work as Del Plimpton on Comedy Central’s Big Time in Hollywood, FL and as Phil Hirschkop in the 2016 movie Loving, and he’s had guest appearances on award-winning TV dramas The Newsroom, Girls and House of Lies.

I remember him as Fagin, one of the lead characters in Oliver back at (what was then called) I. Weiner Middle School in Houston. (I played an orphan in the chorus.) Even as a middle schooler, the age in which most students are awkward, he was funny and had a natural stage presence. He was goofy, with wavy, dark hair.

During his time at Bellaire High School, Jon continued learning and growing in the theater arts department, acting in various productions and taking the opportunity to direct his own play during his senior year. After graduation, he headed to Boston University, where he studied theater arts. He said he remembers returning home after his first semester and showing his mom what he learned in college: how to walk on his hands. “My mom actually was, like, really confused with what she had sent me to school for…,” he said.

After BU, he moved to New York City, “thinking that I was going to become ‘the next big thing,” he said. “I did not.” He got a job at a bakery – first, helping out at the counter and then switching to the delivery service. Then he performed in “some very bad Off-Broadway plays.”

A turning point was going to the Williamstown Theatre Festival in Massachusetts, an “incredible place,” he said, “where I met my ‘people.’” There, he met individuals who inspired him, plus his agents and his manager. That led him to audition for the popular musical comedy Book of Mormon. He thought the role of Elder Cunningham was perfect for him. But he didn’t get the part.

He still felt it was the right role for him. He took voice lessons weekly and kept working on the songs from Book of Mormon. A year later, he auditioned again. That time, he got the part of the standby for the national tour. “I only went on when the ‘main guy’ got sick, so there was a chance that I would never go on or go on very few times.” The show ran in Denver for a month, then in LA for three months.

During one of the LA shows, actor Jared Gertner got sick. So Jon performed in five shows. It just happened that a lot of the producers were there during those shows, he says, and liked what they saw. Three weeks later, he was on the plane to NYC to take over as the lead on Broadway after actor Josh Gad departed from the show.

For six months, he performed in Book of Mormon on Broadway, “an exhilarating and terrifying experience,” he recalled.

At the end of the Broadway run, he was cast in a small part (Mo) on the HBO show Girls. It was just one day of work, he said, but it was a revelatory experience. He realized he wanted to do TV and film. A few months later, he was cast as on Comedy Central’s Big Time in Hollywood, FL as Del Plimpton, the lead characters’ childlike friend.

“The show was not watched by a lot of people but is still, to this day, the greatest experience of my life,” he said. It led him to move from NYC to LA. During the show, he worked with comedians and actors Ben Stiller, Cuba Gooding Jr. and Michael Matson and formed relationships with a lot of the people he now calls his best friends.

After that, he had a small role on The Newsroom (Bree Dorry, the temporary substitute of Neal) and House of Lies (Marty’s cellmate Gabe) and also spent time writing a show for FX, which the network ultimately passed on. “But it was the first time I had ever gotten paid to write, which is a huge thing,” he said.

It was around that time that he got the call to audition for Baywatch. He was intrigued, but didn’t let himself get too excited. In this field, he said, “You face so much rejection on a daily basis that you kind of have to take everything you do with a grain of salt while also delivering the best performance you can. You want to be great but don’t want to ‘care.’”

Most of the time, nothing will come out of auditions, he said. So with Baywatch, he said he went in as prepared as he could be and thought it went well, but once he left the room, he went on with his life. Two months later, he found out he got the part.

“I was insanely happy,” he said, thinking of the opportunity to get to work with The Rock (Dwayne Johnson) and Zac Efron and (director) Seth Gordon. “I knew it was going to be fun, but I wasn’t prepared for how much fun it was.”

A moment that stands out to him was a day in which the cast was being photographed for marketing materials. He was standing next to Dwayne Johnson, arms crossed. “When you’re standing next to [people who look like] Zac Efron and Dwayne, you’re going to feel like s*** no matter what, unless you look like them,” Jon said. Then, Dwayne turned to him and said: “You have nothing to worry about. Own it, brother.”

“Hearing The Rock tell you to ‘own it’ is the coolest thing in the world.”

Reflecting on his career so far, he said it’s the story of “an actor’s life.”

“You face rejection after rejection in the hope that one person says yes to you. That this will lead to another door and another door. And hopefully Baywatch leads to my next door.”

Jon says he’s known since he was a child that he wanted to be an actor. 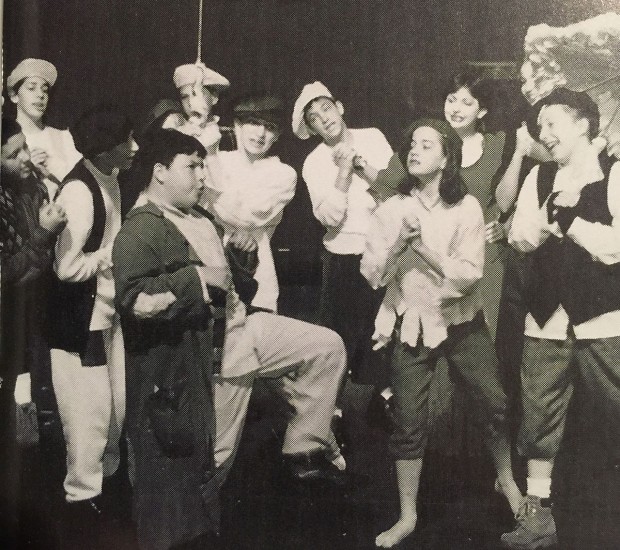 Actor Jon Bass (in front, on left) playing the character of Fagin in I. Weiner Middle School’s production of Oliver (played by Ariela Emery, pictured, on right) in 2000. Jon was in seventh grade at the time.

“I stopped maturing at the age of 8,” he said (I could hear him grinning through the phone). “It wasn’t really an option of, like, ‘Oh, well, maybe I’ll do something else.’ It was like, ‘No, this is it.’ And luckily I’m good enough so I get to pay the bills.”

His household of four kids – Oren, Rikki, Ben (he’s the third youngest) – was “loud enough” that the siblings were all constantly vying to outdo each other. “So we were all performers.” When he saw Rikki perform in a play at HITS Unicorn Theater, he told his mom, Rhonda, “I want to do that, too.” The next year his mom signed him up.

Jon gives a lot of credit to Larry Dachslager, the former head of theater at I. Weiner Middle School, who taught him about musical theater, introducing him to Woody Allen films and classic and alternative plays and musicals. “He was such an inspiration, constantly striving to not only make a great play but make sure you knew the history,” Jon said, and helped instill in him a good worth ethic as an actor.

He also said he owes a lot to Paul Munson, theater director at Bellaire High School, who really “allowed me to do my own thing,” and a space and confidence in which to learn.

“The Black Box Theater [at Bellaire] was really like my playground,” Jon said. “Mr. Munson was such an amazing facilitator, as well as Gail Silver, his right-hand woman, who was just making sure that the ship was always right.”

Besides hanging out in the theater, surrounded by creative energy, his memories of BHS days include hanging out with friends at each other’s houses. The best thing, he recalled, is that his house was only four blocks away, and so were most of his friends’ houses. So after school, he’d always find himself at someone’s house. “I did not do a lot of homework because of that,” he joked.

What else does he miss about Houston? The Tex-Mex – including Taco Cabana. Whataburger. And of course, his family.

His family will travel to LA to view Baywatch with him. After that? He’ll go “back to the grind,” he said.

His advice for anyone interested in pursuing acting: “If you decide to do this, make sure it’s the only thing you want to do because it’s tough. I’m making it sound real glamorous over here. But it’s not easy. It might look easy, but you better love hearing ‘no’ a lot because that’s most of the job.”

He’ll be traveling around Australia with some friends. Then back to work in Hollywood.