Magic granola – and other teacher gifts 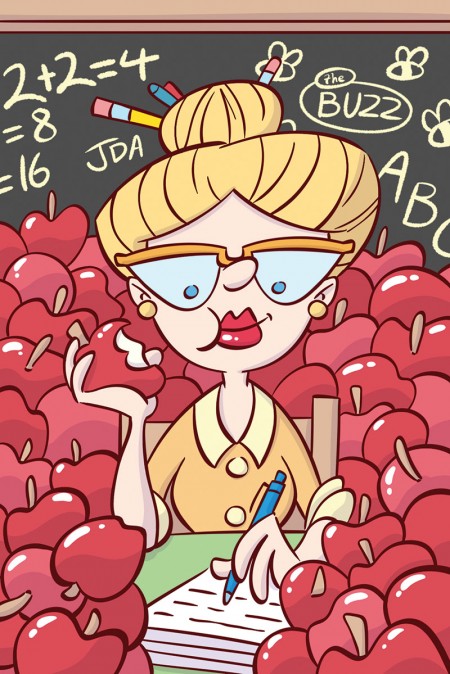 AN APPLE A DAY Daily apples to the teacher might be too much, but carefully chosen gifts can bring a smile. (Illustration: behance.net/runamokstudios)

There’s a granola from San Antonio’s Bird Bakery that my girls and I love. I mean love. Addicted. They package it in click-top mason jars, the empty versions of which litter my container drawer as evidence that this family has enjoyed more granola than we should.

So last May, when considering what to give teachers for end-of-year gifts, I ordered 20 jars of it, wrapped each with a grosgrain ribbon and had the girls write notes that we attached.

I wasn’t ready for the response. One teacher told Lucy, “My wife says that that granola is for a special kind of person!” Another wanted to know where she could get more. And for yet another, I swear it was the difference between two letter grades. We came out ahead.

It’s the big question in May – what are you giving the teachers? And the bigger question – what do the teachers think of those gifts?

Teachers say gifts run the gamut – good, bad and just plain off. Handles of liquor, anyone?

When recounting her worst-ever gift, one teacher says, “I once got a Jesus clock. His arms were the hour and minute hands. Depending on the time, he was either covering his privates or hanging on the cross.

“Another time, I got an engagement ring from an 8 year old. His mom called me, freaking out, because she didn’t realized he had taken it from her jewelry box!

“And please do teachers everywhere a favor, and stop with the apple stuff. We don’t need another apple coffee cup or apple-shaped notepad. I’m all appled-out.”

Note taken. But what do you all want? “The best gift ever was a full day at the Trellis Spa,” the same teacher says. “It was awesome.”

Another elementary school teacher counts off best-evers: “Massage gift certificates, gift certificates to restaurants and stores, orchids, succulents, movie tickets, and, with an extra star [so like a teacher], a mani/pedi to a salon the teacher frequents.”

JoAnn Klar, a nurse at The Shlenker School, says that planning yields the best results. “When my son, who is now 26, was at Metropolitan Montessori School at Christ Church Cathedral, the parents did [a teacher information form], and it turned out to be a big hit. Some teachers were reluctant to fill it out, saying it felt presumptive. But parents are going to give gifts [anyway].... If you’re going to get a gift, it might as well be something you’d want!”

The forms would be left at the school’s front desk for parents’ reference. Questions included: What would I enjoy receiving? I would absolutely love to receive… My hobbies are… I collect… I like the following places to shop, eat, explore… My favorite charities are… I do not wish to receive…

One parent of three young children and former elementary school teacher gives gifts she would have wanted as a teacher. And being a former teacher, she’s super creative with her choices.

“For the holidays I did a tube of brown paper, curling ribbon, scissors and tape with a little poem about wrapping your gifts,” she says. “With those kinds of gifts, most of it will be disposable, but there will be one thing to keep, in this case it was the scissors.

“I’ve given infinity scarves before, not over-the-top ones, and said something like, ‘We love you infinitely.’ I’ll buy things when I think about it and Amazon them to the house and keep them in a closet. If I see something I think will be cute, I’ll write it down on a running list. Or I’ll go to the Target dollar bin. They had cake plates for $5, so I picked them up and I think I might do a fun cake cutting knife and a gift card or small Nothing Bundt Cakes, with a note saying, ‘There’s no bundt about it, you’re the best teacher.’ The cake gift card may be $5, but they’ll have the cake platter afterward.”

This mom finds inspiration on Pinterest. “If you search for teacher-appreciation gifts, you’ll find a lot of ideas that will spur others,” she says. “It’s a jumping-off place.

“It’s totally a creative outlet for me,” she says. “I probably choose to spend more time than I need to, but only because I like doing it.”

Best gift she received herself? “As cheesy as it sounds, the hand-written note from the student or even a parent just saying how they feel about you is very meaningful. You do remember those over time. Something as small as that is very impactful.”