Y’s greeter has message that sticks 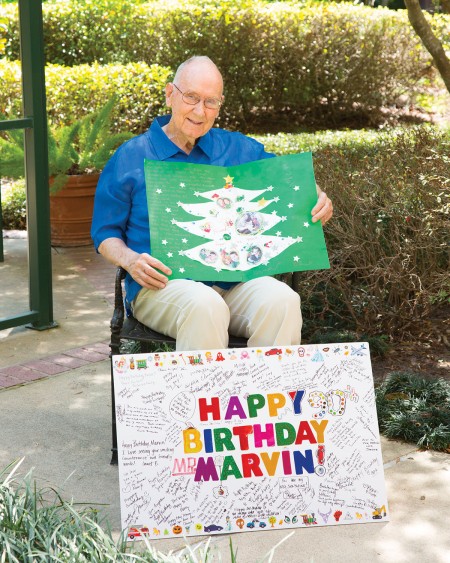 NINETY YEARS YOUNG Marvin Smith holds onto the special cards and signs he has received during his nine years as a greeter at the YMCA. (Photo: lawellphoto.com)

Mr. Marvin, 90 years old and a trim 6 feet tall, sits just inside the front door of the Weekley YMCA five mornings a week, sometimes with chatting company and sometimes solo. Always, he keeps an eye out for the door.

When it opens, Marvin Smith smiles. He greets everyone who walks in or out of the gym, offering a “Welcome” or a “Have a lovely day” with the voice of a radio announcer and often a turn-of-phrase from a time past. The adults smile quietly and hurry by, or linger and greet him back: “Hi, Mr. Marvin. How’s it going?”

But it’s when a child lays eyes on him that it becomes clear how special this man is. He’s Santa Claus and the Easter Bunny. He’s everybody’s Grandpa.

Children race toward him. His famous sticker box is a coveted treasure trove. With each sticker he gives, Marvin breaks into his well-known and well-loved refrain.

“The message from the beginning has always been the same,” says Marvin. “I tell them, ‘I gave you the sticker so that when somebody sees it, it says that you and I are friends ’cause I gave you the sticker! The second thing it tells you is that you are a wonderful, kind, loving, generous, beautiful young person. Everyone that knows you loves you and respects you and thinks you’re special. But nobody in the world will ever, ever love you more than your mom and daddy, maybe grandma and grandpa.’”

Marvin has a presence and persona to match his generous words. Born in St. Louis in 1926, Marvin is the son of a carpenter. “Our life was very ordinary. I was a good student, a little fellow, tiny. Because we didn’t have very much, I always had an interest in making a buck or two for myself any way I could.”

His memory, though he thinks it is failing him, is enviable. While recalling the names of schools, employers, cities and friends, he sprinkles them with charming anecdotes.

He recalls his mother’s advice upon his enlistment in the Navy in 1944. “She would preach to me ‘Don’t get tattoos! But if you must, get your social security number on the inside of your arm so at least you’ll have something useful.’”

A navigation specialist on an aircraft carrier during WWII, Marvin slept beneath torpedoes, witnessed the Tokyo Bay peace signing, and can remember the name of every ship he encountered.

His most memorable encounter, though, came after the war when Marvin met his wife, Jeanne.

“When I found out she was the only switchboard operator at nighttime, I knew that if I picked up the phone she would answer. I hadn’t been able to get the time of day out of her otherwise. One night a light bulb came on: It doesn’t cost anything to pick up the phone and get the operator. What if I can get this beauty to talk to me?” They wed soon after on St. Patrick’s Day, 1946 and were married for more than 40 years. 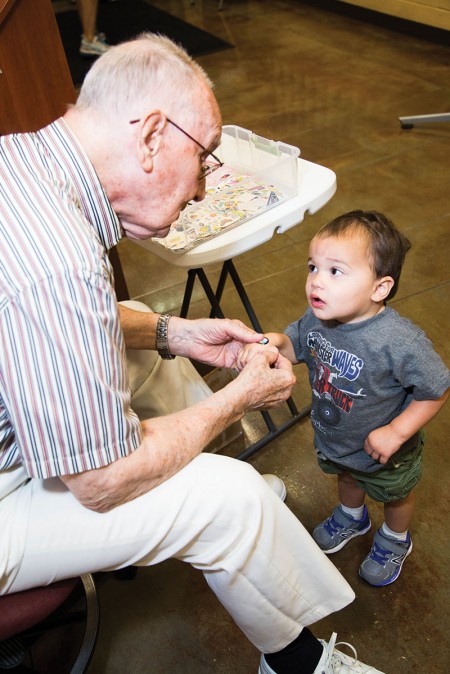 Marvin and Jeanne moved to Houston in 1963 when he found work in the oil and gas industry. Marvin climbed the ranks as an engineer for Austral Oil, headquartered downtown. He and Jeanne raised their two children, Mark and Kelly, in their Meyerland home where Marvin lived until four years ago.

Marvin lost his beloved Jeanne to cancer in 1988. The following year, he had open-heart surgery. His long-time employer was closing its doors, so Marvin retired. He took to golfing with friends.

A few years later, however, Marvin’s time of leisure was harshly interrupted. He had invested heavily in a trusted friend’s company. Disaster came by phone. “I got a call from the FBI. That’s when I found out I had nothing,” says Marvin. He says he had been swindled out of his retirement savings. The SEC charged Marvin’s broker “friend” with stealing funds from at least 24 investors in the Houston area.

Marvin, in his seventies, searched for a job for the first time in more than a decade.

“Technology had changed. Nobody wanted to hire an old man. I hit the panic button. It was my lowest of lows. I never wanted to be a burden on anyone.”

Marvin describes the tough years that followed. He sold vacuum cleaners door-to-door for a small income. He moved his ailing mother into his home and did what he could to care for her.

“Her health had turned bad about the same time as this money problem happened to me,” says Marvin, with clear affection for his mother. “All of a sudden, there were two old people on nothing but social security, and I didn’t have enough money to keep us going.”

Thanks to the generosity of a family friend, Marvin was offered a job at a title company. He spent the next 10 years working data entry and caring for his mother. “Everything we had to eat I cooked in the microwave, and she never complained.”

After his mother passed away and his most recent job was outsourced, Marvin found himself in the job market yet again.

Opportunity arose while Marvin was exercising in the Weekley YMCA gym on Stella Link. A regular exerciser since his early twenties, Marvin says it has always been of great value to him to stay close to a gym. This was the case in 2008 when a friend pointed out a job posting on the YMCA bulletin board.

“Greeter is what it was called,” says Marvin. “I didn’t understand what it was all about, but I knew it was something I could handle. There were no particular guidelines, just help people any way you can.” He was hired immediately. 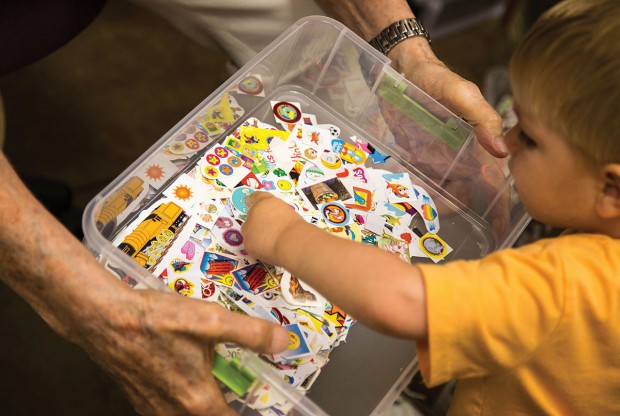 His first day on the job, Marvin noticed the many young children he encountered. “The second day, I brought stickers in,” he says. “It was just an easy something for me to say something extra nice to make them feel good.” And so, “Mr. Marvin” and his newest legacy began.

The original stickers, Marvin says, were left over from his wife’s supply as an art teacher.

“When I lost Jeanne, I just closed that drawer in the office, and I probably never opened it until I got this little job. I remembered having the stickers and I thought this is a good place to use them. I’ll give them to the kids.”

Now, those stickers have a place in many a child and parent’s heart.

“When you are little, it makes your day,” says Noah. “My little brother Brock would come home and say, ‘Yay! I got a sticker from Mr. Marvin!’ Then, he’d walk around the house with a little sticker book and say exactly what Mr. Marvin said and put it on your hand as if he were Mr. Marvin. He’d say, ‘Your parents love you and you’re really special.’”

“I love that he pours that message into them,” says Noah’s mom and Braes Heights resident Linda Barcot. “How often do you have anyone that focused on the words coming out of their mouth toward kids? Mr. Marvin very sweetly and intently looks at them, talks to them, and makes eye contact with them. He is a neighborhood treasure.”

In Marvin’s West University apartment are treasures of his own. The walls of his self-proclaimed “bachelor pad” are covered with beautiful paintings by his late wife. A sampling of his own artwork towers above him – two paintings of a man and woman in traditional Asian clothing. Marvin meticulously restored the antique canvases by hand. In the corner, a beautiful framed picture of his daughter is poised prominently. Marvin lost her to breast cancer last year. Near the kitchen sits a black and white photo of young Marvin and Jeanne, and nearby is a collection of snapshots of Marvin’s loved ones, including his two grandchildren, two great-grandchildren and sister – all of whom live in Florida.

But most noticeable are the glitter-covered poster boards, photo collages, homemade cards and hand-drawn pictures that line Marvin’s dining table – all gifts from the children he has met the last nine years.

“The surprise to me is that so frequently I have their absolute, undivided attention,” says Marvin. “There’s nobody in the world but them and me at that time. That is a special feeling. I’m convinced that the kids are better-directed kids because of the conversations we exchange. They may forget it, but I’ve got a feeling they won’t. It’s been a great source of pleasure to me, probably more than anybody else.”